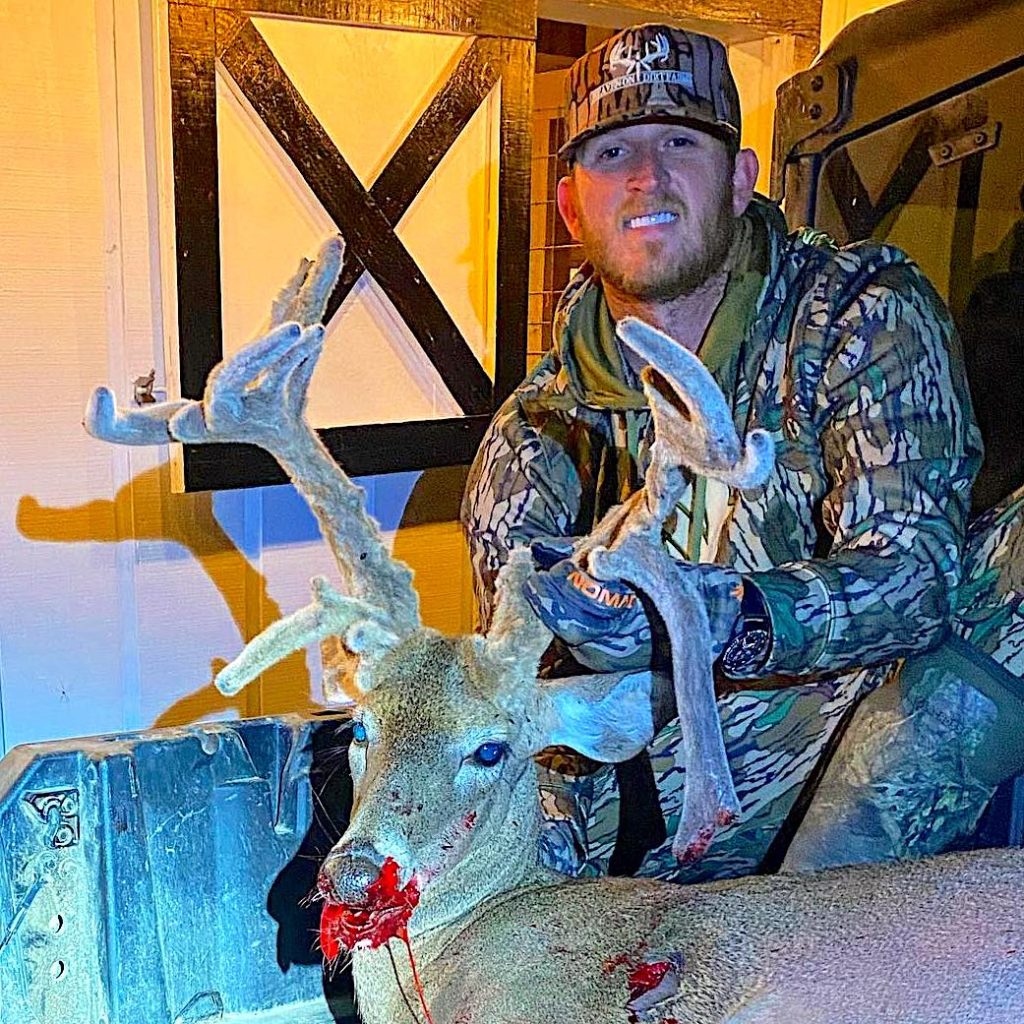 Cryptorchid buck had “at least” 14 points

Sitting in his Nashville studio on Oct. 21, Taylor Phillips of Sanford, NC got a text showing a trail camera photo in Lee County that changed his plans for the week, leading him to killing a 14+ point cryptorchid buck on Oct. 23, 2022.

The buck had such a crazy rack that Phillips wasn’t sure how to count the points on it.

“I counted 14 for sure, and it was just hard to say what else I should count after that. It’s just something you have to see up close to understand,” he said.

And the number of points isn’t even what makes it a crazy rack. It’s a gnarly mass that is unique for many reasons.

Cryptorchid bucks, often called crypto bucks, have a birth defect involving their testicles. Sometimes mistaken as “antlered does,” cryptorchid bucks maintain velvet-covered antlers throughout their entire lives, never losing velvet or dropping their antlers as other bucks do every year.

Phillips shot the deer with his Ravin crossbow at 49 yards. But it wasn’t an easy shot. Even though he felt comfortable enough to pull the trigger, he said doubts immediately crept into his head.

The day of the hunt, things just didn’t go smoothly.

“Everything went wrong honestly,” Phillips said. “That morning, I got in the stand at 6:26 a.m. and later found out my trail cam had taken his photo there at 6:06. So I missed him by 20 minutes. Then I got back in the stand that afternoon. And nothing. No sign of a deer all afternoon,” he said.

He stayed put, hoping his target buck would show up before dark.

“With about 30 minutes of shooting light left, I looked up from my phone after getting a text and saw a 4-pointer walk straight to the corn,” he said. 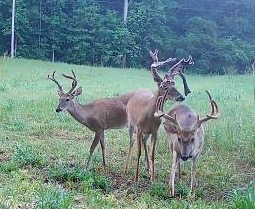 Phillips checked his crossbow, which was mounted on a BOG tripod. His boots, which he’d removed earlier due to the heat, were at the base of the tripod, hindering him from adjusting it to his liking. He fiddled around, trying to get things straightened out when the big buck suddenly appeared.

“I happened to have my range finder in my hand. He walked out at 11.8 yards. I about had a heart attack,” he said.

This deer’s close proximity was a problem because the tripod wouldn’t allow him to aim that far down at such a harsh angle. Again, he waited.

The deer walked out farther away, but still, Phillips didn’t have a clean shot. The buck moved again, but not in the direction expected. Cramped in the small box blind, Phillips wrestled his boots, the tripod, the seat and the walls of the blind, finally getting his crossbow in position.

By now the deer was on the verge of being out of the range Phillips was comfortable shooting. And it wasn’t slowing down.

“I finally just yelled at him ‘hey!’ Phillips said.

The buck stopped. Phillips immediately pulled the trigger. And just as immediately, he heard what he thought was the thwack of his arrow hitting the deer.

After about 10 minutes of trying to calm himself down, he called his brother-in-law.

“I told him I’d shot him but that I wasn’t excited. I didn’t feel good. And I said that I was going to get down and just try to find blood,” he said.

After 20 minutes of looking and not finding blood, he started over from a different angle. He found a tiny drop of blood. Then a little more. He went and got his side-by-side, came back and found a lot more blood.

Not long after that, Phillips found the deer wrapped around a tree.

“Once I saw him, I kind of freaked out. It’s the biggest deer I’ve ever seen in my life,” he said. “My neighbors called to see if I was okay and I told them I’d shot the buck. It was really exciting.”

Something else made it a special moment for Phillips.

“I just bought this farm this year. It was my dream farm. And growing up, I didn’t have any land to hunt. If I was going hunting, it was because a buddy was taking me on his land. So to be able to capitalize on this and kill the buck of a lifetime on my own land within the first year of purchasing it, it just left me pretty speechless,” he said.

“Being in Nashville and making a living writing songs, and being able to have the success I’ve had and that giving me the opportunity to purchase this property a mile from where I caught my first fish, a mile from where my grandparents house was, it honestly brought tears to my eyes. It’s something I’ll never take for granted.”

“It’s exciting for me, because now I have the opportunity to get a friend involved in the outdoors and hunting that might not have had that opportunity otherwise. Now I can be that friend like I had, that gave me the opportunity. I feel like it’s all been heaven sent,” he said.

To commemorate the hunt and the buck’s uniqueness, Phillips is having a full body mount created by Taylor’s Taxidermy in Lillington. He hopes to have it back in time for the 2023 Dixie Deer Classic in Raleigh in March.

–Taylor Phillips wrote the #1 hits “Hurricane” by Luke Combs, as well as “Good as You” and “Homesick” by Kane Brown. Listen to more of his music by clicking here.

Congratulations to Phillips, who is now entered in our Bag-A-Buck Contest and in the running for these monthly prizes and the Grand Prize package:

Jonathan Wall bagged this 8 point 205 pound Union County, NC buck on November 18 in Unionville, NC. A Local taxidermist stated over his 30+ years of being in this business this is in the […]