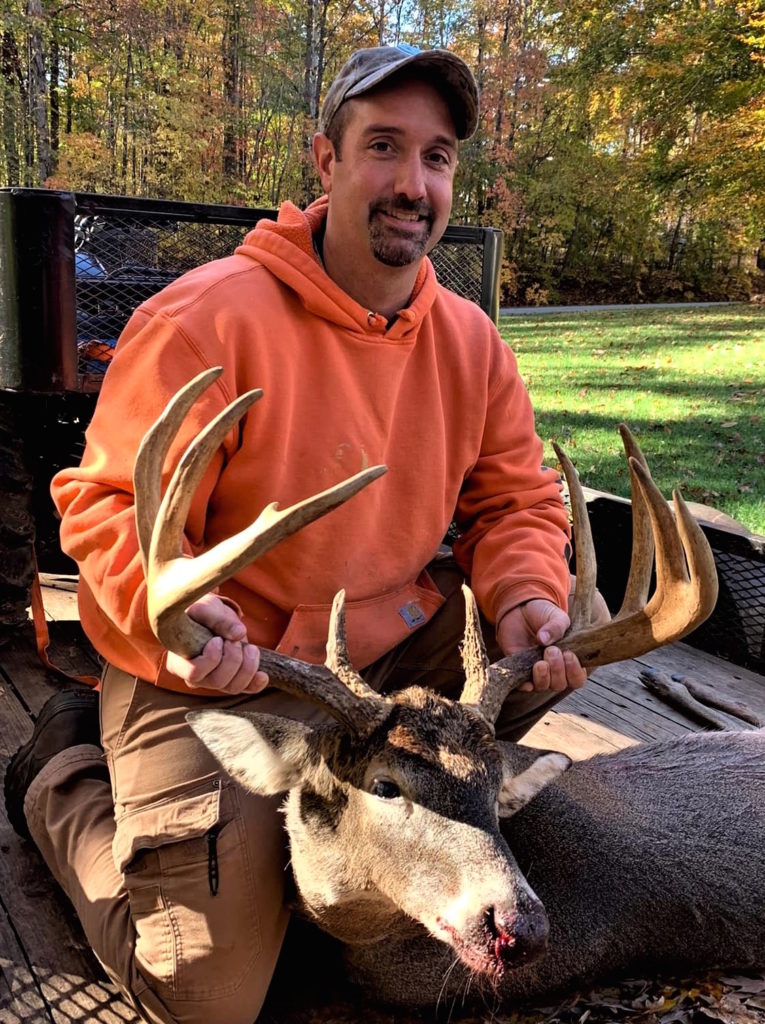 Eric Bell of Statesville, N.C. killed an Iredell County trophy buck on Nov. 13, 2021 during a morning hunt. He shot the buck with a .50-caliber CVA Acura muzzleloader. His pursuit of the deer proved that sometimes half a rack is better than no rack at all — especially when it helps a hunter chronicle the travel habits of a specific buck.

In September, the Statesville native set the camera at a spot he usually hunts. And it snapped the unusual photo on Sept. 7.

The buck was curious about the camera and put his face against it, cutting off just enough of the image to show only one antler.

“It had good mass and was wide. Plus, last year, I’d shot a 22-inch inside-spread 11-pointer at that same property,” he said.

The hunter supplied food to keep the deer coming around

After getting that trail cam photo, Bell dispersed corn near the bottom of a ridge and stream. Apples were higher close to the top of the hill. The bottom stand was a Field & Stream ladder stand that stood 23 feet tall. The more elevated stand was a climber.

“In all, I had 200 pictures of the deer, every day until the Friday before opening day of muzzleloader season,” he said. “He came in the previous morning then he disappeared. I don’t think I spooked him. It’s not a big property and a pretty well protected spot. My dad has lived there 70 years.

“When I saw him (on camera) he never put his head down until he got to the corn or apples. Then he’d eat for 30 or 40 minutes.”

The day Bell shot the buck was a week after the start of smoke-pole season. He reached the ladder stand 30 minutes before shooting light that day.

“Then I heard a crunch behind me, and this buck had his head up, sniffing the wind,” the hunter said. “I think he was scenting the does that’d come through earlier.”

The left-handed shooter had to spin to his right to seat the CVA’s butt to his shoulder and look through the Nikon Pro Staff scope.

“It was only a 15-yard shot. So it was easy to find brown,” he said. “He’d walked right under my stand and headed to the creek bank where the other deer had gone.

“It happened so fast I didn’t have time to get nervous. So I pulled the trigger. It was stupid easy.”

The buck dropped in its tracks.

“After I sat down I shook. And when I tried to climb down the ladder, I was shaking,” he said.

“I run with a couple of buddies who hunt Ohio because they got tired of Iredell, which isn’t known for big deer or a lot of deer,” Bell said. “But when they saw his rack, they said they shoulda stayed home.”

Congratulations to Bell, who is now entered in our Bag-A-Buck contest. Click here to enter your buck in the Carolina Sportsman Bag-A-Buck contest. We’re giving away some great monthly prizes, as well as a Grand Prize that includes a Millennium M25 hang-on deer stand and a 2-man, 2-day hunt for deer and hogs at Cherokee Run Hunting Lodge in Chesterfield, S.C.

After hunting the deer since the middle of archery season, Carter Shook finally killed this piebald buck in Caswell County, N.C. […]