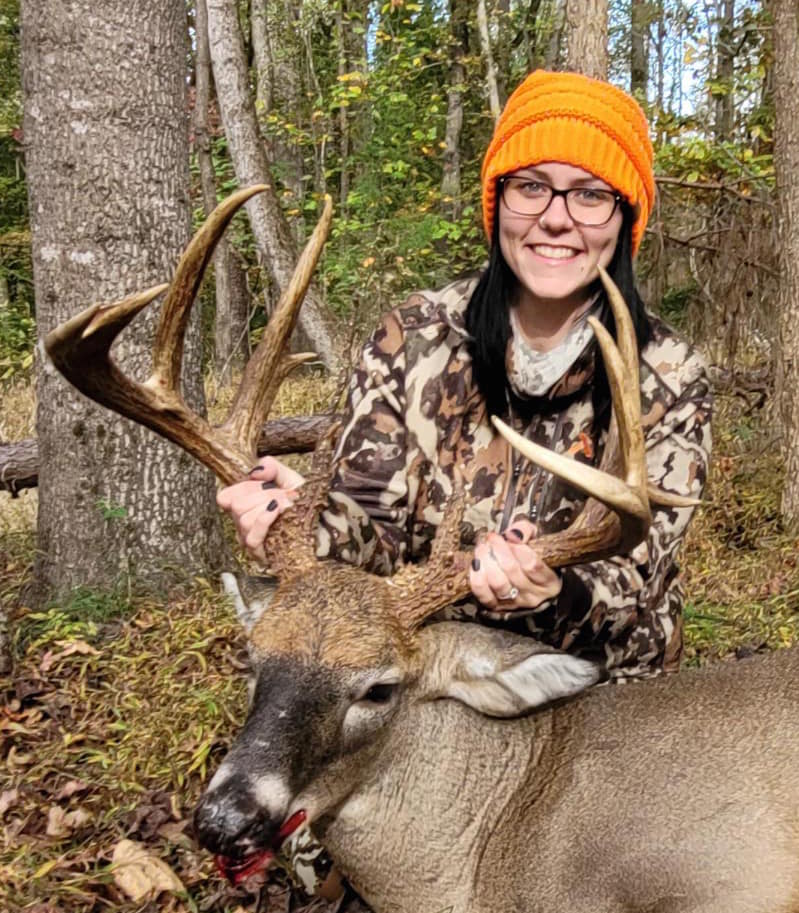 She popped the 12-pointer from a mobile stand

Brittany Godwin of Timberlake bagged back-to-back bucks in Person County Nov. 2 and 3, likely making her the only hunter in North Carolina’s 436 years to harvest a trophy buck from a boat trailer. One buck was a 12-pointer that has green-scored 162 1/8 inches.

Hunting November 2 — sans hunting-partner/husband Tim Godwin — she used a .50-caliber CVA Optima muzzleloader to drop a small-rack nine-pointer. That experience was thrilling but couldn’t match the following day (with hubby also in the boat-trailer blind) when she drilled the 12-pointer, her all-time best.

“Tim had built a home-made box blind and put it on an old boat trailer,” said Godwin. “The wind wasn’t cooperating at our buddy stand. So he hitched up the boat trailer the day before, and hauled it to the edge of a soybean field.”

She likes hunting from the boat-trailer blind because she can wear a pair of her favorite Crocs shoes. She’s also sheltered from wind and weather, and it provides scent protection.

The Godwins were certain of the large-rack buck’s presence at the bean field and nearby woods. That’s because they had a year’s worth of his trail-camera images.

“His rack blew up a lot,” she said. “(This year) he was a main-frame 5×5 with two ‘kicker’ points. It surprised me when I saw him (live). Trail-camera pictures didn’t do him justice.”

12-pointer stayed just out of range since beginning of season

Once the 2021 muzzleloader season began (Oct. 30) in N.C.’s Central Deer Region, the pair had tried without success to get within range.

“I saw him every time I hunted, but he’d be 100-plus yards away,” Godwin said. “I’d much rather use a bow or rifle (than a muzzleloader).”

But her husband had zeroed Godwin’s smoke-pole scope at 130 yards. It was an easy decision to hunt with a longer-range weapon.

That day after taking their daughter to a school-bus stop, they reached the boat-trailer 20 minutes later.

“At first a little buck and a doe came out,” she said. “But he got wind of us, and they took off. We were talking when my husband said, ‘There’s the big one.’ ”

Brittany looked through the rifle’s Konus scope and saw her target. As it walked toward the decoy, her husband banged antlers together, causing the buck to halt.

Brittany has been hunting since she was a kid

But when she squeezed the gun’s trigger and the hammer fell, they heard a click, a micro-second delay then a boom as 100 grains of Blackhorn 209 powder ignited, pushing a Shockwave sabot bullet out the muzzle.

“I didn’t know if I’d hit the deer, but my husband said I had,” she said. “It kicked its back feet, the tail went crazy, and it ran into the woods.”

The pair waited an hour then found blood at the woods’ edge and tracked the buck 150 yards before finding it.

“I started hunting when I was six or seven with my grandfather, Johnny Kincaid of Churchville, Va., and my uncle, Fred Collier, of Vance County,” Brittany said. “I never thought about shooting when I went with them. I never dreamed I’d shoot a buck like this one.”

Congratulations to Godwin, who is now entered in our Bag-A-Buck contest. Click here to enter your buck in the Carolina Sportsman Bag-A-Buck contest. We’re giving away some great monthly prizes, as well as a Grand Prize that includes a Millennium M25 hang-on deer stand and a 2-man, 2-day hunt for deer and hogs at Cherokee Run Hunting Lodge in Chesterfield, S.C.