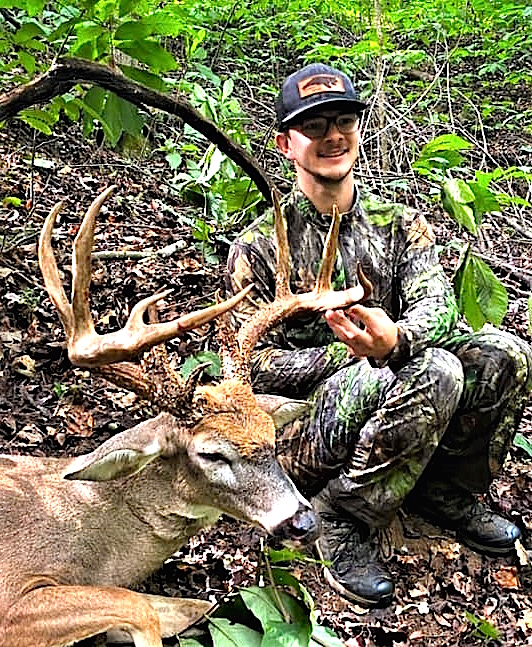 Dawson Durham, who recently moved to Baltimore, Md, made a long-distance trip to kill a 5×4 mainframe 11-point buck in Stokes County on Sept. 19. The buck’s rack has been gross-scored at 146 6/8 inches.

Dawson landed a job in physical therapy with the NFL’s Baltimore Ravens earlier this year, which meant leaving his deer property behind. But modern technology solved the problem.

“I’ve hunted all my life, and I knew I’d return home, even from 364 miles, if it was worth it,” he said. “So I bought 15 Tactacams. I didn’t want to drive that far without good reason.”

Durham wasn’t around to sling corn or other attractant foodstuffs to concentrate deer in front of his trail-cams. But his hunting area was covered by a prime natural whitetail food — white oak acorns. Durham figured the falling mast crop would lure bucks to his trail cams, which would tell him when to pack his bags for a return home.

“I chose to hunt an oak flat between a creek that had two branches in a valley between two steep hills,” he said.

He focused the web cameras at trails he knew does walked to reach the oaks.

“I never see scrapes or rubs at this spot until October,” Durham said. “And I had trail cameras out for four months and hadn’t seen this buck. But the last time I went in there, tons of leaves had been kicked over where deer had pawed the ground.”

He set his Tactacams up to send photos to his cell phone each morning.

In Baltimore, he saw images of his target buck from Sept. 15, and for the next three days.

“After the first one, I knew I’d better come home,” Durham said.

That Friday, he drove the 6 1/2 hours south, reaching his parents’ home at 2 a.m. The next day, he cut shooting lanes near the tree where he’d placed a Summit climber.

Fifteen minutes after light, he heard a noise behind him, looked down and saw the big buck headed for the oaks flat. It passed beneath his stand.

“I waited for him to get 12 yards from me and made a sound ‘mehhh,’ with my mouth, and he turned,” he said.

He’d already reached full draw with his Prime compound bow that held a Gold Tip arrow and a Montec broadhead. He released the arrow, which hit the deer’s left side. Then he nearly hyperventilated. It was his first bow buck.

“I climbed right out of the stand,” he said. “And I didn’t wait. I was excited and didn’t look for the arrow or the buck. I left and called my friend, Mark Tucker.”

When they returned, they followed signs of a hit and found the heart-and-lung-shot 11-pointer 40 yards from Durham’s stand.

Durham is now entered in our Bag-A-Buck contest. Click here to enter your buck in the Carolina Sportsman Bag-A-Buck contest. We’re giving away some great monthly prizes. And the Grand Prize includes a Millennium M25 hang-on deer stand and a 2-man, 2-day hunt for deer and hogs at Cherokee Run Hunting Lodge in Chesterfield, S.C.

Zack Satterfield of Reidsville, N.C. killed an 8-point trophy buck in Rockingham County on Oct. 30 during an evening bowhunting trip. […]

Declan Lee Lewis shows off the buck he killed on opening day of 2021 in Columbus County, N.C. […]