Rodney Donald is catching crappie under boat docks and around brush piles on Lake Hartwell. He said the bite is great and should continue for the foreseeable future.

“The fish are stacked in there like cordwood from 7 to 15 feet deep,” he said on a recent trip when watching his side scan screen. These crappie were suspended under a boat dock, where he finds many of them this time of year.

Donald fishes for crappie on Hartwell from January until April when his lawn care business moves into full swing. So before the spring, he’ll spend a lot of time fishing boat docks and brush piles almost every day.

The angler said in January and February, the air temperatures can hover between the 30s and 40s. The water temps will be in the 40s and 50s. This keeps crappie moving between boat docks and brush piles.

“The crappie will be suspended under certain boat docks. Or as the water temperature warms up, they will move onto deep water brush piles,” he said.

When looking for quantities of fish, Donald likes to fish the upper side of the Tugaloo River. For bigger crappie, but fewer numbers, he’ll fish the lower side. Over the years, Donald has learned which docks will usually hold fish.

After reaching a dock that’s produced before, he checks his electronics to see how deep the crappie are suspended.

“The fish will usually be suspended between 10 and 30 feet deep around boat docks,” he said.

Once he knows the depth the fish are holding, he either pitches or vertically jigs a 1/16-ounce homemade jig in chartreuse/black or sliver/black around the sides of the dock. He lets the jig drop to the bottom, then “slow rolls it back up,” always watching the line for a bite.

Donald said one trick in catching these suspended fish is by counting down as the jig drops while constantly watching the line for any movement. He uses 6-pound-test high-visibility monofilament line to help him detect strikes. 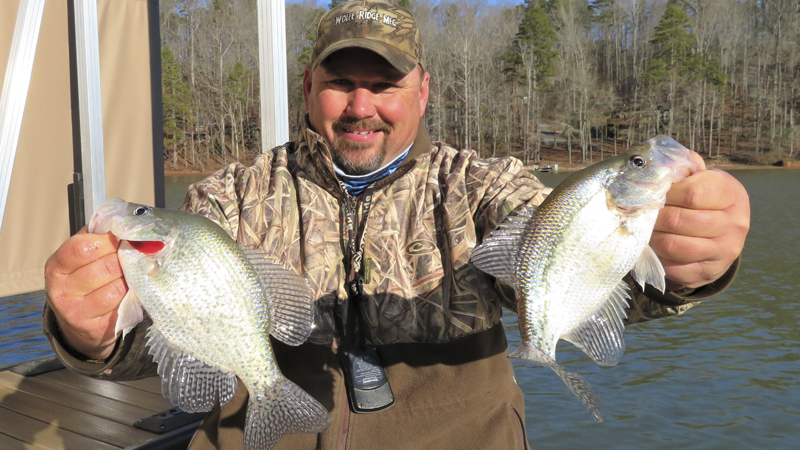 Donald alternates between jigs and minnows until the crappie let him know which one they prefer. He said this changes from one day to the next, and even from hour to hour on some days.

When using live minnows, Donald uses a sliding float rig and adds two small split shot weights above a No. 2 gold hook. This time of year, he prefers small minnows. He takes three to five dozen per trip.

“As the sun comes out and warms the water, the fish will move around, and into the darkest part of the dock,” Donald said.

As the water warms later in the day, Donald moves to brush piles in coves around 20 feet deep. Still using his side scan, he checks for fish around a brush pile. When he finds crappie, he uses the same jig and minnow tactics as he does for the docks.

Donald believes too many anglers let great crappie fishing pass them by because it’s winter. And even though he said finding crappie is pretty straight forward, it’s not always that easy to get them to bite.

He also said he likes cloudy days better than sunny days. And muddy water, he said, does not seem to impact the bite. He believes anglers should always bring both jigs and live minnows this time of year.

“Some days they will hit the minnows best, and other days jigs,” he said.

The crappie are biting consistently, especially around deep brush piles throughout the Carolinas, despite the nasty weather this February has brought us. […]