Crickets are bait of choice for Cooper River panfish

Anglers are catching big numbers of chunky bream in the Cooper River, including bluegills, shellcrackers (and hybrids of the two) and redbreast bream. This is old-fashioned fishing with no fancy electronics required.

Capt. Joe Dennis of Captain J Hook Charters has been putting his clients on these hand-plus sized fish throughout the summer. He uses crickets for bait, but forget the No. 6 bream hook that most panfish anglers are familiar with. Dennis opts for a bigger No. 2 Aberdeen light-wire hook. 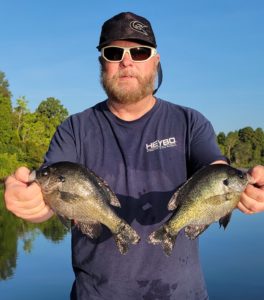 “If you get on the water early — before the sun gets up — you can usually limit out pretty quickly. These fish are patrolling the ledges where the shallow water drops off deep. A lot of folks want to cast right to the banks, but that’s not where the best fish are,” he said.

The proper depth changes depending on the exact spot on the river. But Dennis and his anglers catch plenty in the 8-foot depth range.

“You can see the bottom just gradually sloping. Then all of a sudden, you can’t see it anymore. That’s the ledge that these fish are usually hanging around,” he said.

Dennis (843-245-3762) uses Precision Crappie Rods from Catch the Fever along with 6-pound test Slime Line monofilament. With braided line being all the rage among many anglers, it’s Slime Line’s High Visibility Green mono that gets the job done here.

Bream this size can often straighten out light-wire hooks. But upsizing the hooks will gut and kill the crickets, and offer a very unnatural look to the fish. Dennis said using the rod’s action, and the reel’s drag along with the stretching properties of monofilament, anglers can reel in these fish without fear of broken or straightened hooks, even from bream that weigh more than a pound — and sometimes much bigger.

“That allows you to use these light-wire hooks, which are great when you get hung up in debris or submerged grass. You can usually pull free by putting your hand directly on the line and giving it a steady pull. This allows you to straighten the hook, which the fish can’t do when working against the drag, the rod and the line,” he said.

The line is also, as the name implies, easy to see thanks to its bright color.

To keep his crickets at the proper depth, Dennis uses crappie-sized styrofoam slip floats. With a slip knot set on his line at the desired depth, the cork slides down to the weight when the angler reels in. After a cast, the cork slips back to the knot, allowing the bait to sink to the proper depth. This allows anglers easy casting even when fishing in extremely deep water. And after moving to water that is either deeper or more shallow, the angler just needs to readjust the slip knot.

Bream aren’t the only game in town

This is a tidal river, and Dennis said he prefers to fish on the falling tide.

“You can catch them on the rising tide too, but I just like the falling tide better. Either way, you need to be aware of submerged grass and other debris that’s 3 feet deep one minute, then 18 inches deep before you know it. Or vice-versa. You also have to keep track of where that ledge is. As the water goes up or down, the fish move, constantly staying on that point that drops from shallow to deep,” he said.

These fish will remain on this pattern throughout the summer and late into the fall, he said.

Dennis said it’s very common to see schools of largemouth bass busting the surface while bream fishing here. So he said it’s a good idea to have another rod with a Pop-R or Tiny Torpedo tied on.

Tanner Herndon of Rosinville, S.C. has been drawn as the monthly winner for the August Carolina Sportsman Bag-A-Buck Contest. […]