When August heats Carolina waters to a near-boil, you can count on sheepshead to bite. Here’s how to find and catch them.

Stephen Fields of Charleston Fishing Company might prefer to be on a grass flat casting to redfish. But when the inshore waters in the Carolinas reach their hottest levels this month, one of his most-reliable targets for clients are sheepshead.

Aside from their notorious bait-stealing abilities, sheepshead are more than plentiful in most any location that has sufficient water and fish-holding structure. Fields said 3 to 4 feet at low tide is adequate. It’s even preferable, if the surrounding areas are relatively shallow.

Spooking sheepshead in such close proximity is rarely an issue. But Fields still prefers to stay off the structure as much as possible. He uses the twin Power Poles on his bay boat to position it so he can present baits vertically.

“Some dock owners get upset if you’re tying up to their private docks, but there are plenty of public places — piers, wharves and random pilings — where a person in an old, beat-up skiff can get in under some of the dock structure and work vertical structure,” Fields said.

In more-urbanized areas where anglers have ample structure to choose from, developing an eye for the best areas will save a lot of time eliminating unproductive water. Fields said other than deep holes, the older, more-dilapidated pier structures are typically the best sheepshead-holding locations.

If it holds barnacles, it’s a sheepshead hotspot

“It’s not rocket science,” Fields said. “The older wood supports more oyster shell and barnacles, which in turn host more small crustaceans like shrimp and crabs. So the older stuff makes a better environment for sheepshead.” 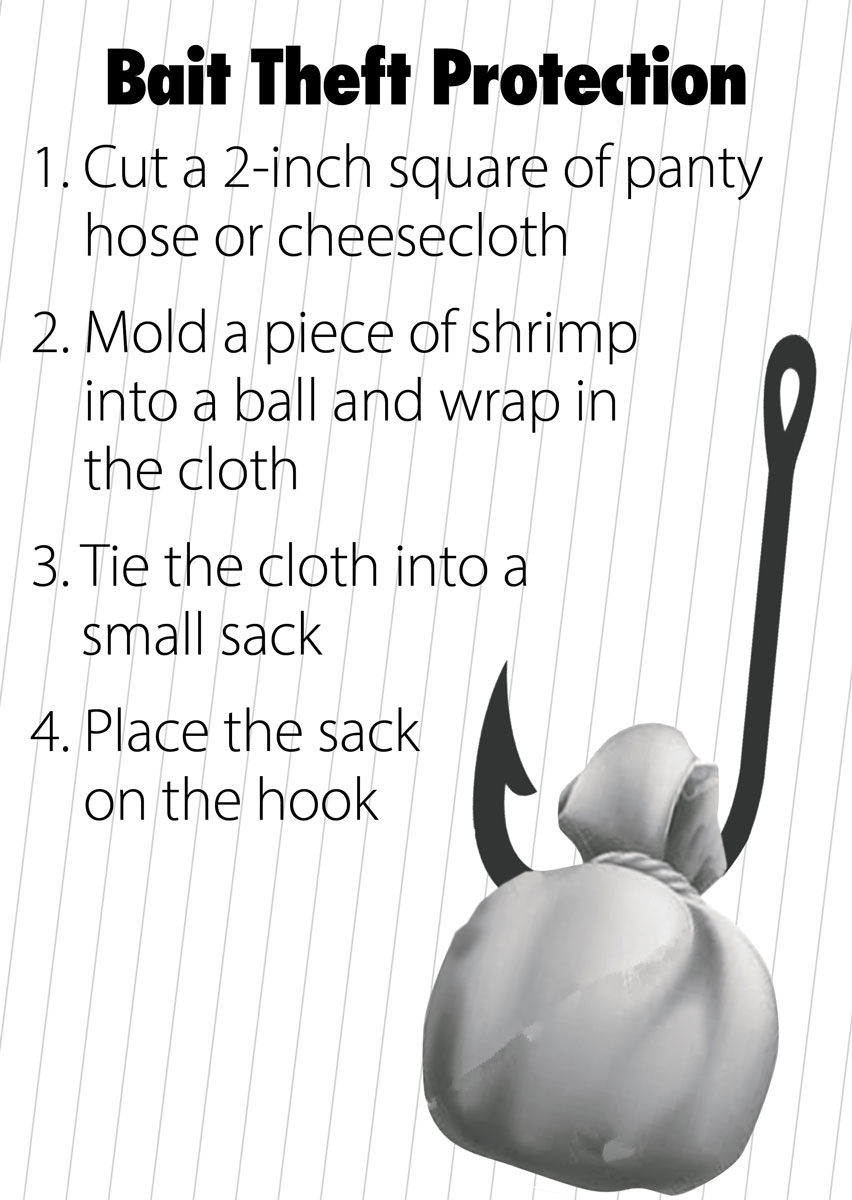 Tackle for sheepies is typically lighter than what inshore anglers may choose for pulling redfish out from under oyster-laden wood. Light action, 10-pound tackle is sufficient. But filling the spool with 20-pound braid is advisable for those occasional full-grown fish that you’ll encounter.

Baits for sheepshead don’t draw much debate. Fiddler crabs are the top choice, mainly because they are available at most bait shops and are easy to care for. The way you hook a fiddler may increase you’re hookup odds, though not by much. Insert the point of the hook into the underside of the shell and barely break the top shell’s surface with the point.

The best way to describe the bite of a sheepshead is a sensation of the leader being twisted between your thumb and forefinger. Any rolling sensation or lack of sensation with the weight should warrant a hookset. Missing a hookset rarely spooks a sheepie, and he’ll be game for another crab if he takes the first one, two or five baits off your hook.

Other baits will also work

On some occasions, demand may result in a lack of the fiddlers at local bait shops. Under these circumstances, live shrimp or pieces of shrimp can be an acceptable substitute. Expect the bait-to-missed-fish ration to go way up when using shrimp.

Fields suggested a trick for using shrimp he learned in Florida. Take an old section of women’s nylon pantyhose or cheesecloth and cut the fabric into roughly 2-inch by 2-inch squares. Mash a piece of shrimp into a ball and wrap it in the square of fabric. Roll the bait into a sack and tie off with line. Now stick the hook through the sack. The sack requires a little more chewing on the fish’s behalf to get to the shrimp. This provides additional time to detect the bite and set the hook.

An often-overlooked bait is a cherry sized clam or small oyster. Using a mallet, crush the shell and work the hook securely into the joint of the bivalve mollusk. Other anglers swear by live barnacles as bait, having scraped them off a piling and managed to secure the chalky mass to a hook long enough to get it down to the fish.

Chumming sheepshead is another old-time, popular tactic, either by scraping barnacles directly off the structure into the water or coming prepared ahead of time with a bucket of crushed clams or oysters and occasionally scattering the debris into the water to attract sheepshead.

The North Carolina DMF is asking anglers to donate their flounder carcasses during the state’s 2021 harvesting season to help with research. […]

Paddle up some September shooting in the Carolinas

About Phillip Gentry 764 Articles
Phillip Gentry of Greenville, S.C., is host of “Upstate Outdoors,” a weekly radio show that can be heard on Saturdays at noon on WORD 106.3 FM.