This dream meal has everything you want!

Most of us have been looking forward to the new year, not necessarily for 2021, but because we’re glad 2020 is over. This is a fun meal that tastes really good, and it will be a great meal on a cold, February day.

This recipe is a gift, in many ways. Robert Cardwell, who has shared several excellent wild turkey recipes, provided it. It has quickly become a favorite.

February is one of the coldest months in the Southeast, when we have potential to see the most winter weather. Still, sportsmen are out doing what they enjoy. Fishing hasn’t gone away, but it has slowed. And much of the crowd is gone from boat ramps and marinas. Deer season has been finished for a month, and duck hunters will be out of the water the day before February starts. A few hunters are traipsing through the woods in search of squirrels and rabbits. And quail hunters follow braces of pointing dogs over the rivers and through the woods.

This recipe works well for this time. It contains multiple ingredients, but most can come from your fridge, freezer and pantry. In fact, that’s what Cardwell credits for this recipe. It was his turn to cook dinner, and he hadn’t prepared. So he went through the freezer, fridge and pantry and found all of the ingredients. Since that first time, it has become a staple, and he has added or changed a few things from the original. And I changed and added more when he shared it with me.

Plain and simple, this casserole is comfort food. It takes a little while to prepare, but it isn’t difficult. Even better, it includes several things we all like. This proves my philosophy that if two ingredients are good, the odds are in your favor they’ll be good together. This doesn’t always work. But when you begin with venison, add sausage and bacon, then mix in cheese, the odds get really high it has to be good.

Sure, my arteries quake and quiver every time I fix this. So I do so sparingly, but at times the ingredients come together and begin calling my name. I believe if you’ll try this, you’ll fix it again. It tastes good, is filling, is warming and brings a smile to your face. Heck, I smile just speaking the name. And that’s about all you can ask from a venison bacon cheeseburger pizza made as a casserole.

Most readers will receive this issue toward the end of January. Hopefully, the New Year began well and is going well. I know we’re all looking forward to 2021 after everything we went through in 2020.

When I was younger, I would have called a pizza with these ingredients a “garbage” pizza. That isn’t actually a bad name, but an endearing name for using everything in the fridge that is about to expire. Robert Cardwell has put that idea together in a casserole. Who would have thought it? That’s why I appreciate so many of his endeavors. The man is creative!

This version is very close to Robert’s original recipe. But regular readers know I had to tweak it a little. You should feel free to do this also. This is excellent as it is, but some folks will prefer more or less spice. I rarely use salt and only use a little Himalayan pink salt with the egg noodles. Your tastes may be different. And that’s OK.

Speaking of the egg noodles; here are two tips that aren’t on the package. First, use a little olive oil in the water when you boil them to help prevent them from sticking together. Second, before stirring them into the mixture, run hot water over them for a minute or two to loosen them back up and make them easier to blend into the mixture.

Use a cast-iron skillet for this casserole

One of the things Cardwell likes about this is that except for needing a pot to boil the egg noodles, it could be cooked in a single, cast-iron skillet. This shouldn’t be changed. Cast iron heats well for both the stove top and oven segments of cooking. Also, don’t clean the skillet between cooking the bacon, browning the meats and sautéing the veggies. Pour out any excess drippings, but realize that with venison and one of the game sausages, there won’t be much except from the bacon. Use those juices to help season the veggies.

The first ingredient to consider is the meat. Bacon is bacon, and it’s good, and that’s all that matters. Venison is the burger, but if you don’t have any, this is still surprisingly good using hamburger. I know that’s a sacrilege, but sometimes you’re out of venison burger.

The recipe calls for sausage, and this generally means purchased pork sausage. That works fine, but it is excellent with feral pig sausage and venison sausage. I expect it would also be good with bear sausage, but I haven’t had any to try. Mild sausage is fine and hot or spicy is better.

Spice it up to your own taste

Cardwell’s recipe called for mixed green and banana peppers. This was another opportunity for me to fine-tune the mixture. I use a jalapeno pepper instead of the green pepper and sauté about a third of it with the onions to be mixed into the casserole. I keep the rest to be sprinkled on top by those who like more jalapeno.

Cardwell’s recipe called for chopped tomatoes. I changed that to Rotel, which is available from mild to spicy and includes chopped green chilies. Even the mild is better than plain tomatoes.

This mix begins with good ingredients and the blend of them is even better. Once you put the cheese on top, it’s almost ready. Finely shredded cheese only requires another minute or two in the oven to melt, while coarsely shredded cheese will take a few more minutes.

I think this is ready to eat when it comes out of the oven. But I’m experimenting with letting it sit for a few minutes before scooping some for the first plate. Some flavorful steam definitely escapes when it is cut immediately. 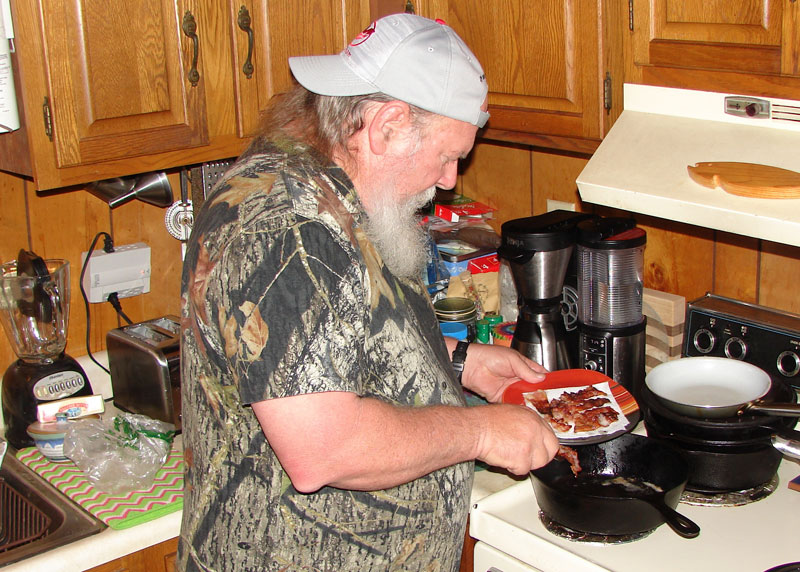 Sauté the onion and about one-third of the jalapeno in the sausage drippings. When the onion begins to turn opaque, add the banana peppers, onions, mushrooms and Rotel to the skillet and sauté lightly for another minute or two. Preheat the oven to 350. Cut the bacon into small pieces, but not as fine as crumbles.

You’ll want a second helping of this casserole!

Remove the skillet from the heat and mix in the venison, sausage, bacon, noodles, pizza sauce and 6 ounces of the cheese. Be sure to blend this well. Put this mixture in the oven and bake for about 15 minutes. Be careful not to singe any exposed egg noodles. Remove from the oven and stir the mixture well. Sprinkle the remaining cheese on top of the mixture.

Return to the oven and bake until the cheese melts. The time will vary from around 2 to 5 minutes according to how thick or thin the cheese was grated. Serve with the remaining jalapeno pieces sprinkled on top.

I like salads and serve this with a green salad or lettuce wedge. A piece of hearty bread helps get the last bit off the plate, and a slice of your favorite pie or some warm bread pudding caps this off just right. Of course, you could eat a second helping and forego dessert.

Bridges are crappie magnets during summer

North Carolina has no detected cases of Chronic Wasting Disease in the state’s whitetail deer herd, which is great news for N.C. hunters, wildlife lovers, and conservationists. […]

About Jerry Dilsaver 1128 Articles
Jerry Dilsaver of Oak Island, N.C., a full-time freelance writer, is a columnist for Carolina Sportsman. He is a former SKA National Champion and USAA Angler of the Year.