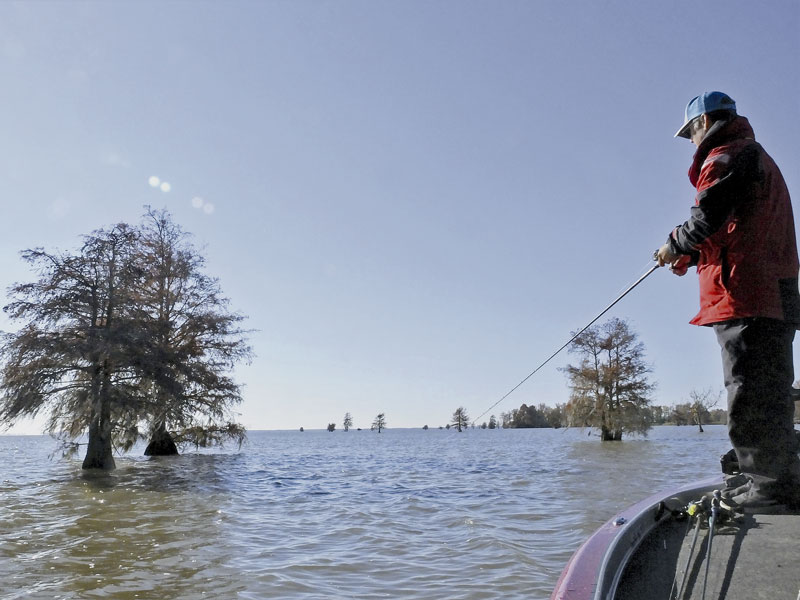 November is big-game season around the Santee Cooper lakes. And while deer are certainly a prime choice for many, the phrase “big game” applies to critters such as enormous catfish, trophy bass and slab crappie.

Traditionally, the deer rut peaks in late October and November, offering a prime opportunity to take big bucks. Sportsmen are taking full advantage by spending productive time in deer stands. But November produces a large number of outlandish-sized fish from a variety of species.

Catfish have been feeding heavily during the warmer months. And now, with cooler weather, the baitfish bunch into larger schools, enabling catfish to chow down on quality forage. The big fish are really on the move this time of the year.

Kevin Davis, the owner of Black’s Camp on the Diversion Canal, said the fishing is outstanding on both Lake Marion and Lake Moultrie, giving anglers options to play the wind and weather to their favor.

“The conditions align with water temperatures, forage availability and aggressive feeding by big catfish enabling more big fish to be hooked,” Davis said. “Target underwater points, humps and drops to focus on really big fish. It’s difficult to leave biting catfish in the 5- to 15-pound class. But if you’re targeting a catfish in the 40- to 80-pound class — or larger — that’s the smart move.”

Davis (843-312-3080) said baitfish are mobile this time of year, and catfish follow the forage. This mobility makes drift-fishing often the best tactic for consistent success.

“I generally like to drift about 0.5 miles per hour, but a little more or less can be ideal. So experiment with speed,” he said. “Bait is another crucial consideration. And this time of year, mullet are available, and big chunks of cut mullet are always a great option. White perch used whole or cut — or just the heads of big perch — are ideal. Gizzard shad and herring are good options. I’d suggest using a variety of baits on multiple rods until you find the daily pattern. And trust me, the patterns can change day-to-day.”

Davis said the best depths may vary from 20 to 50 feet. But typically, big catfish are found in slightly deeper water than the smaller fish.

Bass on the move at Santee Cooper

Another positive aspect of the abundance of fall forage in the lake is the impact on largemouth bass. They are on the move following forage and anglers can target them in multiple ways during November.

Guide Brett Mitchell said one of the keys to his November success at Santee Cooper is versatility in using different lures.

Mitchell (803-379-7029) said fish can be on several different patterns, including busting shad on the surface, holding near trees, stumps and logs to ambush forage and patrolling the edge lines of weed beds looking for prey.

“My advice would be to have an assortment of lures rigged and ready, and then search for the pattern for that specific day,” he said. “Weather plays an important role in November, for sure. And although it may be more stable than what we had during the spring, the bass are prone to change patterns. And we’ve got to adapt as they do.”

On a past November fishing trip with Mitchell, his lure options included spinnerbaits, topwater frogs, plastic worms and crankbaits as well as topwater lures that he could cast long distances for the occasional fish schooling on the surface.

“The potential to catch a trophy bass is real, coupled with catching numerous bass. So it’s an ideal time to target big bass on either lake,” Mitchell said.

November brings the best potential to hook super-slab crappie since the spring  spawn. And when discussing super slabs, the potential to catch fish approaching the 3-pound class is possible.

The November pattern typically finds crappie locked onto brush piles in open water in depths ranging from 20 to 35 feet.

The best tactic is to use your graph to find sunken brush in either Marion or Moultrie. The many recently refurbished public fish attractors are excellent areas to catch crappies. They are marked by buoys with coordinates on the SCDNR website at www.dnr.sc.gov.

Use either live minnows, small jigs or a jig-minnow combo on a tight-line rig. Fish the rig vertically over the brush and around the edges. If the bite is slow, work into the brush. But this time of year, the bite is often aggressive.

If you don’t get action quickly, or if the fish are smallish, move until you find the slabs you’re targeting.

Nine-year-old Colby Beamon of Stokes County, N.C. loves to catch catfish. The young angler loves the fight of a catfish on the line. […]

“In Moore County NC, we’re experiencing a drought. Maneuvering a kayak can be tricky since obstacles once submerged are now a concern for getting high-centered while topwater baits are getting hung up. But….the trophy bass […]

July is productive for multiple species of fish on the Santee Cooper lakes, Marion and Moultrie, for anglers with the right game plan. […]

About Terry Madewell 718 Articles
Award-winning writer and photographer Terry Madewell of Ridgeway, S.C., has been an outdoors writer for more than 30 years. He has a degree in wildlife and fisheries management and has a long career as a professional wildlife biologist/natural resources manager.