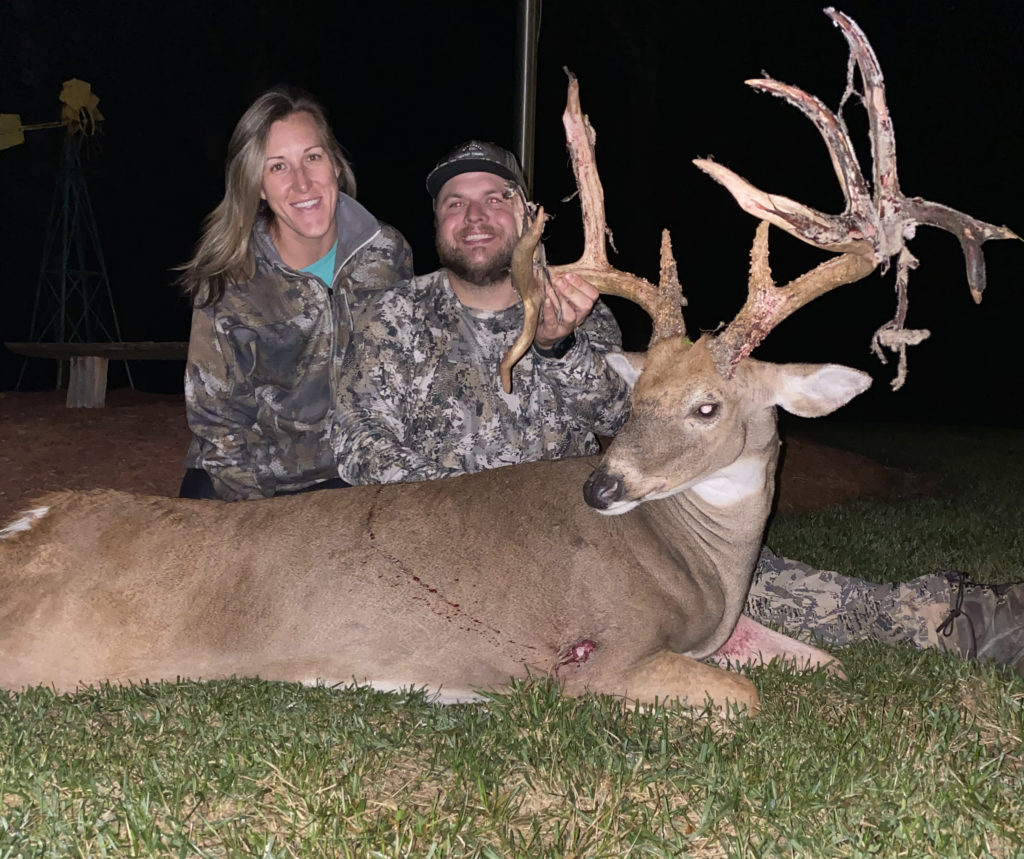 Winter rabbit hunt put Thomas in touch with his trophy

A rabbit hunt with his father last winter produced the biggest buck of Wesley Thomas’ life in late September of this year.

Thomas, who lives in Hillsborough, N.C., usually deer hunts on a lease in Alamance County. He killed a 146-inch buck there in 2019. But last winter found him following beagles on hunt-club land in Person County, land where he normally hunts only turkeys.

But when hunters were finishing up in one area, Thomas’ father, Don Thomas, showed up tuckered out. He said he’d found a huge shed antler from a whitetail buck. But it was so heavy, he got tired from carrying it and hung it in a pine tree on his walk back to the trucks.

Thomas put all of his efforts from March through September into the big Person County buck. Early on the evening of Sept. 22, he dropped the huge trophy with one Easton Magnum bolt, tipped with a QAD Exodus broadhead, from his Ten Point Wicked Ridge crossbow.

His trail cam captured the buck on photo during the spring

The buck was even bigger than it was in 2019, carrying a main-frame 8-point rack with a drop tine on its right antler and a long, split non-typical point jutting from the left antler. Thomas, who has rough-scored plenty of big bucks, said the deer scored 169 5/8 inches, gross non-typical.

“I put trail cameras up in March and I put out a couple of buckets of minerals,” Thomas said. “At the end of May, I pulled my cameras. And about the fourth photo I looked at was a big buck just growing his bases. And they were the size of Coke cans. I knew it was this deer.

“I started putting out corn, and I watched him grow from the end of May through June. In July, I could see when he started growing the drop tine.”

Thomas had four trail cameras out around a thick acre or so of 20-year-old pine trees where he figured the buck was bedding. He was trying to figure out where the buck went every day and when, including a bean field about 300 yards away.

There was just one problem. Thomas had the deer pegged working its way through a cutover, and there were no trees big enough to hang a stand in. So on July 11, he loaded up his ATV with lumber and plywood and got as close as he could get, then carried the wood in the last 200 yards and built a 4x4x8 box blind 6 feet above the ground.

“I painted it and brushed it up. I built it right in this deer’s bedroom. I figured he was bedding 150 to 175 yards away in that pine thicket,” he said. “After I built it, he was gone for eight or nine days, then he came back. He came in every day between 7 and 8 at night. Then he disappeared about two weeks before the season opened. He came back on Friday night before the season opened (Sept. 11) at 11 p.m.”

Thomas knew the only perfect wind to hunt was from the west. He hunted the stand as much as he could after the Sept. 12 archery opener, but he never got a true west wind and never saw the buck.

On Sunday, Sept. 20, he took his girlfriend, Kirsten Kelly, to his Alamance County lease to try to get her a deer because the wind was from the northwest at 12 mph, with heavier gusts. So he knew he shouldn’t hunt his Person County box blind. But at 7:27, his cell-phone vibrated as a trail camera delivered a photo of the buck, in front of his blind.

“I pulled up the weather (app) on my phone, and it said that the wind would blow from the west on Tuesday. I told Kirsten that I’d kill him on Tuesday. I think every day I had been in the woods before, on mostly northeast or northwest winds, I think that deer smelled me and didn’t come in.”

Crossbow does the trick on the Person County buck

Thomas was in his box blind around 4:30 on Tuesday, Sept. 22. At about 6:40, a cowhorn and spike buck came into his corn, followed by a doe and a fawn. At about 7:35, Thomas said they “started acting real weird, got tense, and looked over their left shoulders back toward the small pine thicket.

“I knew that buck was coming.”

At 7:38, the buck was suddenly standing in the open at 26 yards, facing him. “I could have killed him easy with a rifle,” said Thomas, who was hunting with a crossbow instead of the compound bow with which he has shot plenty of deer — because of the shot he knew would be required.

“There were strips of velvet hanging off his rack. It looked like Spanish moss hanging from a tree,” Thomas said. “Finally, he turned broadside. I put it on his shoulder and pulled the trigger. I heard the ‘thump’ when it hit him, and he kicked up his back legs and took off. I heard him running through the brush, then I waited and didn’t hear anything, didn’t hear him fall. Then, I stuck my head back out the window to hear better, and I heard him crash to the ground. I knew it was him.”

Thomas texted his father, brother and girlfriend to tell them he’d dropped the big buck. Then he called his hunting buddies, Patrick Bynum and Cale Rogers, asking them to come help him bring out the buck.

Person County buck had a 19 6/8-inch inside spread

Bynum had killed a 142-inch buck on the same Person County property on Sept. 18, and Barber had killed a 155-inch buck in Alamance County the same night. They arrived and got to drag Thomas’ even-bigger buck out of the woods.

“I waited an hour and 20 minutes before I got down. I went over and picked up my arrow, which was completely covered in blood, sticking out of the ground — a clean pass-through,” he said. “I walked about 10 yards and found some good, frothy lung blood. When they got there, we went down to that spot, and he was only 40 yards from there. He’d gone 60 yards and made a half-circle. There he was, with his rack all wrapped up in the briars.

With good reason. The 178-pound Person County buck carried an immense 8-point main-frame rack with a 19 6/8-inch inside spread and beams measuring 25 and 26 inches, tines measuring 12 5/8 and 12 7/8 inches, a drop tine on the right beam that was 7 6/8 inches long and a forked, non-typical point sticking horizontally off the tallest tine on its left antler that was 9 3/8 inches long.

“The only thing he didn’t keep from last year was a split brow tine that the shed my dad found had,” said Thomas, whose girlfriend noticed that the buck had one front foot and hoof swollen to about twice the normal size from an old injury — a possible explanation for the non-typical points. It also had what Thomas called a “big, sore spot” on its chest, full of puss. It was “bigger than a golf ball but smaller than a tennis ball.

“I’ve never had a deer stay in velvet more than a week after the season opened. I wondered if its hoof or the sore spot on its chest were why he didn’t shed his velvet any earlier.”

Congratulations to Thomas, who is now entered in our Bag-A-Buck contest, making him eligible for a number of great prizes, including the grand prize which includes a 2-day, two-man hunt at Cherokee Run Hunting Lodge. Click here to view the Bag-A-Buck gallery or to enter the contest yourself.

About Dan Kibler 846 Articles
Dan Kibler is managing editor of Carolina Sportsman Magazine. If every fish were a redfish and every big-game animal a wild turkey, he wouldn’t ever complain. His writing and photography skills have earned him numerous awards throughout his career.