When South Carolina’s deer hunters take to the woods in many parts of the state this month, they shouldn’t expect to see a lot more or a lot fewer whitetails.

But according to Charles Ruth, the deer project leader for the S.C. Department of Natural Resources, they should enjoy things as they are.

“If you look at the deer harvest over the past five or six years, the good ol’ days are right now,” Ruth said. “I think we’re in a much better position with our deer numbers. We didn’t need what we had 20 years ago.

“We went through a period of time after the turn of the century when we had about 15 years of steady decline (in harvest). And harvest is a function of population,” he said. “Now, we’ve reached a little more stability. And give hunters a lot of credit. They understood that you can’t have a lot of deer and good deer at the same time.”

Ruth expects South Carolina’s harvest this fall, barring some unexpected, far-reaching weather event, to be somewhere in the neighborhood of the 193,073 deer reported in the 2019 season. That was a decrease of only 1% over 2018’s harvest. And those kinds of numbers make Ruth feel very good about the statewide deer herd.

“Last year’s harvest was eerily similar to the year before,” Ruth said. “I think, overall, we’ve seen somewhat of an uptick since the new regulations (tagging and bag limit) went into effect in 2017. Most of that uptick has been on the antlerless side than the antlered side. And I’d like to think that’s showing that the limits and tagging have been having the desired effect, taking pressure off bucks.

“It looks a lot like cause-and-effect. Even though the population and harvest is off 30% to 40% from the record, we’re in a much better place.” 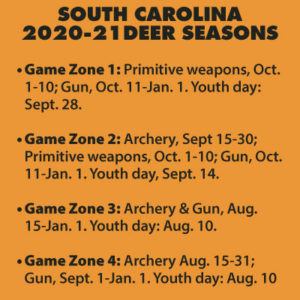 Ruth said that record harvests topped out in 2002, a time when he said South Carolina had far too many deer — and not too many big ones. Then, the population and harvest numbers, for whatever reason, started on its downward trend.

“We went through a period from about 2008 through 2013 when a lot of hunters were talking about not seeing as many deer as they were used to seeing. But we’re not hearing that anymore. Hunters wanted to sacrifice quantity for quality.”

One of 800 bucks will make state record book

South Carolina’s all-time deer record book entries point way back in the 1980s and 1990s for the best years, percentage-wise, for taking big bucks that qualified with a Boone & Crockett Club score of at least 125 (typical). Ruth said the state is heading back in that direction.

“We have been getting more record-book entries that are making the list annually,” he said. “If you compare the entries with the number of bucks killed, one out of about every 800 bucks killed is making the list. And that’s as good as it’s been.”

Ruth said the changes in herd size and harvest numbers have been more or less statewide, with very few localized or regional differences.

“The past few years, we’ve had some concerns about a harvest drop-off in some of our coastal counties. But we think some of that is relative to access — properties being flooded where there was no hunting. But it’s very short-term.”

Ruth said that the number of coyotes being killed in South Carolina has decreased along with the deer population after a high point in 2014. The coyote harvest fell 9% last year from 2018 levels and is 34% lower than five years prior.

“What I tell people about deer and turkey, you can throw coyote in there,” he said. “If you look at the harvest of coyotes and deer, there is a direct correlation. When deer and turkeys increase, coyotes increase. Maybe part of the uptick in the number of deer harvest is because there are fewer coyotes out there.

For redfish in the peak of summer’s heat, smoke ‘em in the grass. […]

WMA hunting on Sundays being discussed by SCDNR

The SCNDR would like to know your opinion of WMA hunting on Sunday in South Carolina. Attend a meeting or take the survey online. […]

Plan ahead for archery season, based on equipment shortages

COVID-19 is still impacting the outdoor world, with equipment shortages. Don’t wait until the last minute to get ready for archery season. […]

About Dan Kibler 860 Articles
Dan Kibler is managing editor of Carolina Sportsman Magazine. If every fish were a redfish and every big-game animal a wild turkey, he wouldn’t ever complain. His writing and photography skills have earned him numerous awards throughout his career.