Paddle boats can get you close to waterfowl

Duck season returns across the Carolinas this month. And just because a little nip is in the air (hopefully), that’s no reason to put away your paddle boat. Kayaks, canoes or pirogues — for our brethren with LSU stickers in the back windows of their trucks — are often some of the most-over-looked modes of not just transportation for duck hunters, but all-terrain vehicles.

It is definitely possible to hunt from a paddle boat. Having no motorized propulsion makes shooting from the boat legal, even while moving. And with the available accessories of cart wheels, attachable blinds and layout seats, a paddle craft has tons of usage both before, during and after the hunt.

Probably the most-common use of a kayak or canoe during duck season is to float slow-moving rivers or streams and jump-shoot puddle ducks and geese as hunters encounter them along the way.

The best float-hunting waters will be small enough that ducks winging up or down the waterway will be within range of a floating hunter. Wider rivers and creeks may not have enough water flow to keep the floater moving downstream.

Streams also should have easily accessible “put-in” and “take-out” locations. A stretch of curvy water between bridges makes for an ideal float trip.

Many manufacturers offer kayaks in camo patterns that also have available deck and gunwale areas to which hunters can attach a small blind. But if this doesn’t suit your needs or boats, You Tube and the internet are chock full of articles and video how-tos to help you turn your kayak into a duck-hunting machine for as little as $40 in do-it-yourself materials available from the local hardware or sporting goods store.

Ever since the first Eskimo discovered that flocks of fat-bellied ducks loved to gather up way out in the middle of a body of water, man has been trying to figure out how to conceal himself well enough to get out there and shoot the little buggers. 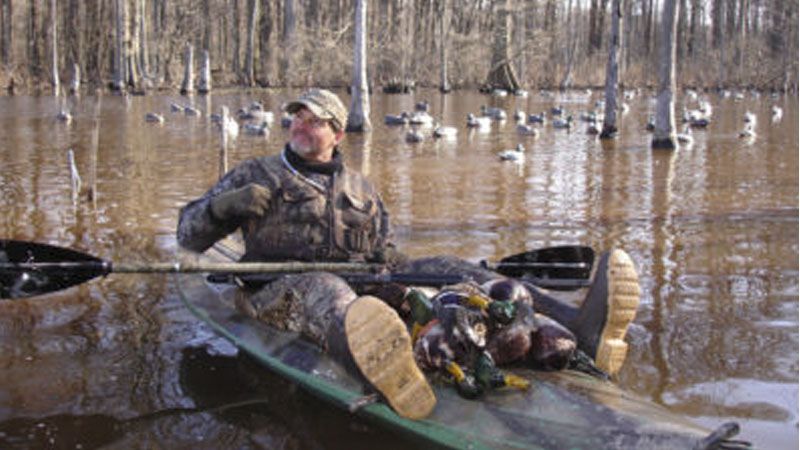 When hunting diving ducks on big water, kayaks make a perfect, low-profile vehicle that can be staked out by a mother ship or even paddled out into big waters. A drab piece of water-colored tarp or cover-up blends the boat in perfectly with a section of flat, open water and a large block of diving ducks or even sea ducks. In some states, the latter have to be hunted a minimum of one mile from the shoreline.

Think about one of the most-common duck holes that a majority of the duck hunters in both North Carolina and South Carolina hunt during waterfowl season. It’s that lowland swamp on the back side of the deer club or that beaver swamp down off the river on Great Grandma’s property.

In both of these situations, a truck or four-wheeler can only get you so far. And that is usually down to the wood line before the land gradually turns to water. Another situation is that tributary creek that flows into a public body of water. In either situation, only inches of water separate you from a sticky bog that wants to suck your waders off.

You can transport yourself, a dozen or so decoys, plenty of gear and even ol’ Fido by loading a kayak in the back of the pick-up and dragging it across the bog until it gets thick, and then paddle the boat into position. Once set, the aforementioned attachable blind or other camouflage will allow you to sit right in the middle of the swamp and take ’em when they come in with their feet out.

These craft come in handy for many duck hunting situations

One final, but certainly not last, use of a paddle craft during the days of sleepless nights and early mornings known as duck season is as a tender for your permanent duck blind. In many impoundments all across the southeast, large, immovable or semi-immovable duck blinds have been built out in the middle of water that’s too deep to wade very far in any direction. That is one reason each end of the blind has a convenient ramp for Fido to take up his post and retrieve the ducks when the master skillfully takes the air out of one.

However, as good as the dogs are out there, one has yet to be trained to re-arrange your decoys spread when it isn’t producing, or worse, when the Herters or Cabelas label on a decoy is pointing skyward after Fido’s last retrieve.

Waterfowl impoundment owners and managers invest thousands of dollars in designing, creating, planting and maintaining duck blinds that come complete with a below-deck kitchen and even cot room. The best one’s will have a 10-, 12- or 14-foot paddle boat secured to the back for use as a tender, both to make quick runs out to the decoy spread to straighten things up or to retrieve that one or two ducks that fell out of Fido’s range — or maybe even substitute for Fido on his day off.

Sign Up Now
About Phillip Gentry 772 Articles
Phillip Gentry of Greenville, S.C., is host of “Upstate Outdoors,” a weekly radio show that can be heard on Saturdays at noon on WORD 106.3 FM.