I have focused on the journey and the process of bow hunting in this column this year. Part of that journey for me has been the realization that hunting from elevated tree stands is inherently dangerous, if proper safety precautions aren’t followed.

After more than 30 years in the hunting industry, I’ve had many friends and acquaintances who have fallen and become severely injured. And even more who have had close calls. I’ve even had a few close calls myself.

With age comes wisdom (hopefully). And there’s nothing like getting older to make you feel less invincible. Fortunately, today’s technology has led to both much safer tree stands, as well as better fall-restraint systems. We no longer have a valid reason not to have these safeguards in place when leaving the ground to bow hunt.

Most of the folks I know who have fallen from their stands have had slow and painful recovery periods. A few have resulted in paralysis or even death.

I’d like to focus on one particular incident that happened last year however, to someone very close to me. It was mid-October, and Ray was bow hunting for deer just north of Natchez, MS. He had finished his morning hunt around 10 a.m. and was frustrated for most of the hunt by a muscadine vine that was growing across his main shooting lane. It was just out of reach of his stand.

Ray unclipped his safety harness and climbed down from the stand’s 12-foot height. Realizing he left his pack in the stand, he figured he would deal with the vine once back in it. Before climbing back up, he cut off a long piece of the tag end of one of the straps on the ladder.

“Once I got up there (just below the stand), I tied the strap around the vine so I could pull it closer and cut it,” he said. “I was holding onto the ladder and pulling on the strap with one hand, and holding the cutters in my other hand.

“The only problem was I still couldn’t cut it. So I leaned out and let the strap hold my weight instead of the ladder. I even said to myself that if the strap breaks, I’m screwed. Well, it broke and I fell.”

Surprised at how quickly he fell, Ray was lying on the ground in an instant. Luckily, he had his cell phone in the top pocket of his vest. He could not have climbed back up the stand where the rest of his gear was. So it can’t be overstated just how lucky he was.

He called other members of his hunting club. They quickly rushed to his aid. After a nearly hour-long ordeal that included an agonizing, bumpy ATV ride, Ray reached the Natchez Trace. A helicopter airlifted him to UMC Hospital in Jackson, MS. He was diagnosed with a broken humerus, five broken ribs, and a $52,000 bill — just for the helicopter ride.

He didn’t require surgery, but he had a painful 4-month recovery period. His bow season was over almost before it began.

Could have been worse

“This easily could have been way worse. I’m lucky I wasn’t any higher up, and that I wasn’t paralyzed or killed instantly. A lifeline safety system and lineman’s belt could have easily prevented this from happening,” he said.

As we take to the woods, extra safety measures can avoid a season-ending injury or worse. The new “Life-line” systems allow a hunter to clip in their safety harness on the ground and stay attached the entire time they are elevated.

A linesman’s belt or rope allows the safe use of both hands while hanging tree stands and trimming branches. We have no excuse for not taking advantage of these safety measures. If you don’t do it for yourself, think of your loved ones and how much they care about you. Be safe out there and good luck. 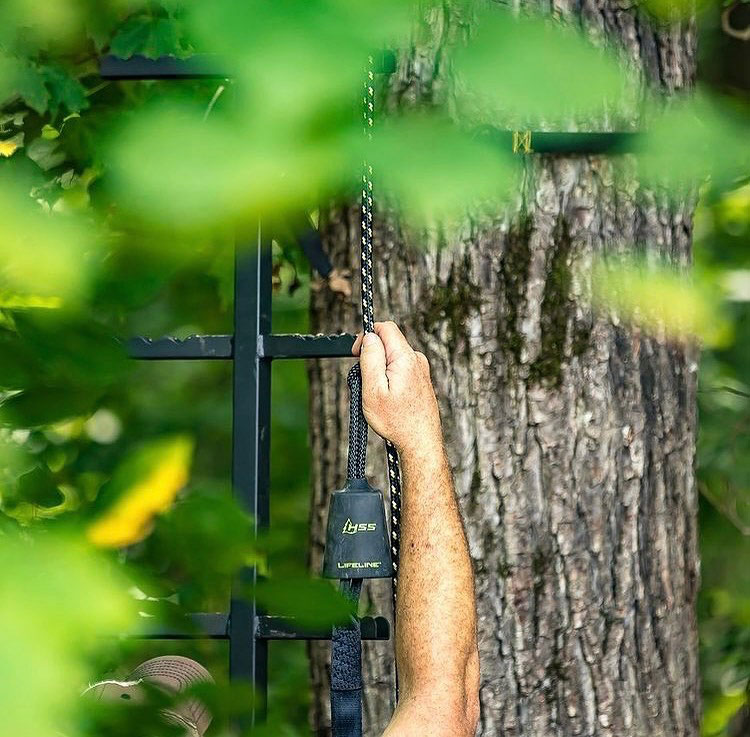 If you’re climbing a tree, or any elevated platform, it’s common sense to clip yourself in as safely as possible. And that’s true, not just while you’re in the stand, but also on your way up.

Kaeden Pegues, age 11, harvested his first deer on the morning of his first youth hunt experience 2022. […]

This small game rifle feels right, is deadly accurate, looks sharp, and is full of features. […]

Hog hunting continues to grow in popularity. This videos shows a contrast between small caliber and big bore rifles for hunting hogs. […]

About Sammy Romano 53 Articles
Sammy Romano is a lifelong hunter who has worked in the archery industry for more than 24 years. His expertise includes compounds and crossbows. He can be reached at samboka31@aol.com.