For the past 3+ months in at least parts of the Carolinas, hunters have had ample opportunities to kill a deer and fill up their freezers with venison. Our deer hunting seasons encompass parts of summer, fall and winter. That’s an incredible amount of time to sit in a deer stand. As December rolls in, some deer hunters are still trying to outsmart their four-legged nemesis. The kryptonite that will lead to a deer’s downfall this month is their stomach and the urge to feed.

Deer eat every day, but when it gets cold and the mating season is winding down, food sources come at a premium. And this month, few remaining natural food sources are available to scratch that itch for deprived bucks and does.

Without the aid of agriculture crops or the hard work of hunters to provide food, deer must rely on winter browse all winter long, unless some remaining acorns remain buried under leaves or other littler along the soil surface.

This time of year, deer will often eat leaves, buds, twigs or anything else they can find with a calorie. Such winter browse is low in protein, carbohydrates, and leaves deer low in energy. So if any foods rich in protein and carbs are available, deer will quickly gravitate to it.

The Carolinas still have plenty of farmland, with numerous farms existing in every county of both states. And luckily for deer and other wildlife, some soybeans remain, but fields of winter wheat are typically newly-planted by December, and are thriving. Deer will hammer these green fields this month throughout the day and night.

Where clover and alfalfa are planted, deer will eagerly browse on these perennial, protein-packed options as well.

For hunters and land managers that have invested time and money in food plots, this month is when they will become especially fruitful, especially when brassicas, clover, rye, oats or other winter varieties are established.

White clover is a perennial variety, and is typically planted in the fall. It can be maintained throughout the year, and the second and third seasons of clover can be especially productive in terms of attracting wildlife. It thrives in winter and can be a real hotspot for deer in the late season. It’s one of the most favored winter crops available. So it is an excellent option for establishing in food plots with a pH near 7.0.

Cereal grains are mass produced all over the Carolinas, and do a great job attracting wildlife. They will not be ignored, especially when young and tender. Deer will browse in newly-planted and well-established fields of wheat, rye and oats. They provide a solid and nutritious food source for deer and other wildlife in the wintertime.

Brassicas such as turnip, rape and radish are other wintertime favorites. While brassicas aren’t necessarily winter varieties, they become hotspots in December when cold and frosty weather becomes a regular occurrence. It’s not until December that the foliage on brassica varieties becomes palatable. And it’s also when those root vegetables produced from these brassica varieties become super tasty.

The deer will soon find these crops and destroy every one of these plants in a hurry. But it can surely be a hunter’s hotspot in the late season. They aren’t especially productive in the early season, but when December comes, hunters will be glad they planted them months ago.

With the long mating season finally over, and deer hungry and looking to fatten up to make it through winter, solid food sources are critical. Food that is rich in energy is not only desired, but a critical item for survival. And for deer hunters waiting to tag one final trophy of the year, the nearest food source is the only place to be. 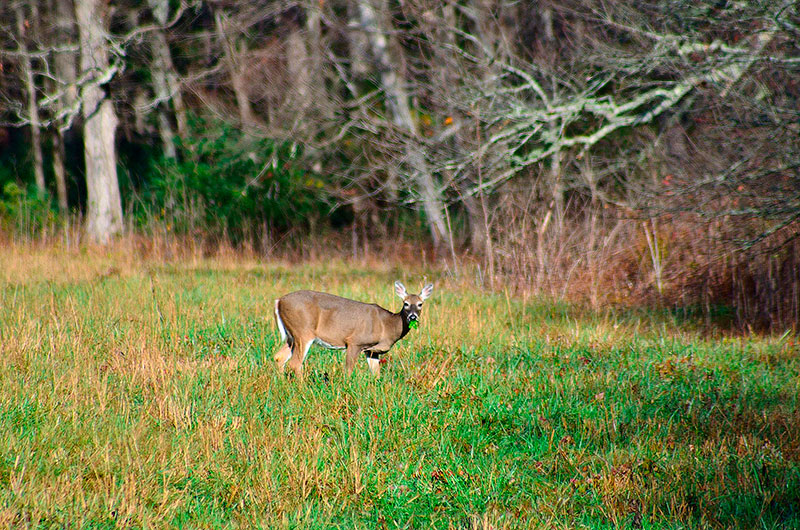 Even if you’re not looking for a late-season trophy, but would rather just fill the freezer, you’ll find plenty of does chowing down on whatever available food plots they can find this month.

Bull drum on the Crystal Coast

Keep your hands toasty and your electronics charged with THAW’s handwarmers. […]

The peak of the deer rut occurs in November, giving hunters more chances at killing a buck looking for love. […]

About Jeff Burleson 1292 Articles
Jeff Burleson is a native of Lumberton, N.C., who lives in Myrtle Beach, S.C. He graduated from N.C. State University with a degree in fisheries and wildlife sciences and is a certified biologist and professional forester for Southern Palmetto Environmental Consulting.