12-point buck was in full velvet

Megan Roland of Little Mountain, S.C. killed her biggest deer yet during a Calhoun County hunt on Aug. 17. And she did it from the stand everyone told her not to sit in.

Roland was hunting with her husband and a group of others, and when they all parted ways to go to different stands, she felt the urge to sit in one she’d never even seen.

“I’d never been to that stand, but something just kept telling me to go there. Everyone was saying it’s a terrible stand, and that it’s the most uncomfortable one on the property. But I just felt strongly about it. So that’s where I went,” she said. 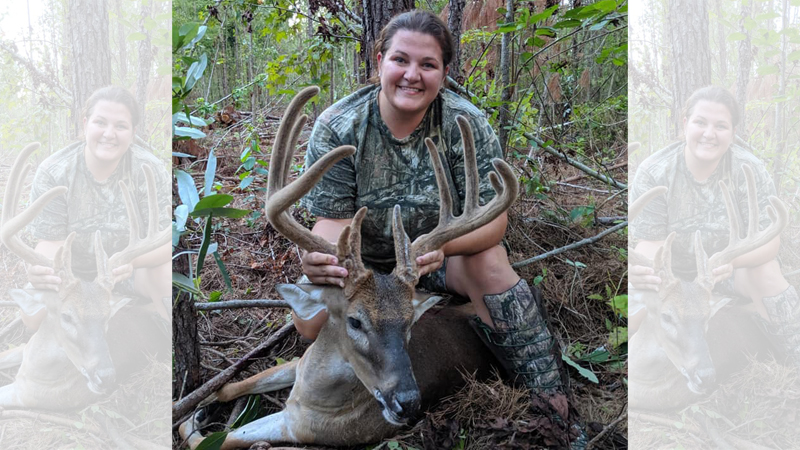 It was a long walk to the stand, and once she arrived, she climbed the old tripod, texted her husband, and promptly dropped her phone out of her lap and onto the ground under the stand.

“I climbed down to get it and while I was out of the stand, I decided to kick my boots off and leave them there. Everyone was right about the stand being uncomfortable. It’s really cramped and my boots made it feel crowded. So I left them at the bottom of the stand and climbed back into the tripod,” she said.

Her instinct to sit in this stand proved correct

Once back in the stand, she texted her husband one more time, then slipped her phone into her pocket. It was 7:02 p.m. When she looked up, the buck was standing about 35 yards away.

Roland aimed her .25-06 rifle and pulled the trigger. The 100-grain bullet found its mark. The deer tried to run, but stumbled into a tree about 30 yards away.

“I saw him fall, and I kept looking at him, making sure he didn’t get up,” she said.

Roland FaceTimed her husband to tell him the news, and he was just as excited as she was.

“He was so happy for me and just telling me how awesome it was. He told me he was climbing down out of his stand to come see it with me. I told him to stay because I didn’t want to mess up his hunt. But he said that no, this was more special. We’ve been hunting together for about eight years, and this is my biggest deer yet. I FaceTimed my dad too, and he was on vacation. He’s the one that I started hunting with, so I wanted to share the moment with him too.

Deer in velvet aren’t eligible for the state record book, but Roland said that doesn’t bother her at all.

“I’ve worked really hard and spent a lot of time trying to get a mature buck. It finally paid off, and it was really special to be able to share the moment with my husband. I couldn’t be happier!” she said.

Click here to read about the Aiken County hunter that killed two great bucks in the first three days of the season.

Sign Up Now
About Brian Cope 1598 Articles
Brian Cope is the editor of CarolinaSportsman.com. He has won numerous awards for his writing, photography, and videography. He is a retired Air Force combat communications technician, and has a B.A. in English Literature from the University of South Carolina. He can be reached at brianc@sportsmannetwork.com.
Website