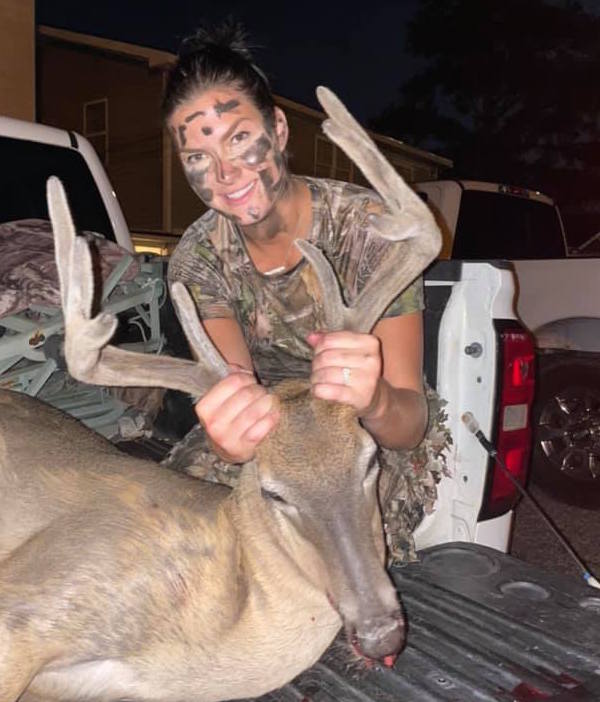 8-point buck was in full velvet

During an Aug. 20 afternoon hunt she’ll never forget, Phoebe Marie Britt of Socastee, S.C. killed a trophy Horry County 8-point buck. It’s her biggest buck, and the first one she’s killed from a climbing stand. She shot the buck with a TenPoint Crossbow from 30 yards away.

The 8-point buck was a frequent star on her husband’s trail cameras. They had 2 years worth of photos of the deer, and decided this was the year to harvest it. And Britt got a sneak peek at the deer a couple of days before she shot it. It showed up 100 yards away on the edge of the woods, out of crossbow range.

Britt was sitting in her stand overlooking a pine thicket when she saw the deer for the second time. It was a hot day, but she wasn’t going to let that stop her from hunting the 8-point buck.

“The heat index was in the 100s. But I was determined to hunt this buck. After a few hours with the heat, I could finally see the sun starting to drop behind the trees. It was 7:30 p.m. and I knew it was go time. I knew the deer should start moving at any moment,” she said.

And right on cue, deer did start moving. A couple of does showed up first, but as they headed for the corn pile, something scared them away.

“They got spooked and ran off into the woods. My heart dropped. I knew it was one of two things: the deer could smell I was there and my cover was busted, or there was a buck coming that ran the does off,” she said.

Almost immediately, she got her answer, and it was the one she was hoping for.

“Out came two bucks. A little basket rack 6-point, and the big 8-point grouped together. They strutted confidently straight to the corn pile. I knew then that they had no idea I was there. I had succeeded in my preparations for the hunt. As the two bucks approached the corn, I took some deep, calming breaths to steady my heart rate and hands. Then I raised the crossbow and aimed for the big 8-point,” she said.

A second later, she heard the “thump” as her crossbow bolt met the 8-point buck.

“I hit him! Relief and excitement ran through me at once. He was still in velvet and it was my first kill out of a climber. I successfully harvested the biggest buck I had ever shot, and I could get out of the heat!” she said.

After texting her husband the good news, he and their son arrived to celebrate the hunt and to help load the trophy buck into the truck.

“We tagged the buck and got it to 707 Deer Processing. It was an unforgettable hunt,” she said.

Britt is now entered in our Bag-A-Buck contest. Click here to enter your buck in the Carolina Sportsman Bag-A-Buck contest. We’re giving away some great monthly prizes, as well as a Grand Prize that includes a Millennium M25 hang-on deer stand and a 2-man, 2-day hunt for deer and hogs at Cherokee Run Hunting Lodge in Chesterfield, S.C.

Garrett Collins of Ruffin, N.C. killed a Rockingham County beast of a buck on Sept. 11, 2022 during an evening hunt. […]

David Lambert of Clinton, N.C. killed an Orange County trophy buck on Sept. 10, 2022 during an evening hunt with his Diamond compound bow. […]