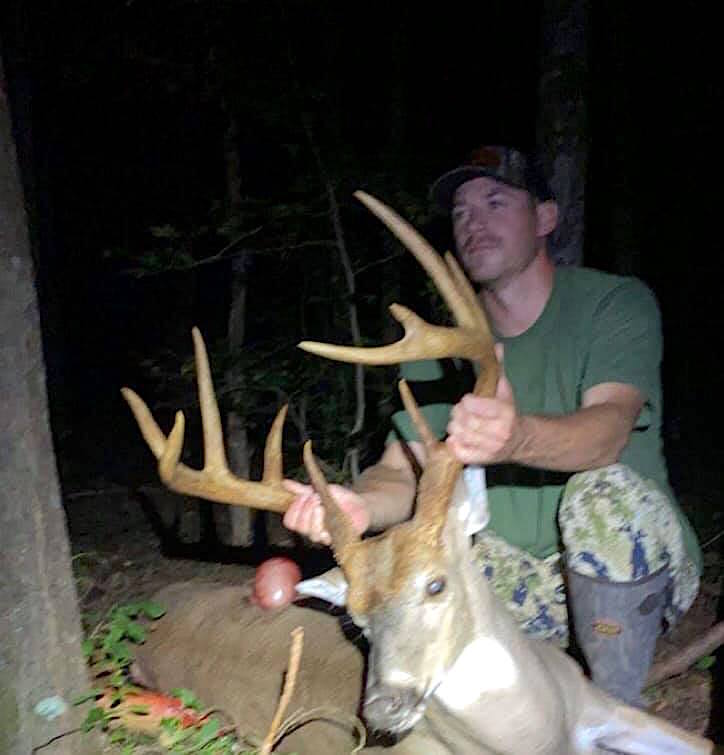 Michael Collins killed a Franklin County 10-point brute of a buck on Sept 12, North Carolina’s opening day of archery season. It was a buck he’d been keeping tabs on for quite some time through trail camera photos. And his dad even missed the buck twice last year.

“In 2019, I had a ton of nighttime trail cam photos of a big 9-point buck. He was completely nocturnal during the season until Nov. 18. And my dad missed him twice with the rifle. We never saw the buck again in daylight during 2019,” said Collins.

But as 2020 rolled on, the buck began showing up on Collins’ Spartan Trail Camera in March. And the deer had grown even bigger.

“I could immediately tell he was much bigger. He grew another point, making him a 10. And he had much more mass. Leading up to the opening day of bow season, I fed him 200 pounds of Big Tine once a week. I noticed that every day I put the bait out, he would show up a few hours later in daylight with a button buck,” he said.

The plan was working, so the hunter continued with the same steps as opening day drew closer.

“I continued feeding and waiting. Finally, opening day arrived, and I had my plan. At 3:30 p.m., I pulled up to the farm, grabbed my camera and bow. I threw a bag of Big Tine over my shoulder and walked to the stand. I poured out the Big Tine, then quickly eased up into my stand to wait,” he said.

The plan worked. Before long, the button buck showed up in the flesh just like he had been doing on camera, heading to the deer attractant. Collins was sure the 10-pointer was close behind

“Around 6 p.m., I heard something coming. A button buck walked through my shooting lane. I knew from my previous trail camera pictures that the 10-pointer was coming. Seconds later, he stuck his nose in the lane and froze. He knew something wasn’t right. He backed up,” he said.

Collins realized this was a smart buck, and it wasn’t going to offer him an easy shot. But he stayed ready, hoping the buck would make a fatal mistake.

“He circled to my left to go down wind, turned, and faced me, offering me no shot at 25 yards. He stood there for what felt like 10 minutes before finally deciding he’d had enough. He began to turn around to head back where he had come from, and I knew I had to take my shot,” he said.

Collins is now in our Bag-A-Buck contest

As the buck turned around, the hunter saw his chance.

“I sent my arrow. It sounded like I hit him, but I couldn’t really tell what happened until I reviewed my camera footage. My arrow had bounced off of a tree before hitting him. Around 6:45, I climbed down, checked my arrow, and decided to wait a few hours. At 9:30 p.m., I rounded up a few buddies and we started the blood trail, finding the buck 300 yards from where he was shot,” he said.

The buck’s antlers carried its mass throughout, helping to boost the green score to 140 inches.

Congratulations to Collins, who is now entered in our Bag-A-Buck contest, making him eligible for a number of great prizes, including the grand prize which includes a 2-day, two-man hunt at Cherokee Run Hunting Lodge. Click here to view the Bag-A-Buck gallery or to enter the contest yourself.

My name is Natalie Garrett, and I am 17 years old. I killed this buck in Person County, North Carolina where I was born and raised. This was an awesome hunt and took two days […]

Cody Rhinehart of Orangeburg killed a huge 8-point buck that has been a frequent visitor on his trail cameras for quite some time. […]

About Brian Cope 1651 Articles
Brian Cope is the editor of CarolinaSportsman.com. He has won numerous awards for his writing, photography, and videography. He is a retired Air Force combat communications technician, and has a B.A. in English Literature from the University of South Carolina. You can reach him at brianc@sportsmannetwork.com.
Website