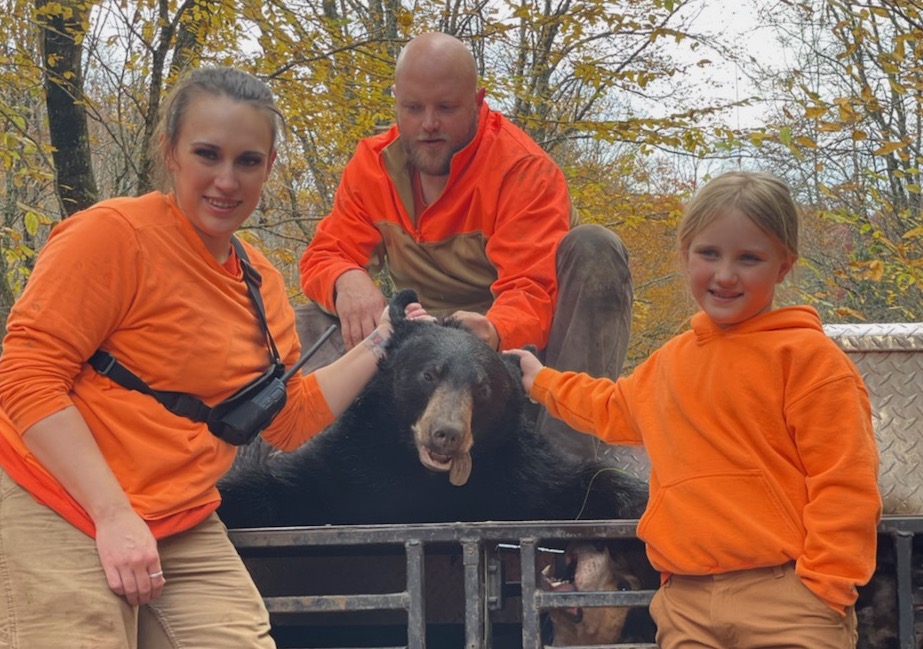 A buckeye and a first bear

Courtney Burgin and her daughter Leddy Ray Burgin, both of Del Rio, TN, each killed a bear on North Carolina’s opening day, Oct. 17, 2022. But the day was about much more than bear hunting.

Courtney is the daughter of Bucky Vance, a well-known bear hunter across North Carolina who still resides in Avery County, which is where Courtney was raised. Their whole family takes the first week of bear season off, treating it as sort of a family reunion.

That’s what bear season is all about to this family — the people and all the parts of hunting. And they eat any bear they shoot as well.

This was 7-year-old Leddy Ray’s first ever bear, slightly younger than her mom was when she killed her first one years ago. It weighed 163 pounds, and she shot it with the same Winchester lever action .44 Mag that her mom killed her first bear with. The gun was a gift to Courtney from her grandfather.

On this year’s hunt, Courtney’s bear, which weighed 162 pounds, came on the first chase of the day. It ran for about 30 minutes. She was prepared to let them bear off the hook if it treed. However, it stayed on the ground and turned to fight their dogs, so she shot it to protect the dogs.

The second chase of the day, which lasted about 20 minutes, led to Leddy Ray bagging her bear.

Between the two bear chases, there were checked by game wardens. During the check, Courtney showed the wardens her lucky buckeye she’d be given as a young girl. Someone then told Leddy Ray she needed a lucky buckeye to get her bear.

After hearing that remark, one of the game wardens pulled a buckeye out of his pocket and gave it to Leddy Ray, saying “here’s your lucky buckeye.”

Moving from that area, they saw bear sign and put the dogs out on what became Leddy Ray’s bear.

When asked what she liked about the hunt, Leddy Ray said she loved how well the dogs did, and that her dog did exceptional. It wasn’t about shooting the bear, but enjoying the entire experience of the hunt. Her mom said she takes excellent care of their bear dogs, feeding them, playing with them and taking care to keep them in top shape to hunt.