Offshore fishing returns to the Carolinas this month; does the past, mild winter point to a big spring in the bluewater? These four captains help iron out the details.

Some offshore fishermen across the Carolinas have gotten a head start on spring. Even though the winter has been relatively mild than usual, the warm-water fish moved to the south, and the arrival this month of warmer water will bring large numbers of fish, and they are eagerly anticipated.

Many seasoned offshore anglers are predicting an early start to spring fishing. Wahoo numbers dropped in January, but they never left totally. Plenty of big fish were caught during January, February and March, along with blackfin tuna found at the first good temperature break. Bluefins were around during witer, mostly east of Cape Lookout, along with a few yellowfins.  Dolphin were farther south, waiting for warm water. Offshore fishing should begin improving by early April and be getting really good by the end of the month, heading into May.

The fishermen who target these big, pelagic fish all have their personal preferences when it comes to the spread of lures they troll behind their boats, both the kinds and locations, but there are a surprising amount of similarities; differences are more like tweaks than big changes.

Mark “Microwave” Chambers runs the charterboat Due South (www.duesouthsportfishing.com) out of Morehead City, N.C., after spending plenty of time in the cockpit with some of the finest captains from Cape Lookout to Cape Hatteras before moving to the bridge.

“I’m a bit old school,” Chambers said. “I run wire leaders most of the year, as I don’t want to miss any wahoo bites from being bitten off. I run wind-on leaders when we’re tuna fishing or are being covered up in dolphin, but I’m worried about what happens when a big, lone wahoo comes in to see what all the action is about. Mono and fluoro don’t stand much of a chance against their sharp teeth.”

Chambers’ trolling spread contains eight lines. Two are bridge poles, two on long outriggers, two on short outriggers and two off the transom. He often keeps the long outrigger lines on the bridge as he sees those baits better than his mate and can make adjustments faster.

The long bridge pole is the longest line down the middle, trolling a sea witch and medium ballyhoo. The long riggers are set equal distances back with the same baits. The short bridge pool is set down the middle, a little bit shorter than the long riggers, with a sea witch ballyhoo in calm conditions and an Ilander Sailure in rough seas. The short rigger lines are next in length and set at roughly equal distances back with the same lures and baits as the short bridge pole. One transom line will be a planer line, with the planer on a bridle rig. Many times he pulls the other transom line with a 1- to 2-pound trolling weight to get it under the surface but not as deep as the planer. When there is a lot of grass, he runs a sea witch and medium ballyhoo or dink bait on the surface instead of the weighted line.

Chambers always has a couple of pitch baits rigged and ready to go for whatever shows up, often a sailfish; he catches a lot on dink baits, rigged as split bills or with a circle hook on top of their head. He also loves to battle big fish, and if there are blue marlin in the area, he puts out at least one large ballyhoo rigged in a chugger lure.

Joe Seegers runs the Hooked Up, a private boat, out of Southport, N.C., but he cut his teeth as a mate in Hatteras and has spent cockpit time with many excellent captains.

“The Hooked Up is a little smaller than many charterboats, but I still run a slightly modified version of the charterboat spread I learned in Hatteras,” Seegers said. “I cut back to seven lines, but have four dink pitch baits ready to go. In general, I usually run smaller baits on my longer lines and larger baits closer to the boat. I don’t run teasers, as they don’t have hooks, but rely on twin diesels to raise fish, and I want them to see big baits when they look up at the sound.”

Seegers’ longest lines are the long outrigger lines, which start 50 to 75 yards back. If he sees tuna breaking but not biting, he may drop them back as much as half the spool of a 50-wide reel. He usually begins with one naked bait and one small sea witch/small ballyhoo on the other, with both being crank-on fluorocarbon leaders.

Seegers runs his bridge pole — carrying a small bait and bright sea witch — between the long rigger lines and the short rigger lines. The outriggers sport wire leaders and use medium ballyhoo rigged into Hawaiian Eye Juniors, Sailures or other larger skirts. These baits are positioned one to two boat lengths back, depending on sea conditions.

Off the transom, Seegers fishes a planer on one side when shallower than 400 feet and usually rigs this on a purple/black or pink sea witch. If there are bluefish in the area, he sets the planer line with a very large bait for mako sharks. The other transom line is a naked, select ballyhoo-rigged split bill with wire when wahoo are around; as dolphin arrive, he switches to a dink bait fished from the transom clip with the reel in freespool. When he hits tuna, the planer line is switched to a silver spoon.

Buddy Smith runs the Underdog (www.underdogsportfishing.com) out of Murrells Inlet, S.C. He mated for several years on marlin tournament boats, then mated several years out of Oregon Inlet, N.C., before returning home last year to run the Underdog.

“Our spring season begins in April with wahoo, and I fish all wire leaders then to prevent bite-offs,” Smith said. “We see some blackfin tuna all along, and as the water warms, dolphin begin to arrive. Neither of these have teeth, so we switch to outfits with wind-on fluoro leaders to avoid spooking any that might be wire shy.”

Smith usually fishes seven lines, but in calm water, he goes with eight. Smith’s bridge pole is the longest line; it almost always carries a Green Machine behind a bird. The larger Greene Machine doesn’t get as many strikes, but it attracts larger fish. The two long riggers are back fairly long, with wire leaders for wahoo and wind-on fluoro when blackfins or dolphins show in good numbers. These are medium ballyhoo rigged into sea witches, with blue/white on one side and black/blue or black/purple on the other. 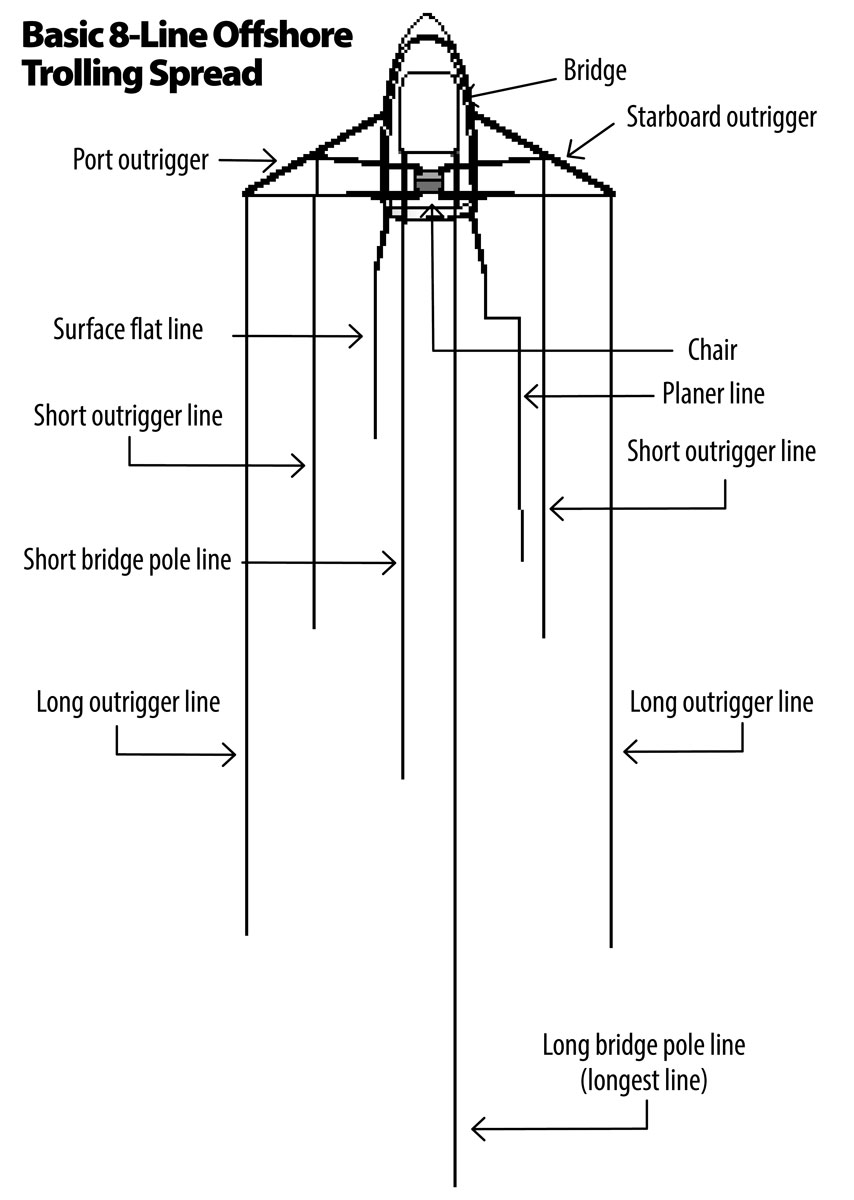 In calm seas, Smith positions a second bridge pole line between the long riggers and short riggers, maybe a bird/Green Machine combo for tuna or a ballyhoo/sea witch for dolphin.

Smith likes to have something on the short riggers that pops. He uses Iland Sea Stars and Sailures and Moldcraft Chuggers. The leaders will be wire early in the season, but mono or fluoro once the tuna and dolphin arrive.

Smith runs two lines from the corners of the transom, one planer line with a blue/white or dark sea witch, the other on the surface in a transom clip to keep the line angle low and the lure in the water. He also keeps several pitch baits ready to go.

Gasper Marino owned and ran the Wadmacallit out of Mount Pleasant, S.C. for many years until he sold it in 2018. He now runs the Wildlife.

“I fish with what I call rotating rods,” said Marino (843-514-4117). “I believe it’s important to keep lines in the water, and this allows me to replace any rod with the next one that is ready. I fish up to a 9-rod spread, and nine times out of 10, they will be rigged with a ballyhoo in a sea witch. Occasionally, I’ll pull a lure or two, but it’s later in the season when marlin might be around; I like the Moldcraft Wide Range because it works at almost any speed.”

One of Marino’s flat lines is fished in a transom clip to keep the line angle low. The other may be also. He runs a planer line from the transom earlier in the season when wahoo are around and when he is fishing shallower or in dirty water. While he believes the planer line can sometimes save the day, he is also concerned a planer may flash too hard in water that is very clear and might sometimes spook fish. He begins with dark sea witches, then lightens the colors as the sun gets higher, but he often switches back to dark colors in the early afternoon when the action tends to slow.

Marino makes his own sea witches in 3/8- to 2-ounce sizes in different head shapes that pull a little differently. He tracks where sizes and colors at all times and keeps those that are producing in the same locations and rotates colors and heads on the other lines to find what is working that day. He doesn’t shy away from trying new things, and each fisherman should find his own equation, remembering it’s all about having fun.

Some fish species roam the Gulf Stream year-round, but. their numbers increase as the water warms and baitfish schools proliferate in the spring.

The Gulf Stream is essentially a winding, warm-water river that flows northward through the ocean off the Carolinas. Extended periods of wind may move it closer to shore or farther away. As it moves, it carries baitfish, and its course may also be altered by collisions with subsurface structure.

Eddies bring Gulf Stream water to structure not under the main Gulf Stream flow. Several of these just inshore of the 100-fathom curve are well known and hold offshore fish well much of the spring. North to south, some of the well-known structure includes the Big Rock, Swansboro Hole, Same Ole, Steeples, Blackjack Hole, Winyah Scarp, Georgetown Hole, Southwest Banks and Edisto Banks. There are also a host of smaller and lesser know locations that are often productive.

Dolphin tend to arrive off the Carolinas ing May. They are the fastest-growing of the offshore pelagic fish and have a high reproduction rate, so there is a liberal limit of 10 fish per angler. The average year-old dolphin is 34.2 inches long. They generally begin spawning at 4 to 5 months and spawn several times a year. Dolphin are one of a few fish where the male grows faster, larger and lives longer.

Blackfin tuna are smaller tuna; they may move closer in for a while in the spring and fall, but are typically found around the inshore edge of the Gulf Stream. Yellowfin tuna are the most-prized of the Atlantic tunas; they are primarily caught from Cape Hatteras north.

A couple of decades ago blackfin tuna weren’t appreciated as much as they are today. They were considered secondary to yellowfin tuna, but when yellowfin migration routes changed, they began to grow in popularity. Blackfin will hit trolled lures, rigged baits and readily respond to vertical jigging.