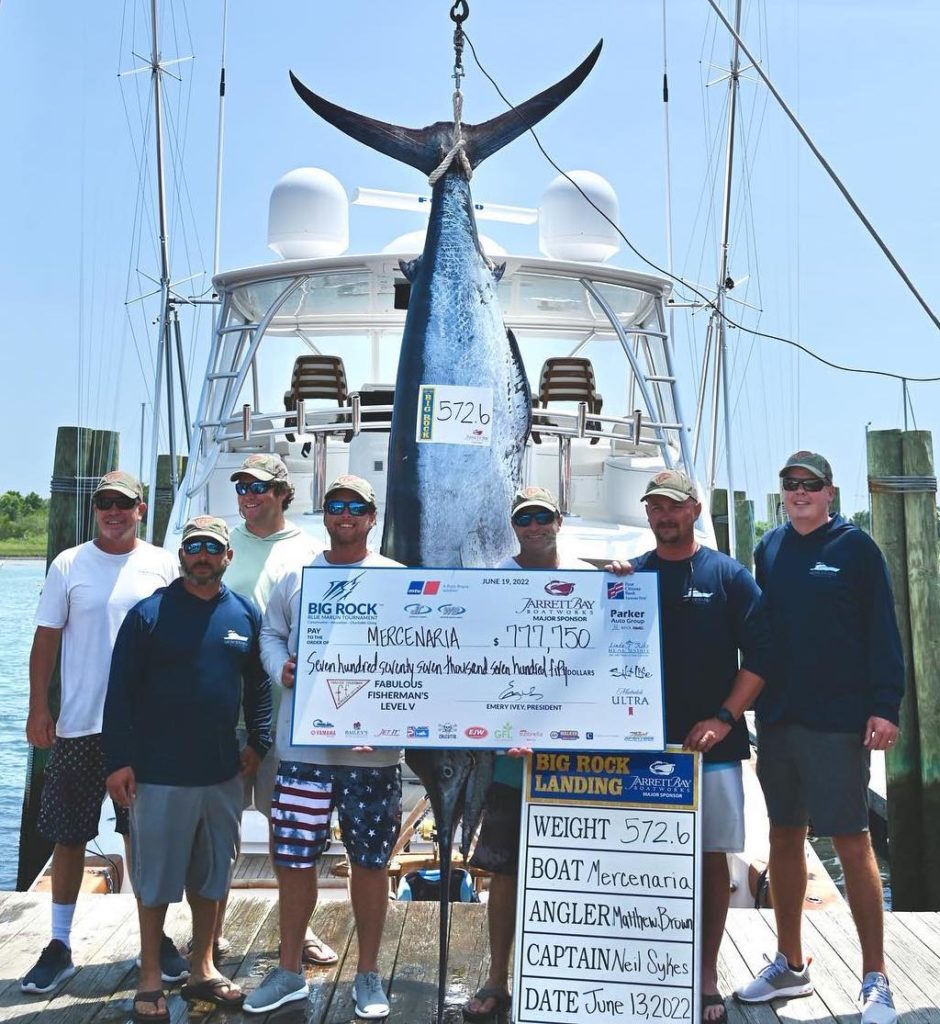 MERCENARIA, a 72-foot Viking based out of Cherrystone, VA, caught one fish during Day 1 of the 2022 Big Rock Blue Marlin Tournament. It was a blue marlin and it netted them the Fabulous Fisherman’s prize of $777,750 for bringing the first blue marlin of the event to the scales.

Their blue marlin weighed 572.6 pounds, and currently sits atop the leaderboard for that species at the end of Day 1. If no one weighs a bigger blue marlin during the tournament, the team will take home an additional $3,489,813.

With Capt. Neil Sykes at the helm, the MERCENARIA hooked up with their first fish of the day at 11:30 a.m. They boated it within an hour and called it a day, heading to the docks in hopes that no other boat would beat them in. They weighed the fish at 2:04 p.m.

WALL HANGER, a 63-foot Spencer, hooked up before MERCENARIA in a fight that lasted the better part of the day. They boated a blue marlin as well, but didn’t make it to the scales until 7:30 p.m. It weighed 556.4 pounds, putting them in second place for now.

HIGH YIELD, a 57-foot Spencer, also brought a blue marlin to the scales on Day 1. Their fish weighed 536.8 pounds, good for third place.

In the Release Division, WAVE PAVER, a 75-foot Bayliss holds the lead after Day 1 with 1600 total points. They released four blue marlin on the day.

For the complete leaderboard in all events at the Big Rock Blue Marlin Tournament, click here.

About Brian Cope 2203 Articles
Brian Cope is the editor of Carolina Sportsman. He has won numerous awards for his writing, photography, and videography. He is a retired Air Force combat communications technician, and has a B.A. in English Literature from the University of South Carolina. You can reach him at brianc@sportsmannetwork.com.
Website