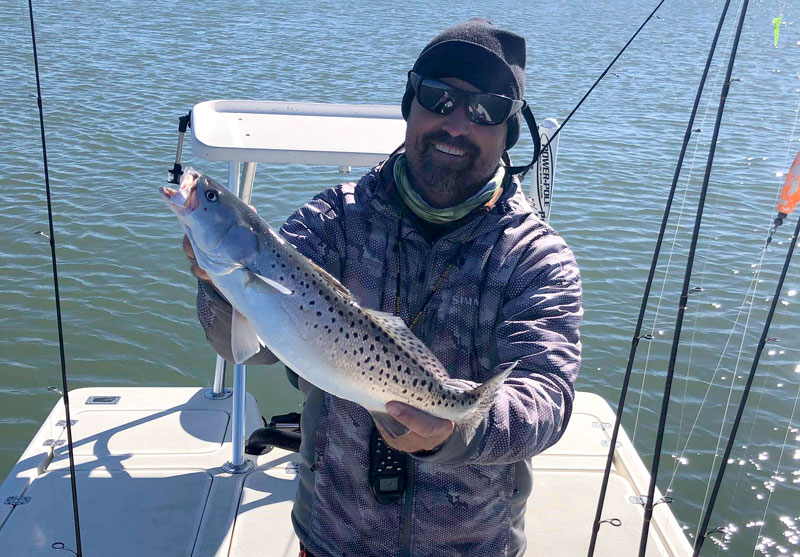 Anglers wait all year for the cooling trends to begin, and when the calendar turns to October, they get fired up in anticipation of the fall speckled trout rally. A small fishing village on the tail end of South Carolina’s Grand Strand, Murrells Inlet is one of the best places to get in on the action.

Dyed-in-the-wool anglers can find a limit of specks in the Carolinas at any time, but it’s no secret something spectacular happens in October. In the matter of a single day, the bite can turn from an occasional strike here and there to constant action in all the typical spots. The fish seem to show up overnight, and every angler in the region eagerly anticipates it.

One of the chief antagonists of South Carolina’s speckled trout is guide Dan Connelly of O-Fish-Al Expeditions in Murrells Inlet. Even though he will chase every fish species inshore and within 10 miles of the beach, the spotted seatrout is undoubtedly his most-favored flavor.

“October is a special time around here,” said Connelly (843-241-7022). “We catch trout all year, but the hot action starts firing up in October from a chain of events that crescendo during this time.”

According to Connelly, fish are traveling south, trailing large migrations of food. They leave their summer feeding and spawning grounds in the northeast.

Cooler water temperatures will be noticeable this month

“Water temperatures cool faster north of us, sending huge migrations of mullet, menhaden and shrimp down the beach to us. The trout will follow their food south,” he said. “These fish are accustomed to making this trip every fall to their winter homes. But the cold weather surely gives them a little push.”

October is the first month in which weather events are significant enough to impact water temperatures, triggering the bait and predator migration. A cold front with nightly temperatures dipping into the 40s will trigger things. And within a day or two, these fish seem to show up in big schools with hearty appetites.

Fortunately for anglers, the migratory trek and cooling waters cranks up their appetites. The bottom line is, the fish arrive hungry and ready to fill up on shrimp, mullet, menhaden or whatever they can find.

Keep your options open for bait and lures

Connelly uses a wide collection of bait and lure options. That’s because frankly, they will all produce bites from speckled trout.

“Early fall is an epic time to catch giant trout and big numbers of fish on topwater plugs. And there is nothing more fun than watching a fish blow up on top of your lure,” he said. “But we will use soft-plastic paddletail lures, artificial shrimp, and then live shrimp under a slip float.”

Live shrimp is the kryptonite for trout. Fish may sometimes be finicky about certain lures, but not a lively shrimp in their faces. Live shrimp under a float is one of Connelly’s ways to put fish in the boat fast. So he will get a tank-full of shrimp when he can.

“I love using live shrimp in the fall. But be prepared to burn through a lot of bait, as most of the other bait-stealing critters are still around in full force in October,” he said.

About Jeff Burleson 1267 Articles
Jeff Burleson is a native of Lumberton, N.C., who lives in Myrtle Beach, S.C. He graduated from N.C. State University with a degree in fisheries and wildlife sciences and is a certified biologist and professional forester for Southern Palmetto Environmental Consulting.