Multiple species are biting along the South Carolina coast

From the Grand Strand to the Lowcountry, the coastal fishing report is very good. Many different species of fish are feeding heavily. And as the weather continues to warm, the feedbag should stay on for some time to come. It’s good to be flexible on what you want to catch right now, because the hot bite of yesterday might not be the same species today.

But one thing’s for sure; if you’ve got a hook in the water, you won’t have to wait long before something hits.

In the Little River area, Patrick Kelly with Capt. Smiley Charters is catching a big variety of fish. Black drum and redfish are plentiful, and the flounder have recently begun showing up. He said trolling with live mullet or mud minnows is always a good bet for flounder.

Kelly has also been catching nice trout, and he expects the bite to stay strong for some time.  Far fewer people are fishing this time of year, and Kelly said that’s giving the fish a break, and leaving more for those who are getting on the water.

In Murrells Inlet, Capt. Justin Witten with Ambush Sport Fishing is putting his clients on bonito, redfish, black drum, and flounder. Weakfish are also biting well in areas like the 3-mile reef, and some of these fish are pushing four pounds and better.

Cobia have shown up

Georgetown’s waters are also full of eager fish, but fewer anglers than normal to catch them. Capt. Spencer Lynch of Southern Inshore Charters is limiting his charters to two anglers (three including himself) like many other charters. He said redfish, black drum, and sheepshead are all biting strong. He’s caught big numbers of all three species on the same trip numerous times lately, and he said the fishing is about as good as it gets right now.

Down in Charleston, Capt. Addison Rupert with Lowcountry Outdoor Adventures is putting his clients on plenty of redfish. Many of these are trophy, over-the-slot fish. Numerous clients have caught their “fish of a lifetime” with Rupert lately. Flounder are biting good on some days, and he   put the first cobia of the season in his boat on April 21. 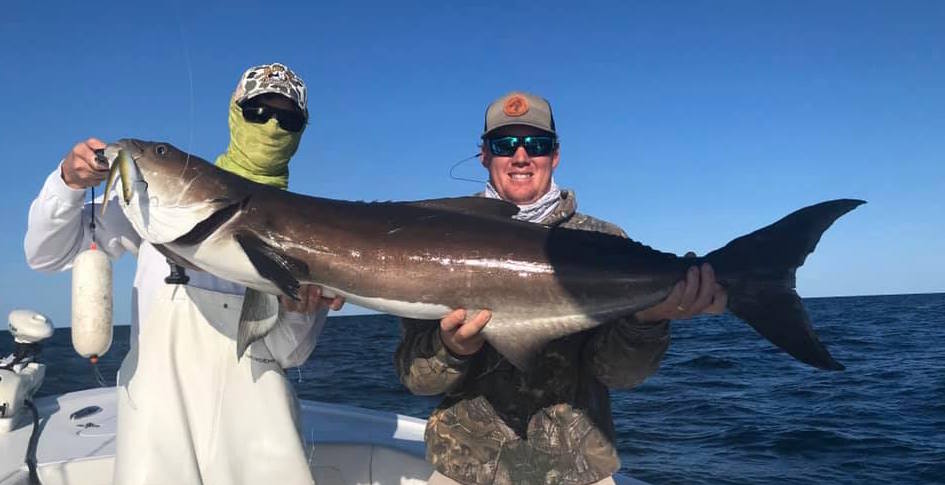 Capt. Addison Rupert of Lowcountry Outdoor Adventures put one of his clients on this nice Charleston-area cobia on April 21.

The weather is perfect, but the hot summer is coming

Further down the coast, Capt. Rick Percy of Reel Chance Charters in Beaufort said the cobia are there too, although he has yet to hook one. But everything else is a different story. He’s put his clients on tons of redfish, speckled trout, and black drum. And fishing on the nearshore General Gordon recently, his guests caught 39 bluefish, 24 weakfish, and 14 black sea bass. He said some of the weakfish were in the 3 to 4 pound range.

At Hilton Head, Palmetto Lagoon Charters’ Capt. Trent Malphrus is catching redfish, and speckled trout in the Palmetto Dunes lagoon. And some of his clients have caught tarpon on the fly recently there too. Last week, his son Gage caught his first cobia while they were fishing outside of the lagoon.

If you’ve got the itch to fish, now is the time to do it. Cool mornings and warm days are the norm right now, but before you know it, it will be sweltering hot.

About Brian Cope 1651 Articles
Brian Cope is the editor of CarolinaSportsman.com. He has won numerous awards for his writing, photography, and videography. He is a retired Air Force combat communications technician, and has a B.A. in English Literature from the University of South Carolina. You can reach him at brianc@sportsmannetwork.com.
Website