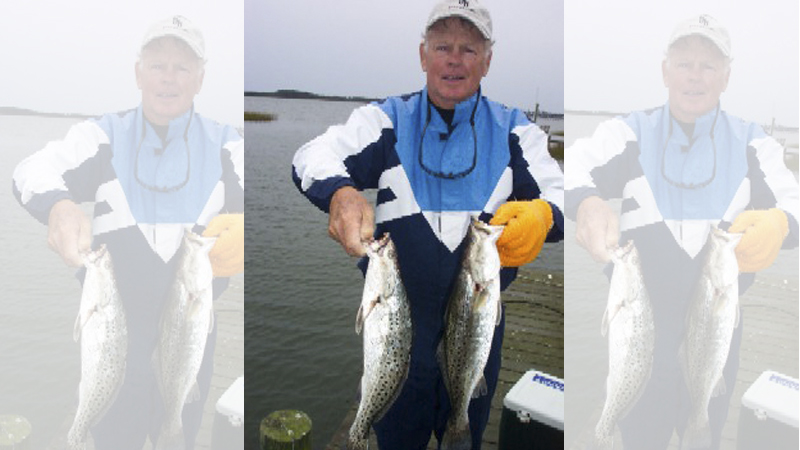 Fishing after dark is the ticket for big specks

Charles Brown, a fifth-generation Core Sound native, remembered a fishing technique from his childhood, tweaked it a little and discovered a way to allow several anglers at once to enjoy catching huge spotted seatrout, aka specks, during winter.

“I’ve been doing (this) since I was a little boy. But I did it from the shoreline,” he said. “It’s been a well-kept secret. Now I’m doing it from a boat.”

Brown, who operates Old Core Sound Guide Service (252-728-2422) out of his Gloucester home, is talking about fishing Cape Lookout’s rock jetty at night.

Not only that, but Brown said he catches mostly big ones.

Brown said he once, along with camping anglers, fished the surf at South Core Banks at night for big specks.

Leave the soft plastics at home

“All your biggest trout are caught with MirrOlures, not soft plastics,” he said.

“The only trouble is it takes a little learnin’ to find out how to not get hung up (on the rocks in the jetty),” he said. “One night I had three boys from New Bern with me. And they lost three MirrOlures on the rocks.”

He doesn’t use white lights, but only an ambient LED red light inside his 24-foot bay boat to illuminate the deck.

“Bright lights spook fish. So I don’t use white lights,” he said.

He said each night is different “and the fish will tell you what lure and color” they want. He usually starts with dark-colored MirrOlures.

“I throw a 808 with a black back, gold sides and chartreuse belly,” Brown said.

Other color combinations include Purple Demon and Black Night Stalker.

Brown said anglers can often catch 15 to 16 specks per night from 4 to 6 pounds.

“I’ll fish out there until the dark of the moon (a new moon),” he said.

Best times are when he has a northeast or north wind when the jetty is protected by the tip of Cape Lookout.

“If it’s a southwest, south or southeast wind, it’s too rough,” Brown said.