One suspect is still at large

SCDNR officers arrested a Beaufort County, S.C. man on Jan. 7, 2021 and charged him with a number of offenses related to illegal shellfish harvesting. According to the Beaufort County Magistrate’s office, Dominick Lesesene of St. Helena Island was booked and charged with six citations.

Lesesene allegedly harvested shellfish in a closed area, leading to one of his charges. He was also charged with trespassing, littering, violating two watercraft regulations, and violating Article 9 of the state’s provisions on shellfish.

The arresting officers allege that Lesesene was harvesting these shellfish, which were potentially contaminated, in order to illegally sell them into the local commercial shellfish market.

The following comes from the South Carolina Game Wardens Facebook page on the matter:

After information was received regarding illegal shellfish harvesting in an area closed by DHEC due to health concerns, Beaufort County Game Wardens in cooperation with DHEC Shellfish officers began monitoring this area for activity.

Two individuals were observed exiting the vehicle and appeared to be preparing to enter the marsh. Past experiences with these suspects indicated a high probability that there would be an attempt to flee.

Beaufort County Sheriff’s Office was notified and their helicopter was put on standby. SCDNR Game Wardens were able to observe and video the suspects harvesting oysters in the closed area.

When approached, the suspects attempted to flee the area. SCDNR Game Wardens, DHEC shellfish enforcement officers, BCSO Aviation , SCDNR Aviation, SCDNR K-9 unit, and Beaufort City Police were able to arrest the main suspect for trespassing to harvest shellfish, unlawful harvest of shellfish in a closed area, as well as multiple other violations.

Attempts are still being made to identify the second individual who was not located. The boat that was used was seized, and the vehicle of the arrested suspect was towed. Over 20 bushels of adulterated illegal oysters were seized and disposed of according to law. These potentially contaminated oysters were intended to be illegally placed in the local commercial shellfish market.

This combined effort of SCDNR, SCDHEC Shellfish, BCSO, and Beaufort City PD was highly successful in keeping potentially dangerous product out of our seafood markets and off the tables of the citizens of South Carolina. 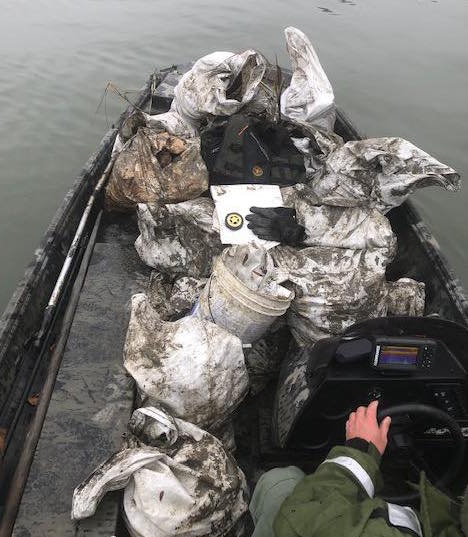 On the latest episode of the PG and Boatgirl Outdoors Podcast, the hosts talk about small game hunting with SCDNR’s Michael Hook. […]

A million dollar grant from USFWS is being used by SCDNR for a wetland renovation project at the Samworth WMA in Georgetown County. […]

Why do the Carolinas have Arkansas blue catfish?

Blue catfish are among the most popular freshwater gamefish in the Carolinas. Here’s why some anglers call them Arkansas blues. […]