Clark Purvis could not have known just how remarkable that striped bass he recently caught would turn out to be.

Sure, it was a big fish – 40 inches long – given that it was caught in the Roanoke River. Most striped bass caught in North Carolina’s sounds and rivers range between 16 and 24 inches. But that’s not what made the fish so special.

It was the information researchers with the N.C. Division of Marine Fisheries’ Tagging Program got from the tag on the fish that showed how extraordinary it was.

Purvis’ striped bass was originally tagged 25 years ago, and that is the longest period between the tagging capture and fisherman recapture of any fish reported to the N.C. Division of Marine Fisheries during the agency’s 40 years of tagging fish.

What’s more, the fish was estimated at 6 years old when it was tagged, making it 31 years old now and one of the two oldest striped bass recorded on the East Coast. Another 31-year-old striped bass was caught in Maryland in May of 1992.

Purvis, who is from Hobgood, N.C., caught the striped bass on April 29 in the Roanoke River above the Hamilton boating access area. He was using a hard plastic, shallow-diving swim bait. The fish had a pink tag in it, so Purvis cut it off, released the fish and contacted the division with the tag information. The division no longer uses pink tags for its studies. 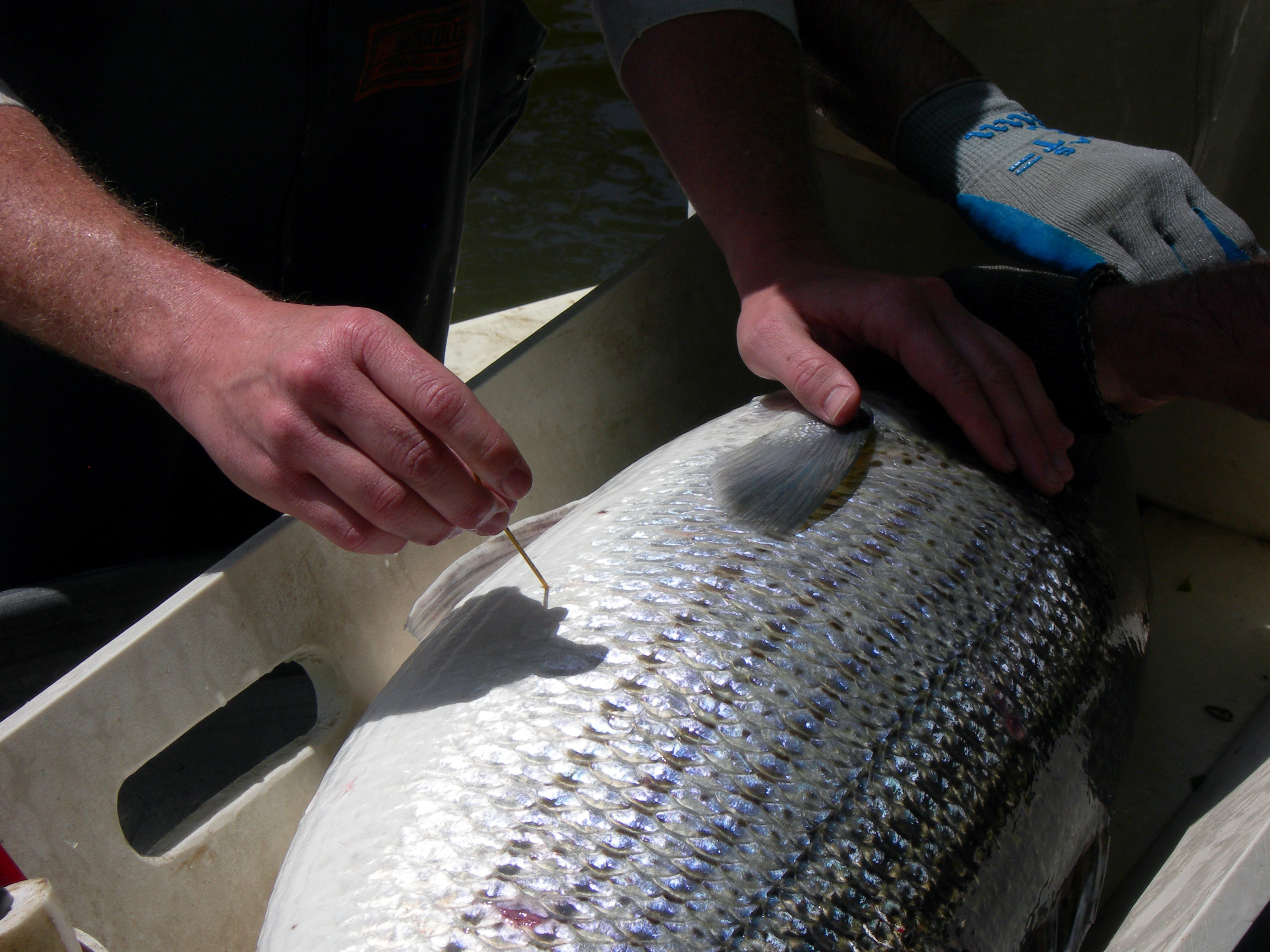 The striped bass was originally tagged by a joint tagging effort with the division and the NC Wildlife Resources Commission on May 8, 1995 just below Weldon, N.C., waters that are part of the Albemarle-Roanoke striped bass spawning grounds. Tagging records show the fish was a male and 21 inches long when it was tagged and was likely from the 1989 year-class.

Based on migration patterns for Albemarle-Roanoke striped bass, once this fish reached 10 or 11 years old, at about 30 to 34 inches long, it would have joined the coastal striped bass migration, leaving the Roanoke River each year after spawning and migrating north up to the  New Jersey, New York, Massachusetts area, then coming back each spring to the Roanoke River to spawn.

Until now, the longest any fish remained at large after the division tagged it was about 20 years.

Each year, staff with the Division of Marine Fisheries’ Tagging Program tag striped bass, red drum, spotted seatrout, southern flounder, and cobia in North Carolina waters. Researchers with the program use the information they get from tag returns to study the migration, growth, habitat use, population structure, and mortality rates of fish.

Anglers who encounter a tagged fish should cut the tag or tags off (some fish may have two tags, one on each side), then write down the tag number, catch date, location caught, and the total length of the fish. Anglers should save the tag and the other information and call the division at 800-682-2632 or report the tag online. Those who return a red tag to the division with the catch information will receive a $100 reward. Those who return a yellow tag will receive a hat, $5 or other reward. All anglers who return tags to the division receive a certificate of appreciation, and all the returned tags are entered into a division end-of-year drawing.

My name is Mike Larson. I caught this 24in red drum this past Saturday on the incoming tide, while fishing from a boat, using a carolina rig with fresh shrimp during an incoming tide. We […]

Santee Cooper’s 2020 striper harvest season opened on Oct. 1, and the fish are biting like mad on live bait and artificial lures. […]

First flounder Here is a door mat! This 8 pound flounder was caught by Jordan Pino down in Southport NC. Not only was it Jordan’s first flounder ever, his dad Derek was there to witness […]