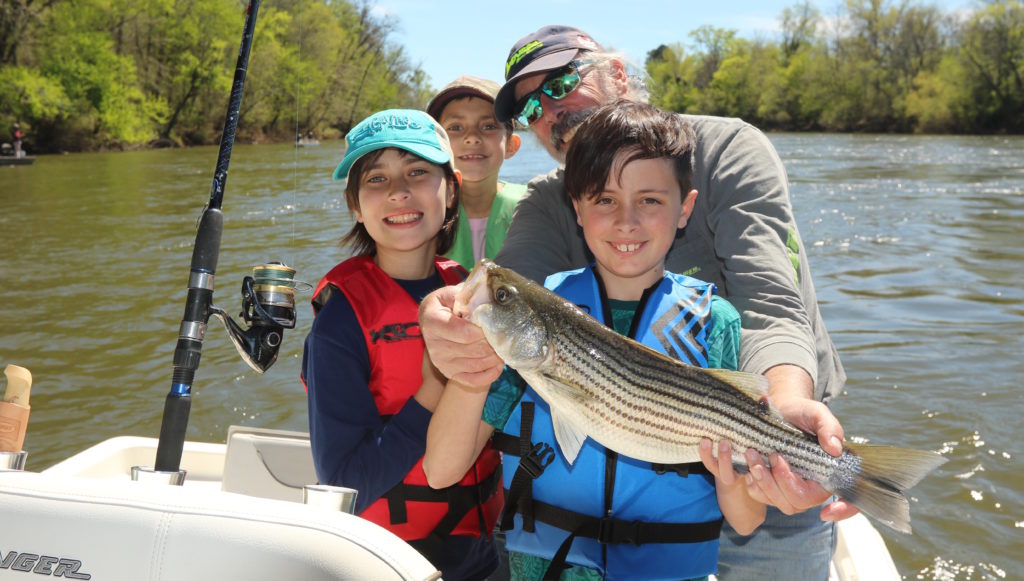 The N.C. Wildlife Resources Commission issued a reminder to anglers that the 2021 striped bass harvest season in the Roanoke River Management Area opens this Saturday. Harvest dates will be:

A proclamation outlining significant changes to the season was issued by the Wildlife Commission in January. Modifications to the framework became necessary when the harvest quota in the Roanoke River was reduced from 68,750 pounds to 12,800 pounds.

The reduction was deemed a necessary conservation action intended to rebuild the striped bass population. Results from a 2020 stock assessment of the Roanoke River/Albemarle Sound conducted by the N.C. Division of Marine Fisheries, with assistance from the Wildlife Commission, indicated that the stock was overfished and overfishing was occurring.

Although the harvest season will be limited in 2021, the separate weeks selected in each river zone coincide with the highest average weekly harvest totals observed by Wildlife Commission fisheries staff over the last nine years.

Dates were selected to maximize harvest

“We knew that significant reductions were necessary, but we still wanted to select days which would maximize harvest opportunities for our anglers. As season options were considered, we identified the days where harvest was historically the highest in each area of the river. Although the timing of fish migration into the river is different each spring, daily harvest during the two weekly periods selected averaged between 700 and 1,300 pounds of striped bass per day,” said Commission Coastal Fisheries Supervisor Chad Thomas.

Size limits and daily creel limits will remain the same. During the two separate harvest periods, the minimum length limit is 18 inches, and no striped bass between 22 and 27 inches (the protective slot) may be possessed at any time. The daily creel limit is two fish, only one of which may be larger than 27 inches.

“The striped bass population on the Roanoke River is currently in a period of decline as the estimated number of spawning females has dropped below our conservation targets,” said Thomas. “This situation has been made worse as natural reproduction has been poor for the last several years. Reductions in the harvest of spawning fish is intended to increase the number of viable eggs in the river and help promote good numbers of juvenile striped bass.”

Catch and release is allowed outside of harvest season

The N.C. Estuarine Striped Bass Fishery Management Plan is in the process of being amended, and additional management strategies to aid with stock recovery on the Roanoke River will be identified and presented to the public for input in late 2021.

Despite the shortened harvest season, anglers can continue to catch and release striped bass throughout the spring. To reduce handling stress on fish that are released, the Wildlife Commission recommends anglers use a single barbless hook or a lure with a single barbless hook, a requirement from April 1 through June 30 when fishing in the upper Roanoke River zone above the U.S. 258 Highway bridge near Scotland Neck.

About the N.C. Wildlife Resources Commission

Due to COVID-19, we encourage the public to visit ncwildlife.org to purchase fishing, trapping and hunting licenses and to renew a vessel registration.

Since 1947, the N.C. Wildlife Resources Commission has been dedicated to the conservation and sustainability of the state’s fish and wildlife resources through research, scientific management, wise use and public input. The Commission is the state regulatory agency responsible for the enforcement of fishing, hunting, trapping and boating laws and provides programs and opportunities for wildlife-related educational, recreational and sporting activities.

History Roanoke Island is a speckled trout hotspot when May arrives. […]

Rodney Locklear of Hamlet, N.C. fished the Santee Cooper lakes with Capt. Leroy Suggs out of Blacks Camp earlier this month, and caught a 26-pound striper. […]

Tyler Terry caught this striped bass in early April while fishing on the lower Roanoke River with his dad, Papa, and Scooter Lilley from CWW Inshore Charters.