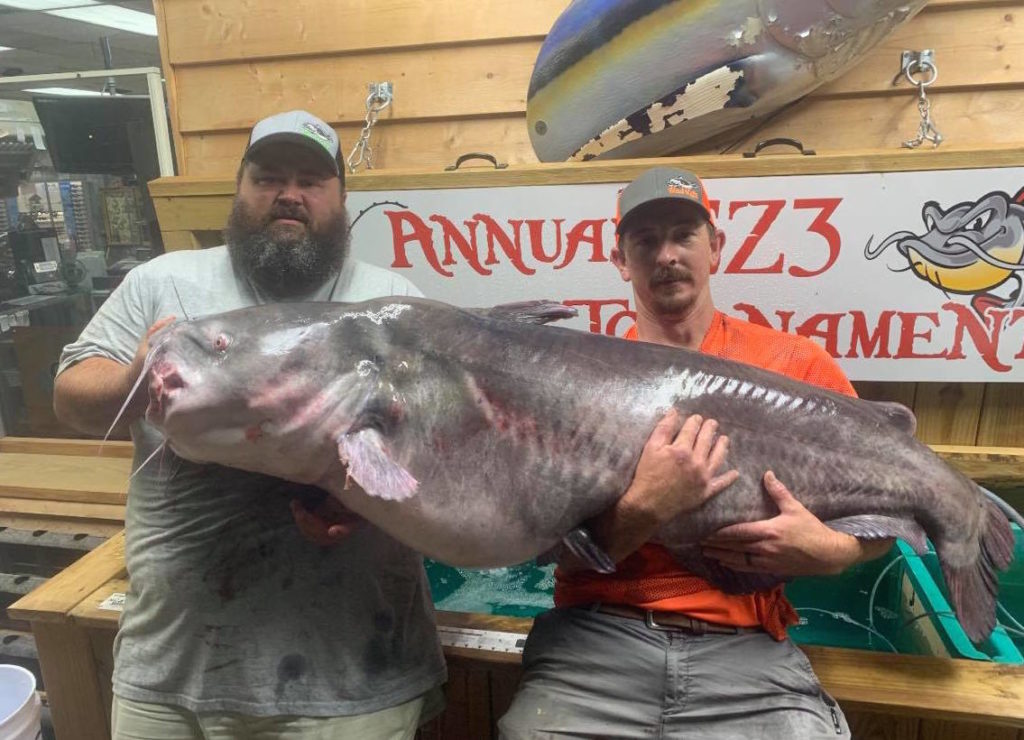 Angler caught the 127.1-pound catfish in the Roanoke River

Rocky Baker of Four Oaks, N.C. caught a 127.1-pound blue catfish while fishing in the Roanoke River on July 10, 2021. The fish has been certified as the new North Carolina state record. It beats the previous record of 121 pounds, 9 ounces, which was caught last year by Joey Baird on Lake Gaston.

Baker caught the fish on a Mad Katz Orange Catfish Down medium-heavy fishing rod coupled with a Penn Fathom 20 reel, and 40-pound test Berkley Pro Spectrum line with a 100-pound leader. He was using an 9/0 Charlie Brown hook baited with a whole 3-inch gizzard shad. He was fishing with his friend Justin Clifton, one of the designers of the Mad Katz rod.

Once the big catfish hit, Baker said the fight took a solid 15 to 20 minutes. And it wasn’t just him reeling dead weight. It was an all out brawl. He knew right away it was going to be an exceptional fish.

“We knew from the get go based on the way we have our drags set. It slammed it, and it was rocking and rolling, pulling drag right off to start with. So we immediately knew it was a good fish. It crossed the river, left to right, a total of six times,” he said.

Once Baker got the fish within range, Clifton got the head of the fish in their net. And with everything they had, the two anglers lifted the fish into the boat.

Baker and Clifton released the fish back into the Roanoke

The night didn’t begin as a record-breaking quest. They were simply hoping to catch some eating-size catfish for another friend. But it didn’t pan out that way. Before the big catfish hit, they caught several other fish ranging between 30 and 51 pounds. They planned to make a whole night of it though, starting the trip around 6 p.m. But when they got the big fish in the boat around 9:30, they changed plans.

“We were going to fish all night. But once we got that big one in the boat and it bottomed out my 110-pound scale, we had a feeling it might be a new state record. A friend brought us a big tank that we could keep the fish alive in, and he had a bigger scale. We weighed it again on that scale and then we felt like we needed to get to a certified scale,” said Baker.

They knew the folks at EZ Bait and Tackle in Goldsboro had two things they needed right then — a large oxygenated tank and a certified scale. But they were almost two hours away from the store. They made the drive and put the fish in the tank around 1 a.m. Sunday morning. Right away, Baker was worried about the fish.

“I did not want that fish to die. That would have just killed me. But it wasn’t doing too good in the tank. Luckily, Dwayne Bevell, the owner of EZ Bait and Tackle, got there and got more oxygen lines running in the tank. And he also suggested we close the lid, which I hadn’t thought of. That just made it dark in the tank to put less stress on the fish,” he said. “That really helped a lot. Dwayne is really knowledgable about what to do in situations like this and how to keep a fish alive.”

At 5:30 a.m., NCWRC fisheries biologist Ben Ricks showed up to certify the catch as the new state record. Everything checked out, and everyone congratulated Baker on the catch.

Aside from being the North Carolina state record, Baker’s fish is the third largest blue catfish state record ever caught on rod and reel in the United States. Nick Anderson’s Virginia 143-pound blue from Kerr Lake/Buggs Island in 2011 and Greg Bemal’s Missouri 130-pound blue from the Missouri River in 2010 are the only two blue cat state records in the nation bigger than Baker’s.

Sweet relief as the fish swims off 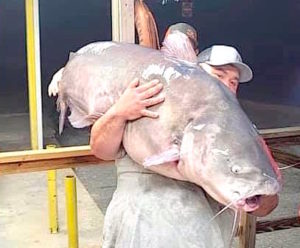 Baker said the most important moment of the whole trip took place after Ricks certified the catch. He and Clifton drove the fish back to the Roanoke where they watched it swim away, seemingly no worse for the wear. Baker could scarcely put into words how happy he was to see it swim off.

“That meant so much to me to see it swim off. After what that fish went through, I just didn’t know if it was going to happen. But we got it back in the water and in just a few minutes, it swam off on its own. And that was a huge relief to me, watching it swim off,” he said.

Big red drum are patrolling the waters of the Neuse River throughout the summer. Catch your share with these tips from a local guide. […]

Saltwater tactics to beat the heat

About Brian Cope 1943 Articles
Brian Cope is the editor of CarolinaSportsman.com. He has won numerous awards for his writing, photography, and videography. He is a retired Air Force combat communications technician, and has a B.A. in English Literature from the University of South Carolina. You can reach him at brianc@sportsmannetwork.com.
Website