Their biggest fish weighed 47.7 pounds. Their second biggest weighed 38 pounds. And their third fish tipped the scales at 18 pounds. They took home $1300 in prize money.

The team caught a total of four fish on the day. The tournament limit was three, and the one they tossed back was not their smallest.

But that didn’t hurt their standings. They would have won the tournament even if they’d only brought their top two fish to the scales. Those two fish combined for 85.7 pounds. The second place team, Set ‘em & Net ‘em, had a total of 82.65 pounds.

Wolfe said the conditions were perfect for the way he prefers to fish. Drifting sideways is his favorite tactic, but it’s not always feasible, especially when the wind doesn’t cooperate. But on tournament day, the wind was just right.

“When you drift sideways, you just cover a lot more ground. Your rods are spread out the entire length of your boat. So instead of just covering five or six feet (like you would from the back of the boat if trolling), you’re covering more than 20 feet. We were able to do that all day,” he said.

“I can’t say enough about those Drifting Stix. We fish with Santee rigs, but instead of egg sinkers or slinky weights, we use Drifting Stix. They are very thin, and streamlined to get you through all the snags along the bottom of the lake. It’s extremely rare to get hung up when using them. Where egg sinkers and even slinky weights get hung up, Drifting Stix will slide right through. Every so often, I’ll think I’m hung up. But by the time I move toward the rod to free it, it comes loose. That saves so much time,” he said.

They were fishing in the lower lake, and drifting over depths that ranged from 15 to 25 feet. For bait, they used a combination of live and cut bait purchased from Jamie K Outdoors in Fort Lawn. 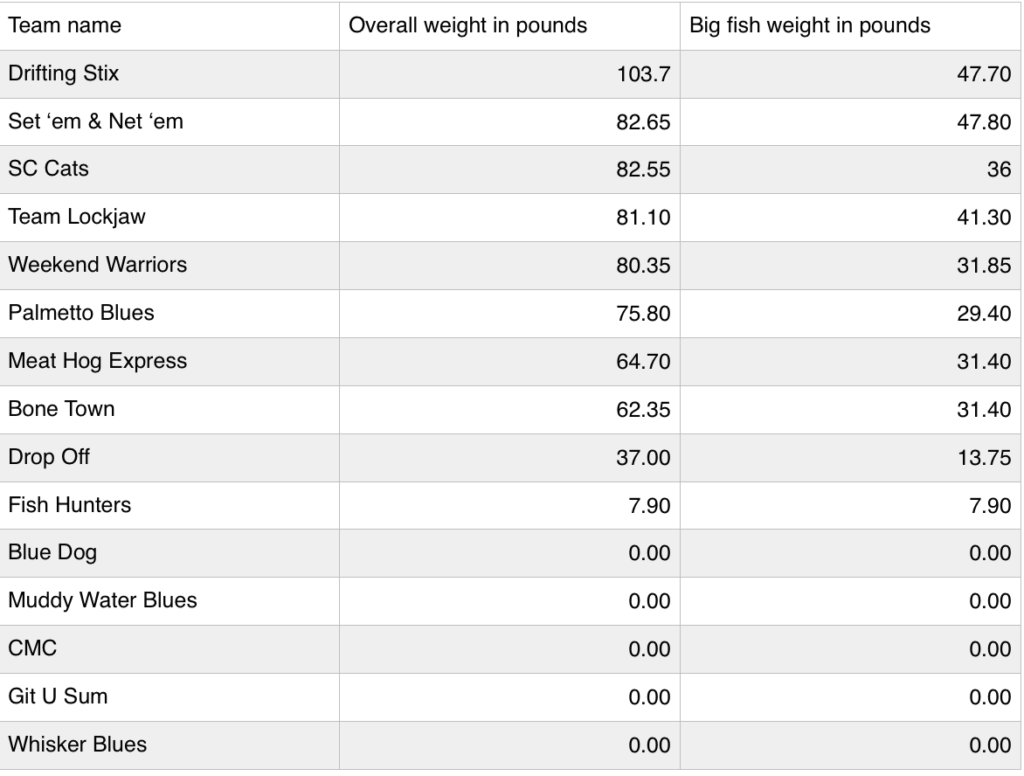 Hunting guide Buck Koon got a bit of a scare earlier this week when a harvested 9-foot Santee gator clamped its mouth shut on his hand. […]

Darlington S.C.’s Charlie Weatherford caught his biggest catfish yet, an 84-pound Arkansas blue while fishing at Santee on Sept. 13, 2020. […]

Gaston’s big blue cats are on the move in September

About Brian Cope 1649 Articles
Brian Cope is the editor of CarolinaSportsman.com. He has won numerous awards for his writing, photography, and videography. He is a retired Air Force combat communications technician, and has a B.A. in English Literature from the University of South Carolina. You can reach him at brianc@sportsmannetwork.com.
Website