North Carolina’s outdoor enthusiasts and its wildlife lost an icon May 18, 2021 with the passing of Eddie Bridges.

Bridges, 87, a resident of Greensboro and native of Morganton raised more funds for wildlife habitat conservation during the past 45 years than any Tarheel State citizen as a two-term member of the N.C. Wildlife Resources Commission and later as executive director of the N.C. Wildlife Habitat Foundation.

After Gov. James B. Hunt appointed him to the Commission in 1976, Bridges, an Elon College graduate, discovered that the agency managing the state’s fish and wildlife operated on a meager $9 million annual budget. As a commissioner, he created the N.C. Wildlife Endowment Fund, which raised an untouchable amount of money that will grow forever. The Commission may spend only a portion of its accrued interest.

Today the fund’s principal has grown to $137 million through lifetime hunting, fishing and trapping license fees plus magazine subscriptions and private donations. The Commission has spent $50 million for wildlife conservation programs, more than five times the agency’s 1976 budget.

He introduced numerous people to the outdoors

But Bridges’ personal legacy was more than money; it included his love of introducing youngsters to the outdoors, particularly hunting and fishing.

Bridges donated all his awards

Bridges, who drew no salary, donated his awards to the organization. He is the only American to earn four national conservation awards and two state honors. He also was named to the N.C. Sports Hall of Fame, the only conservationist in the hall.

Bridges also used a cost-sharing wrinkle to Foundation donations that has added $200 million to wildlife conservation since 1992. 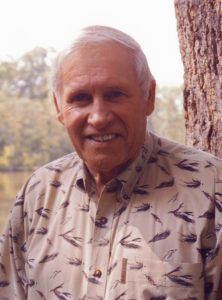 “Hunters and fishermen generate $2.3 billion annually for North Carolina’s economy, and no other recreational sport can say that,” Bridges once said.

Bridges’ most-ambitious project included his first venture into saltwater habitat. He secured donations from multiple businesses and pledged matching funds from the Foundation that totaled $1.2 million to jump-start Onslow County’s New River “Oyster Highway.” The money paid for oyster reefs and oyster transplants in the river with a goal of creating clean water for humans, improving saltwater fish habitat and providing a healthy population of oysters.

“I’ve watched what he’s done and use him as a role model for the great outdoors, not only for me but for many people,” Childress once said.

Bridges’ motto was “Don’t Let the Dream Die” and it remains the Foundation’s credo.