Bass fishermen won’t do much better than a trip to Lake Murray this month, as the spawn approaches.

As far as Ben Lee of Columbia is concerned, there is no better month to fish on Lake Murray than March.

“For a fisherman looking for … other fish, March may not be that great on Lake Murray,” said Lee, who has fished tournaments and guided on Murray for years. “But for the bass fisherman there is no better time.

Everywhere, but not as spread out as they are the rest of the year.

Outside of the early spring, bass fisherman have a good deal of ground to cover because bass will be looking for structure almost anywhere on the 50,000 surface acres that Murray covers just west of Columbia. Up to 14 miles wide in points and stretching 41 miles from east to west, Murray is known as one of the best all-around reservoirs in South Carolina.

But March on Lake Murray is special for bass fisherman.

“During the fall, there is a lot of ground to cover looking for largemouth bass. I have spots that have been good to me,” said Howard Stephens of Columbia, who has had plenty of success fishing local tournaments on Murray. “I can go to so many places to see if largemouth are biting. There are hundreds of waypoints on my GPS.

“All I need are some casts to know if the fish are there.”

In the spring, it is a different story.

“In the spring, they are in shallow water, and in most places it’s almost like sight-fishing,” Stephens said. “You don’t need to cast to see if the bass are there; a lot of times you can see them.”

What’s driving the fish in close is the spawn. As the water begins to warm in the spring, bass behavior changes. Prespawn behavior starts somewhere between the Superbowl and the start of baseball season. The air is still chilly, but the water has started to warm.

It’s a time you might skip if you believe the old motto that says, “Don’t fish when you need a jacket, and never hunt when you don’t.”

“The bass are starting to move closer to shore and are more active,” said Charles Dooley, owner of Dooley’s Sports Shop in Lexington, a fixture on the lake since the 1950s. “A lot of guys are using crankbaits, then move to artificial worms and shaky heads on a Carolina rig to catch them in the prespawn. Those work well because the fish are aggressive, getting ready to nest.”

Hal Beard, a biologist with the S.C. Department of Natural Resources, related bass behavior this time of year to something deer hunters are familiar with.

“The female fish are aggressive, looking for mates and feeding,” said Beard. “They will give you a little more of an opportunity to catch them; a good analogy might be bucks during the rut.”

But unlike deer hunting, it is usually the male fish that make their presence known first.

“The little bucks come in to the nests first and do their thing,” said Dooley. “The females will follow, and that’s when you see some fish of good size.

“When all that happens depends a lot on the weather, but I think we’ve seen more of the bigger fish later in March and going into April.

And with new rules instituted by SCDNR, targeting bigger fish is more important. Beginning this year, bass will be managed with a 14-inch minimum-size limit. Dooley said size limits seem to have worked on the Santee Cooper lakes, and fisherman hope that they can return the lake back to the days when it was considered a trophy fishery.

When water temperatures climbs into the upper 50s and lower 60s, the bigger fish start to arrive. Dooley recommended fishing on the lake’s main section.

“I tell guys that ask to focus in the middle of the lake in March – from the dam to the rivers,” Dooley said. “Bomb Island and Shell Island waters seem to warm up pretty quick, and there is usually a lot of activity there, but sometimes the beginning of March can be a little early for those spots, depending on the weather.”

Bomb Island goes by at least three names, including Dolittle Island and Lunch Island, and it is best known for its roost of purple martins in late July. But in March, the 12-acre island will be a roost to bass fisherman.

Lee recommended hitting the northern section of the same mid-lake area early in the month.

“The northern end tends to warm up the fastest,” Lee said. “I like the pockets in the creeks; places like Beards Creek, Bear Creek and Crystal Lake are good spots.”

The southern side takes a little longer to warm up, but it gets going in March, too. Lee recommended focusing on the area around the gap — that section of the lake where the rivers and the lake meet.

At this point. fisherman are likely to head out armed with creature baits like Zoom’s Brush Hog or soft-plastic lizards fished on Carolina rigs. Lee also recommended fishing a spinnerbait around brush along the shorelines.

Experienced fisherman will tell you lure selection means a lot, as does technique, but the key to good fishing is understanding the fish’s behavior. The behavior of male and female bass is very different. Male fish are on high alert during the spawn.

“The fish just get a little more spooked,” Dooley said. “You can’t just run your trolling motor right up to them.”

And spooking the fish can be a big problem — especially for the male bass.

Once spooked, the male fish might be gone for good, but a spooked female is not likely going too far.

“The little bucks might run off if you spook them on the nest,” said Dooley. “But the female fish will come back around shortly if you give them a little time.”

Once bass are on their nests, they have some curious habits that can test the fisherman who aren’t patient enough. Often, fish are less interested in eating a bait as in just moving the bait away. Often, a fish pushing a bait away can be mistaken for a bite. An impatient fisherman will set the hook, come up empty and spook the fish.

Bass fishing on Lake Murray requires versatility because important factors affecting bass behavior are constantly changing, but that’s what bass fisherman love about the sport and the lake.

“Lake Murray has so many options for bass fishing and fishing in general,” said Stephens. “That’s why so many of us love fishing out here. And for the same reason, that is why I love to bass fish. You need to be versatile. That’s the challenge with bass fishing.

“You’re not likely just to rig up your line and head out on the lake and catch something. You’ve got to understand how the fish behave, and then change where you’re fishing and your technique to catch them. It can be a challenge.” 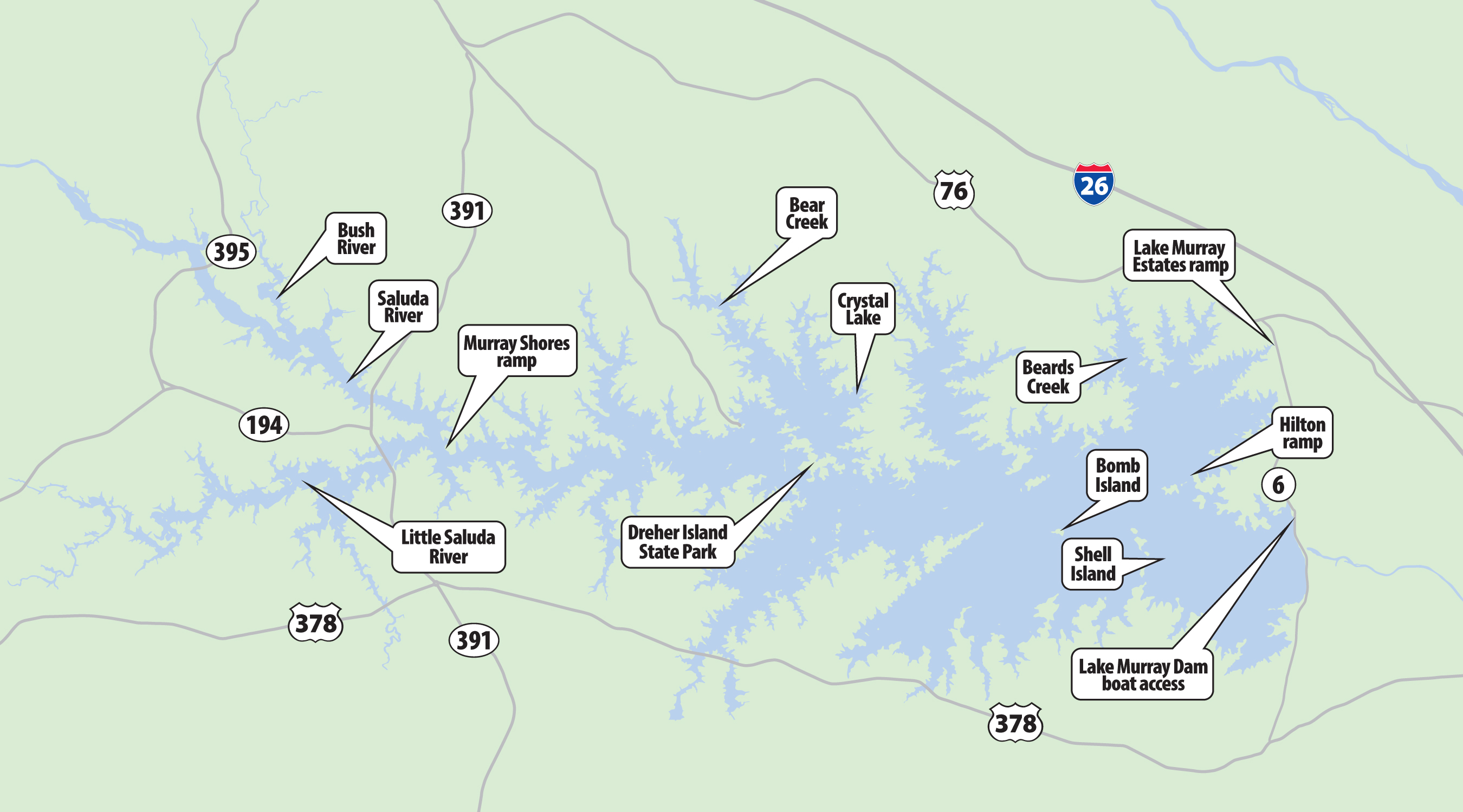 WHEN TO GO/HOW TO GET THERE: March is a great month to fish areas on the mid-lake section of Lake Murray, around Beards and Bear creeks and Crystal Lake. As the water warms later inthe month, move to the lower end of the lake and around Bomb and Shell islands. The public ramp at Lake Murray Dam in Lexington offers great access to the lower end of the lake. Other public ramps include (In Lexington County) Hilton, Larry Koon, Rocky Point; (in Newberry County) Billy Dreher Island, Kempsons Bridge, Sunset Recreation Area; (In Saluda County) Lake Murray Estates, Murray Shores and River Bend. For locations, visit www.dnr.sc.gov. The daily creel limit is five bass, with a 14-inch size minimum.

TECHNIQUES: Bass can be in transition between prespawn and spawning patterns across the entire lake through March. Fish spinnerbaits and Carolina rigs for prespawn fish on points and around brushy shorelines. For spawning fish, go with a soft-plastic bait, with creature baits and lizards usually productive.