It gets cold in January, sometimes bitterly cold. But mild weather in the Carolinas means it’s warm enough for bass to put on their feed bags when the opportunity presents itself.

Basically, you can’t plan ahead too many days. If you’re going fishing, you want to decide at the last minute after you see what the weather is going to be.

If you get a few warm days, fishing can usually be pretty good. Fish will be up in the creeks if the weather stays warm. That happens every few years, but mostly, you’ll be fishing around the mouth of creeks and the main lake. You probably want to be in places where you’re sitting in 20 to 25 feet of water, casting to the bank.

Warm days will cause the shad to move up out of deep water. Fish the mouth of creeks first, then move into the creeks a little. Riprap and bridge pilings are probably the best structure for holding bass, because the rock and the concrete will absorb a lot of the heat and the surrounding water will be a degree or two warmer, which means a lot.

January used to be when we planted our brush piles and went out on the lakes that were drawn down and found structure: brush that other fishermen had put out. Now, our electronics are so good, you find it with your Lowrance unit.

You need to be throwing a moving bait in January. I want to be throwing one of three Berkley baits: a Frittside 5, a Cutter jerkbait and a Bad Shad No. 8. It’s a good time to be cranking or jerking a bait down and letting it suspend, then move it, then stop it, then bring it back slowly.

If you catch a warming trend, those bass will move up. They could be in 2 or 3 feet of water. That’s what’s been going on when all of those January tournaments were being won on a Frittside the past couple of years. Run into fish that are moving up, and you can catch them on that Frittside 5.

You want to find a combination of things: fish anywhere that a channel is running close to the bank where you can sit deep and throw shallow, find some rock and find clear water.

You need to stick with rock; that’s your No. 1 structure when it’s cold.

You’ve gotta be fishing clear water; don’t fish dirty water. That’s pretty dang important. Fish aren’t going to be real aggressive anyway, and they won’t bite if they don’t see the bait. You aren’t going to get any bites because a bass can “feel” a bait coming.

Watch water temperature, but don’t rely on it; don’t let it throw you for a curve. I won a tournament one time when the water temperature was 47 degrees. But you need to be fishing areas where fish are active. You can be around the most fish in the lake and not catch any.

I remember fishing one tournament on Lake Wylie in January. It was so cold. The best water temperature we could find was 45, so we went up in the Hot Hole in the South Fork. In there, the water was 52 to 53, but the water had a lot of color, and we didn’t catch a thing. We went back to fishing deep banks and points in clear water and caught fish.

I’ve always been successful in January throwing moving baits. But the colder it is, the slower you have to make your retrieve. You really need to wind it so slow. Fifty is the magic number; if the water temperature is 50 degrees, you can fish with a more normal retrieve. If it’s lower than 50, you’ve gotta slow down. When you fish a Cutter jerkbait — Hank Cherry, the Bassmaster Classic champion, is designing a new one for Berkley — you need to pause longer between jerks. When you’re fishing a Bad Shad or a Frittside, you need to wind it very slowly. Shad colors are going to be the best. 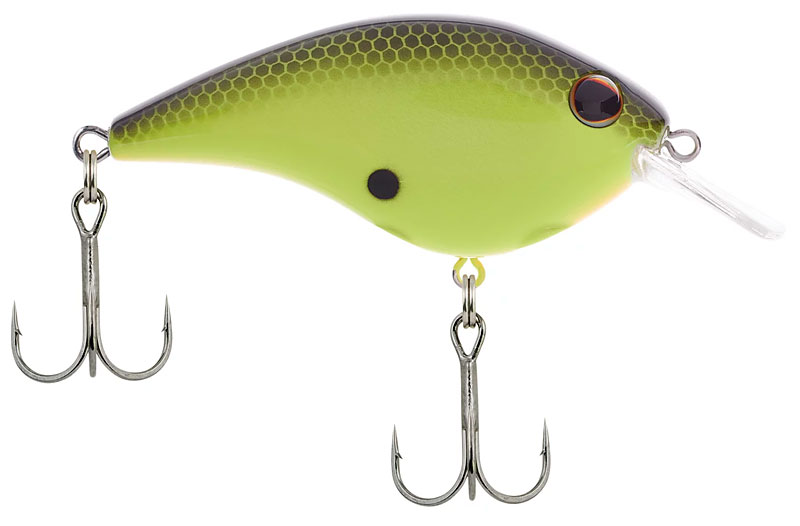 One thing you can do to help fish the bait slowly is fish a baitcasting reel with the slowest retrieve ratio you can find. I like the Lew’s BB1 Pro, which is a 5.8-to-1 retrieve. You bring in 23 inches of line on one turn of the reel. So you’ve already slowed down some just by winding that reel instead of a faster one.

The sunshine can affect the bite. If the rocks absorb the sun and get the surrounding water a little warmer, fish the sunny side. The fish won’t all move over there, but the ones that are already there will be more aggressive. The other thing is, sometimes, you’ve got to trigger them into biting. You might have to make multiple casts to one rock or bridge piling, when you’d only make one cast in warmer water.

You can do plenty of things to make a January bass-fishing trip worthwhile. After all, you can put in and find only so many brush piles in a day. You’ve got to wet a line sometime.

Don’t wait for spring to fish for slabs; Santee crappie will bite in January, too. […]

SCDNR fisheries biologists are getting ready for flounder stocking, but it’s a long term program with no immediate results. […]

About David Fritts 113 Articles
David Fritts is a 61-year-old pro bass fisherman from Lexington, N.C. He won the 1993 Bassmasters Classic champion and the 1997 FLW Tour Championship, and he was the 1994 BASS Angler of the Year. He is sponsored by Ranger boats, Evinrude outboards, Lew’s, Minnkota,and Berkley.