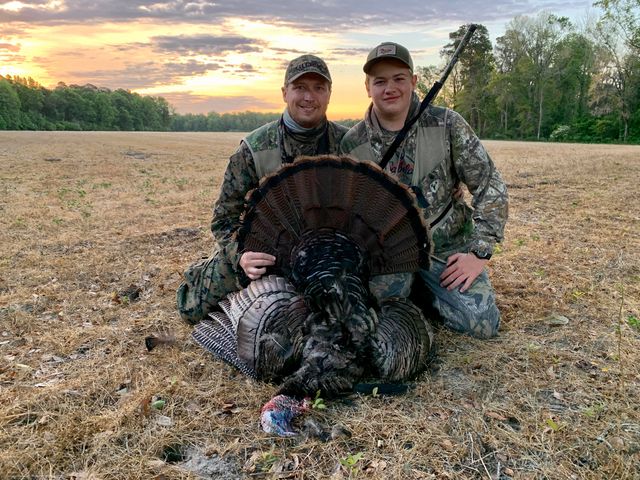 Thirteen-year-old Luke Mixson of Lodge, S.C. killed a 23-pound, 5-bearded gobbler in Colleton County on Friday, April 30. It was quite a trophy for the young hunter.

“We were invited by a dear friend to try on the last morning of turkey season (for Game Zones 3 and 4), and thankfully we did,” said DM Mixson, the young hunter’s dad.

“We set up in a little tree line adjacent to a large field. And within 10 minutes of getting there, a gobbler fired up about 150 yards from us in the woods,” he said.

They quickly set up two decoys in front of Luke, then prepared to wait. But things happened too quickly after that for any waiting to take place. In just a few minutes, three jakes and a hen came out of the woods and began walking around.

“Shortly after that, we spotted the big gobbler step out of the wood line about 150 yards away. He walked around for a few minutes. Then he spotted the decoys, and it was on. He was gobbling his head off. He came running,” he said.

Luke pulled the trigger on the big gobbler at 15 yards and killed it. It’s the second turkey he’s ever killed. Of the five beards, the longest was 11 inches in length. It sported 3/4-inch spurs.

A new addition has been added to the Edisto Reef. The structure is made up of a wide mix of components, including a shark sculpture. […]

Nine-year-old Kolton Paschal killed a Guilford County 9-point buck while hunting with his crossbow during an evening hunt with his dad. […]

About Brian Cope 1997 Articles
Brian Cope is the editor of CarolinaSportsman.com. He has won numerous awards for his writing, photography, and videography. He is a retired Air Force combat communications technician, and has a B.A. in English Literature from the University of South Carolina. You can reach him at brianc@sportsmannetwork.com.
Website