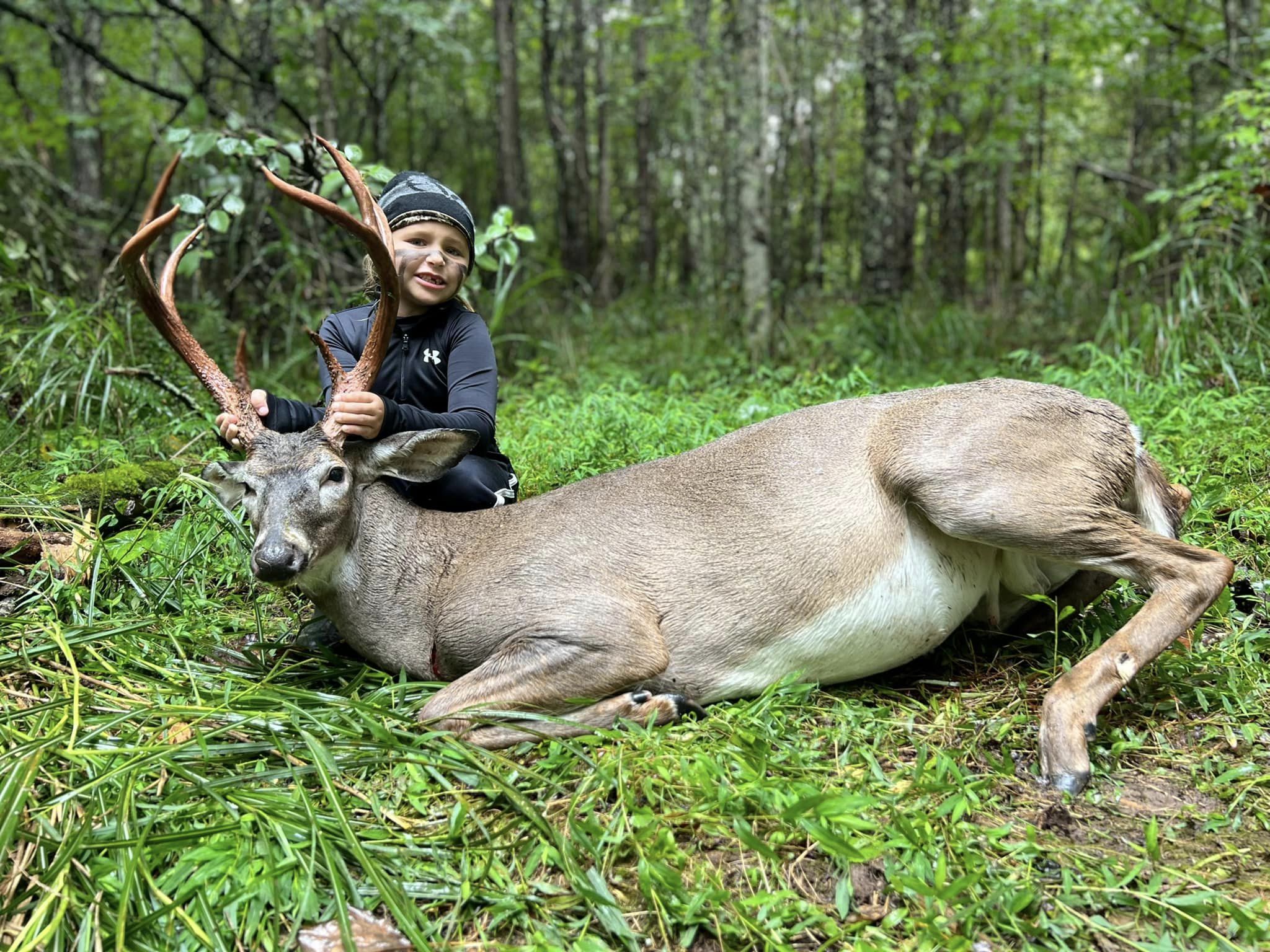 Brooklyn Rice of Mars Hill, N.C. killed a tall-rack trophy buck in Madison County on Sept. 10, 2022 while hunting with her dad. She shot the 8-point buck with a Ravin R10 crossbow from 27 yards away not long after settling into the stand at 7 a.m.

Rice and her dad were hunting from a ground blind facing a small open area when the buck appeared. It was a buck they were familiar with from 3 years of trail camera photos. When Rice pulled the trigger, the buck ran 60 yards before expiring. And it didn’t look as if they would even be hunting that day.

Her dad shares the story here:

This hunt wasn’t supposed to happen. Our crossbow was in the shop due to broken cams. But a great friend came through, letting us borrow his Ravin R10 as he was going to be at the beach opening day. We have been watching this deer for years with his unique, tall tight rack. We first saw him in 2020 as a 2 1/2-year-old 7-point.

We saw him again last year as an 11-point, then this year he didn’t add back his kickers. But his tall, tight rack made him easily recognizable. Brooklyn got her first deer last year from this same ground blind on youth day, and she was so excited about this season. This summer was so hectic, we hadn’t been running trail cameras like we usually do. We freshened up batteries in all the cameras on Labor Day. What pics we did have were few, but a few of those were of this buck. We’d also seen him in person around the property over the summer.

Friday (Sept. 9) evening came around and we were hoping the rain would hold off. But either way Brooklyn a/k/a Little Bear was determined to be in the woods and put some meat on the ground. She had her fingers crossed that he would show up.

We got in the stand a little late — right at 7 a.m., got settled in, crossbow loaded and seated in position, faces painted. We gave each other knuckles saying good luck, then got quiet. I pulled my phone out to do what else but take a selfie of us. I looked back up and there he stands with another 6-pointer at 30 yards.

He headed to grab an apple and slowly and methodically worked his way from right to left. We got the crossbow ready. The deer worked perfectly broadside, so of course the “mehh” was executed to stop the buck. As Little Bear squeezed the trigger, she said “nothing is happening,” and the buck decided he did not like what was going on. He trotted back up the hill 20 yards, then stopped looking around. He decided everything was ok a few moments later and returned to grab an apple.

We realized we did not have the arrow fully pushed back into position, so we regrouped and the buck worked back into the opening, standing facing directly away from us for what felt like an eternity, but was in reality maybe 2 minutes. He finally took a step to his right, quartering away perfectly to let her slide an arrow in right behind the last rib, exiting out in front of the opposite shoulder. The buck took off running, front end struggling to keep up.

Finally the adrenaline, the excitement all set in at once, and it was hugs, high fives and smiles for the rest of the day.

Congratulations to Brooklyn, who is now entered in our Bag-A-Buck Contest and in the running for these monthly prizes and the Grand Prize package:

Youth hunter Banks Carter had a big day at Donnelley WMA for South Carolina’s opening day of the 2022 dove season. […]