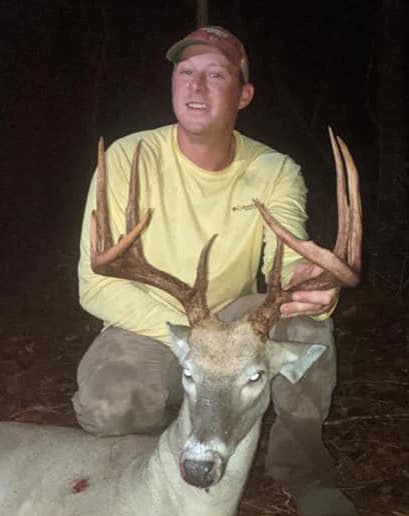 Josh Hooks of Zebulon, N.C. killed a big 10-point buck in Wake County on Sept. 18 after an epic few days of bull red drum fishing along the coast. The buck has been gross green-scored at 147 inches.

“I was so tired and sore from reeling in fish, my arms felt like rubber,” said Hooks.

He was hunting property adjacent to a 2000-acre section of inaccessible private land that’s a de facto deer sanctuary.

“Our land is only eight acres. But it’s a peninsula of woods surrounded on three sides by a creek that backs up to the big section of untouched land,” he said. “It’s basically landlocked, and you have to go through a gate to enter. The land around is off-limits. So altogether, it’s a large section of undisturbed woods.”

The only problem, he said, is when bucks reach 3 1/2 years of age, they disappear from the peninsula.

“They get smarter and move to the bigger piece of land. So they’re harder to hunt,” he said.

But Hooks has roamed the area for years. And this fall, he attracted and anchored deer with corn and a special deer mineral compound called Real World Maximizer Deer Mineral. He said the minerals boosted the weights of individual deer, including the buck he arrowed.

“I started feeding at the beginning of July,” he said. “But I couldn’t check my trail camera while I was at Oriental (fishing). The Tuesday before I left, I put out several bags of corn and minerals.”

Once he returned from the fishing trip, he checked his trail cameras and put out more corn.

Hooks sat in the stand for two uneventful hours with his Elite Judge compound bow and carbon arrows tipped with 100-grain fixed-blade Slick Trick broadheads. Then the flood gates opened.

“It was crazy,” Hooks said. “Every 4 or 5 minutes, a guy sighting in a rifle at a road would shoot. I thought he was going to ruin my chances. But at 6 o’clock, deer started coming out. It was like a parade.”

At 6 p.m., only a 4-pointer and a spike buck were in shooting range. Then nine other deer popped into view.

“Then the big deer waked in from a different direction and stopped at 23 yards,” Hooks said. “He was a loner.”

The hunter put his bow’s sight pin on the deer’s shoulder. He released an arrow which passed through the buck.

He found blood at the corn pile. But when tracking the deer, he found none. Luckily, after an 80-yard walk, he found the expired buck. Hooks also discovered a 4-inch long section of body fat extending from the arrow’s exit wound. It had blocked the blood flow.

His biggest buck before this one measured 124 7/8 inches.

“So this was definitely my best deer,” he said.

Congratulations to Hooks, who is now entered in our Bag-A-Buck contest. Click here to enter your buck in the Carolina Sportsman Bag-A-Buck contest. We’re giving away some great monthly prizes, as well as a Grand Prize that includes a Millennium M25 hang-on deer stand and a 2-man, 2-day hunt for deer and hogs at Cherokee Run Hunting Lodge in Chesterfield, S.C.

taylorl1984 Bag a Buck, Deer of the Year

Kris Oakley scored this giant 14-point beast on opening day of muzzleloader season out of Caswell County, N.C. What a way to start the season! […]