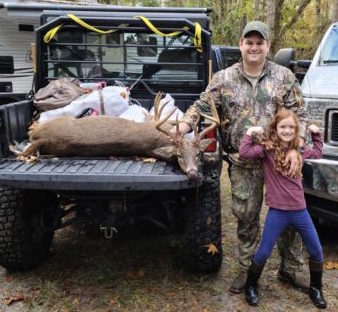 My name is Kenny from Palm Bay Florida, and I have been hunting South Carolina for 18 years. I took my 7 year old daughter on our first “Father-Daughter” hunt a few weeks ago to introduce her to hunting and set up a box stand we built together over the summer. We went to one of our other stands later that night and bagged a nice 9 point. I promised her if she behaved we would come back in two weeks to hunt “her stand” once the woods had settled.

We drove back up Thanksgiving night from our home in Palm Bay, Florida, to our family Lease in Hampton County. First thing Friday morning, 11/26/21, we went out in the rain to sit in the new stand. After the rain stopped, we watched a couple doe come and go then caught a glimpse of a doe behind us in the mirror. We turned to look back but she was already gone, so we settled back down in our seats to continue hunting. As soon as we did, we looked back at the mirror and caught a glimpse of a massive set of antlers coming out to where the doe had been.

I told my Daughter it was definitely a shooter and that I was going to take the shot as soon as I turned. She put her headphones on and I made a quick turn to shoot. After the shot we heard him crash through the woods and knew he was down. A while later with help from some family we were able to locate the buck and realized then just how big he was. Needless to say, after two nine points in a row, she is officially hooked already asking to go back for another hunt.

Javan Wilkinson of Dallas, N.C. killed a Gaston County 9-pointer on Dec. 12. The buck had a a massive drop-tine on one side of its rack.  […]