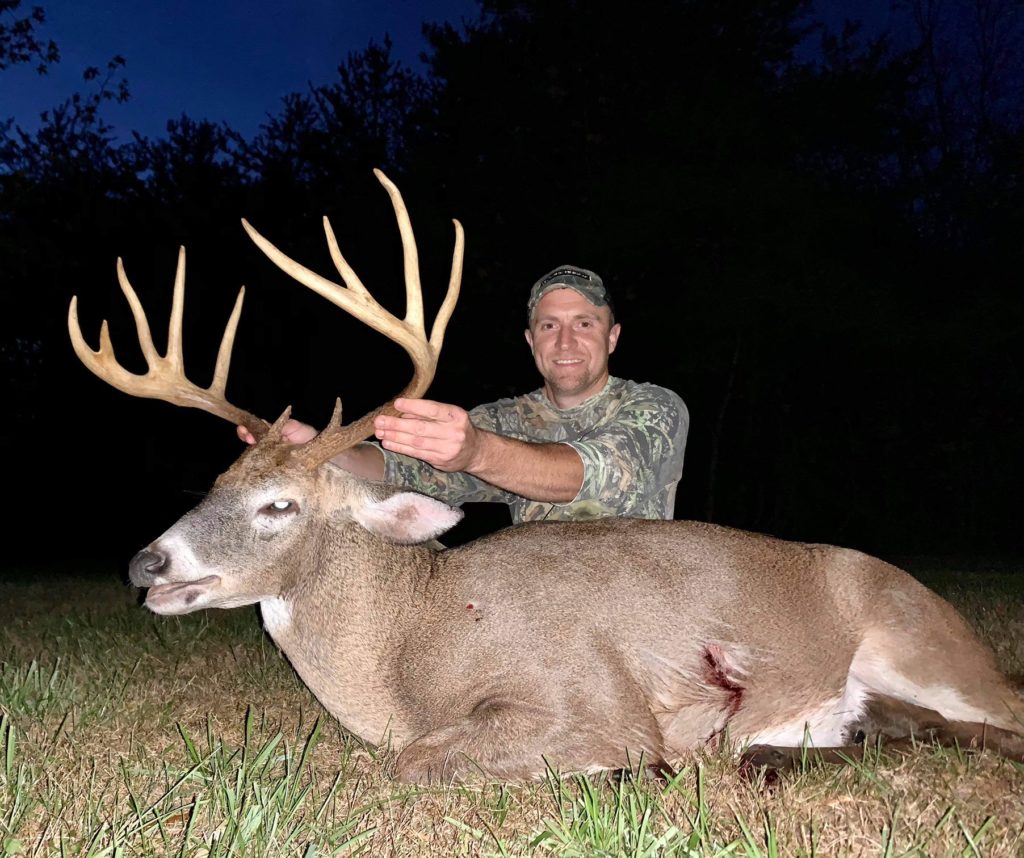 RJ Seiler of Stokesdale, N.C. encountered “Towers,” one of the biggest bucks he has ever seen, on Nov. 5. The 11-point giant buck was strutting toward his Alamance County corn pile. And it was only 50 yards away. With no time to reach for his shooting stick, Seiler freehanded a shot with his blackpowder rifle, killing the enormous buck.

Seiler isn’t new to hunting, or to killing big bucks. And he does it with every legal type of weapon. In September, he arrowed a 142-inch buck, but this one from Nov. 5, which has been green-scored at 146 inches, surpassed that archery kill.

This past August, “Towers” showed up on his sister and brother-in-law’s 30-acre farm in Alamance County. Seiler took an interest in the buck.

“Towers is a tall-racked, 6×5 buck with exceptionally long tines and beams,” Seiler said. “He looked like a toad from the trail cam pics.”

During bow season, Seiler hunted the buck religiously, hoping for an encounter. And he almost got a chance to connect.

“He came in following two does and grunting every step. He stopped 20 yards from me. But he didn’t give me a shot due to some brush in the way. So I had to watch him walk off with the does,” he said.

But the deer kept coming into his stand like clockwork. So Seiler knew he would get another chance at the deer if he kept at it. He was off work the morning of Nov. 5, and the wind forecast was perfect for hunting the stand frequented by the 11-point giant buck.

He got in the stand before daybreak and saw action almost immediately. Small bucks and does were coming and going at will. With all the activity, Seiler knew the big buck could show up at any minute.

Around 8:30 a.m., a small doe and buck flushed quickly off the corn pile. The giant deer had arrived. Seiler was excited but ready.

“I had my steady stick with me in the tree. But I got so excited when I saw him, I never thought to grab it. I shot him offhand with my T/C Encore .50 caliber muzzleloader,” he said.

The deer ran out of sight immediately, showing signs he was hurt. Seiler felt like he’d made a good shot. But his heart sank when he got down to check for blood.

“I got down and found real dark blood with stomach contents on the ground,” he said.

The shot, he realized, was farther back than planned. He knew he may need some help recovering this deer. He called Jeff Annis with Low-to-Ground Deer Recovery, who put his dog Cooper to work. After a 500-yard tracking job, Cooper located the deer, which required a second shot to finish the job.

“I was sure glad we found him, and I’m not sure I could have found him without Cooper. He led us right to him,” he said. “The deer has 24-inch beams. He’s definitely one of the nicest bucks I have ever taken in North Carolina.”

Congratulations to Seiler, who is now entered in our Bag-A-Buck contest, making him eligible for a number of great prizes, including the grand prize which includes a two-day, two-man hunt at Cherokee Run Hunting Lodge. Click here to view the Bag-A-Buck gallery or to enter the contest yourself.

About Jeff Burleson 1290 Articles
Jeff Burleson is a native of Lumberton, N.C., who lives in Myrtle Beach, S.C. He graduated from N.C. State University with a degree in fisheries and wildlife sciences and is a certified biologist and professional forester for Southern Palmetto Environmental Consulting.