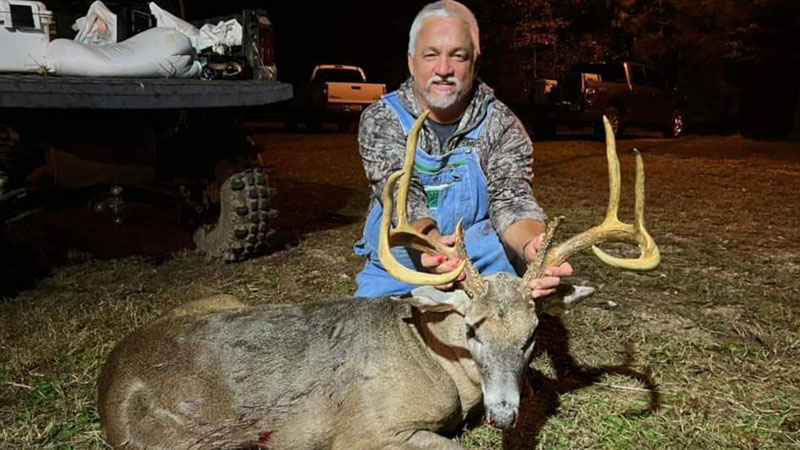 8-point buck was chasing a doe

Owner of J.C.’s Outdoors, Chris Veronee bagged an incredible 8-point just a few days ago in Edgefield county! Veronee was on a family hunting trip on one of his properties in Edgefield, S.C.

Pretty much like every trip, nobody could decide what stand they were going to sit in. After everyone picked stands, he decided to grab his 7mm-08 which he calls his farm gun and headed to one of his Sad Daddy box blinds that hadn’t been hunted much. Once he arrived and was getting set up he heard what he thought was a deer not far out in front of him.

Once things settled down, a spike walked out and began eating. Not long after that a small doe entered the food plot. Veronee knew the rut was on in S.C. so he waited with high hopes that a buck would be with the doe. To his surprise, a big buck ran out into the food plot near the doe and both ran into the thick pines.

It didn’t take long for him to show himself and the buck gave Veronee a broadside shot. The buck bolted into one of the thickest briar patches on the property. Once family and friends arrived the recovery began. The buck ended up running approximately 50 yards and crashed.

Veronee, a hunter who has killed some monster bucks in other states knew this buck was special. “I have a place in Kansas and I’ve come home with bucks nowhere as big as this one. An 8-point of this caliber is big in any state.”

Veronee estimates this buck will gross around 140 inches, which is a true stud here in South Carolina.

Buck, with Carolina Crazy Outdoors YouTube caught up with Veronee and talked about this hunt. Both hunters agree, cameras are a great tool but you need to be in the woods now. The rut is on and you never know what’s going to show up on your property.

SCDNR finds missing hunter in distress thanks to phone technology

SCDNR used phone technology to locate a missing hunter in distress on New Year’s Day, leading to the man’s rescue. […]

Partially submerged trees are the key to catching winter catfish on the Wateree River. […]