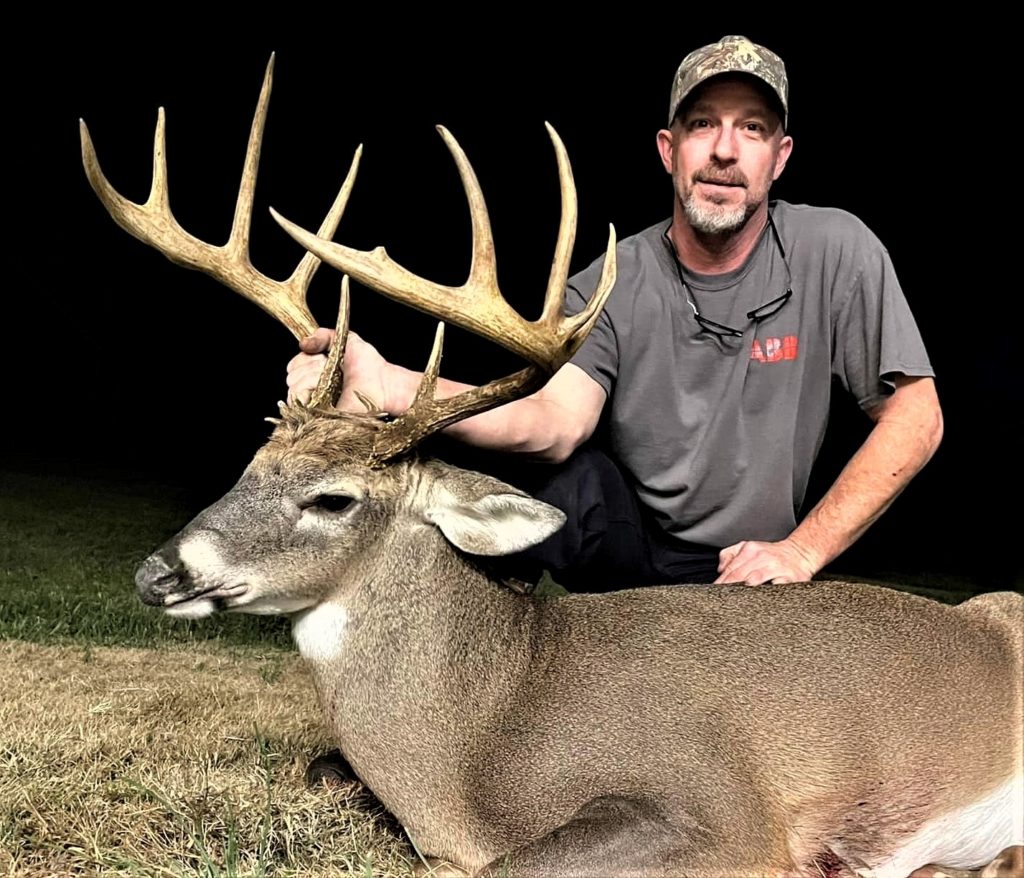 Joe Hall of Mebane, N.C. proved that location rather than property size is the key to finding a trophy buck when he killed a non-typical brute that green-scored 152 inches on Nov. 17 in Alamance County.

“I was in a 10-year-old ground blind that was weathered and standing out in the open. It was so old it was falling down, which is why it matched so well deer don’t pay attention to it,” he said.

It was a buck Hall had not seen before, and none of his trail cameras had recorded photos of the deer. But with the Piedmont mating season at its peak, plenty of does were walking through his parcel of hunting property. It was the perfect spot to ambush a buck — a funnel between several large farms that connects to a cutover that served as a bedding area.

“There are 100- to 250-acre farms that rotate crops of soybeans and corn. And part of my land is a pinch point between them,” he said.

He’d upped the ante, hunting the ancient blind at the edge of a field where he’d put corn 80 to 100 yards away.

“I’ve got people hunting all around me. But my property doesn’t look that attractive. All I’ve got is 25 acres that’s mostly in a funnel. And the deer use the funnel to get to fields and a cutover bedding area,” he said.

One reason he located the blind — where 3 years ago he shot a 148-inch buck — is no one else can enter the property unless the wind is right.

“I’m always aware of the wind. I can’t hunt the blind unless the wind’s blowing from a certain direction. I also don’t want to alert does to my presence. So that’s another reason I watch the wind,” he said. “I’ve learned a long time ago, if a doe smells you, she’s on you for the rest of the season.”

Hall said he’s also learned that in Alamance County, you won’t kill a big buck at a corn pile unless he’s with a doe.

The day Hall dropped the big buck, he had only been in the stand for 10 minutes. He eased into his blind at 4:30 p.m. And he saw activity right away.

“First there came a doe. Then she left and came back with two fawns,” he said. “Then the buck came out.”

The deer was 80 yards away from Hall when he leveled the crosshairs behind its right shoulder and pulled the trigger.

The buck ran about 30 yards before Hall saw it go down. The deer’s rack had an inside spread of 17 inches.

Shoot any round through any firearm with subcaliber adapters