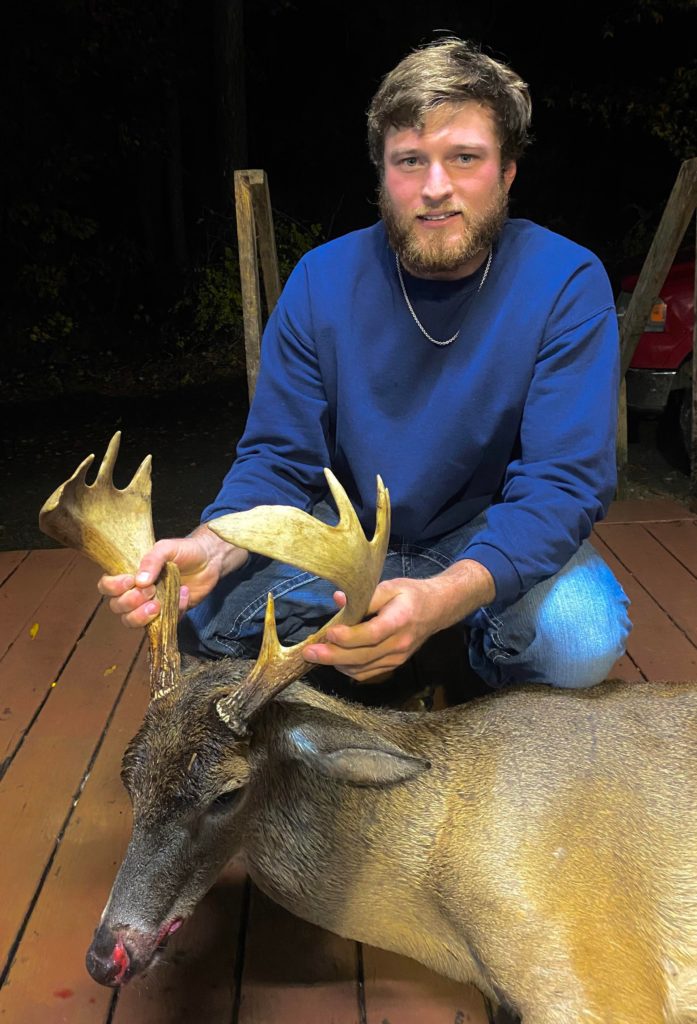 Jett Sutton of Ruby, SC was hunting in Chesterfield County on Oct. 31, 2022 when he killed a 10-point buck with a very unique rack. The heavily palmated headgear resembles that of a moose much more so than a whitetail deer.

It was Sutton’s first time seeing the deer, and his trail cams had never captured a photo of the buck. He shot it with a .30-06 from 80 yards away while in a climbing stand overlooking a swamp. The deer dropped on the spot.

Although he’d never laid eyes on the buck before, something told him he should hunt that area.

“I found a new scrape that I’ve not seen before. So I decided to throw a climber on the tree and hunt it for the afternoon,” he said.

Not long after climbing the tree, he saw a cowhorn. He passed on it, hoping something bigger would show up. As daylight began waning, he saw another deer appear and decided to shoot it.

“As it was getting dusk dark, this deer walked out and I decided to take a chance with him. I pulled up and shot. He dropped like a rock,” he said.

At this point, Sutton still didn’t realize just how unique the 10-point buck was.

“As I walked up to him, I couldn’t tell what I’d shot or what he was. When I realized what he looked like, I was beyond excited and very thankful for that once-in-a-lifetime deer,” he said.

Congratulations to Sutton, who is now entered in our Bag-A-Buck Contest and in the running for these monthly prizes and the Grand Prize package:

codyhager11 Bag a Buck, Deer of the Year, Newsletters

It all came together for Cody Hager at 4:45 on the Nov. 16 when this big buck came cruising through. The 9-pointer is his biggest yet. […]