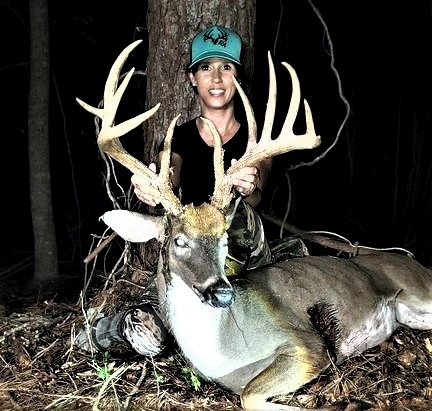 Hunting from a ground blind with husband Kevin Morris, Morris saw the whitetail several times during 2020 but passed up shot chances.

“Last year my husband and son hunted from a small (8 acres) place, and I watched a nice 10-pointer I nicknamed ‘Tiny Ten’ and an eight-point buck during bow season,” she said. “But he left during the winter. All I could do was hope he’d make it through (gun season).

“My husband pulled trail-camera cards late in 2020. And we saw (Tiny Ten’s image). So we knew he’d survived. I hoped I’d get another chance at him this year.”

At 4 p.m. that day, Morris and her husband walked to a blind he’d built that overlooked a clover field where they’d scattered shelled corn.

“We had lots of TactaCam (wireless) photos of deer in the field,” said the Central Carolina Archery Association competition archer. “(The blind) was at the edge of some woods, and deer usually came out to our left.”

After a two-hour wait, two small bucks and a doe filtered into the field.

“Then a bunch of bucks walked in,” Morris said. “At 7:15 p.m., Kevin saw a deer with a nice rack in the woods. From inside the blind I couldn’t see him until he walked out at the back of the clover field. It was Tiny Ten. He looked around for a while then walked to the corn.”

When the buck stopped broadside to eat at 20 yards, Morris aimed through a scope atop her Mission Sub-1 crossbow and started to squeeze the trigger. But a doe walked in the line of fire.

“I had to wait again, and my heart was thumping,” she said. “It seemed like forever, then she moved. So I aimed behind his left shoulder and let fly (a Black Eagle bolt tipped with a RamCat broadhead).”

The buck jumped and ran back toward the woods. Morris wasn’t sure she’d made a good shot. So the husband and wife waited to give the buck time to expire. During that pause, they reviewed the video.

“The shot looked good. So we packed up our things and walked to our truck,” Morris said.

When they returned the pair saw no signs of a hit, except for a long paw mark. They followed the buck’s likely path to the woods and 20 yards inside. But they lost the trail.

Brought to the scene, the tiny tracker followed the buck’s scent about 70 yards into the woods and found the collapsed whitetail.

“(The deer) must have died while running because he fell on his right side, skidded and dug his rack under a tree root,” Morris said.

The huntress said she plans to take Tiny Ten to the 2022 Dixie Deer Classic in Raleigh.

Congratulations to Morris, who is now entered in our Bag-A-Buck contest. Click here to enter your buck in the Carolina Sportsman Bag-A-Buck contest. We’re giving away some great monthly prizes, as well as a Grand Prize that includes a Millennium M25 hang-on deer stand and a 2-man, 2-day hunt for deer and hogs at Cherokee Run Hunting Lodge in Chesterfield, S.C.