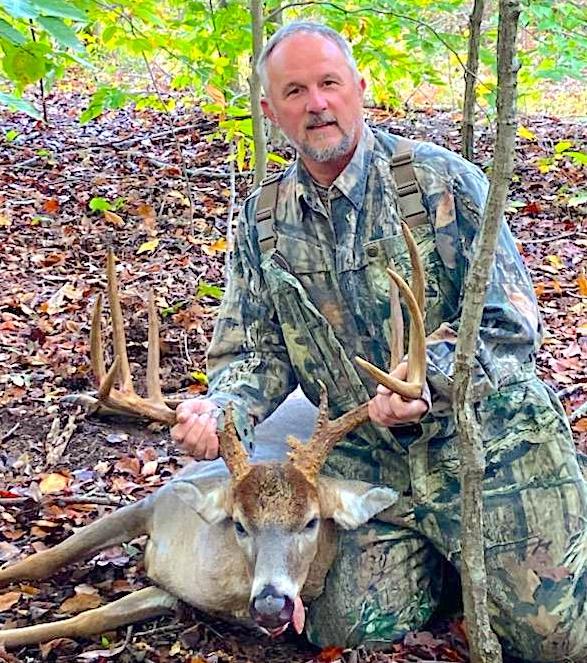 Dwayne Bryant of Madison, N.C. killed an 11-point brute in Rockingham County on Oct. 30, 2021 at 8:20 a.m. It was the opening day of blackpowder season, and Bryant used a Savage 110 smokeless muzzleloader to down the buck, which had a sticker off one brow tine, making it an 11-pointer.

A friend had invited Bryant to hunt his land, so he went in, put food plots down, and mounted his trail camera. Unfortunately, his computer crashed so it wasn’t until around Oct. 15 before he could look at the photos.

He said “I’m like ‘my goodness,’” when he saw the photos of the deer. He sent one photo to his friend Bud Long, who asked if he needed help coming to hunt the deer.

In one room of an old abandoned house, Bryant built a ground blind so he would have a good vantage point for hunting with a bow. A few days later, he set up his 18-foot ladder stand on a rainy day so his scent would get washed away. Then he hunted the deer twice with a bow, but didn’t encounter the buck in the flesh.

Before daylight on Oct. 30, Bryant was in his ladder stand waiting for the big buck. The sun came up to reveal a cold, but clear and sunny day. The hunter watched several does come out into the food plot. Two smaller bucks chased the does, then left. And a few minutes later, two more small bucks came out with a doe that crossed the food plot.

“Something just told me — a sixth sense like — ‘get your gun ready,’” he said.

About that time, he got a text from Long, asking if he’d shot the buck yet. Bryant picked up his phone and typed “not yet.” Before hitting send, he set the phone down, put the deer in his crosshairs and shot it.

He hit send on the first text, then texted Long again, “I just shot him.”

Bud replied, saying the deer will appear like a ghost.

“That’s about the way he did. He appeared like a ghost,” Bryant said. “One minute he was not there and then he was. Did he cross the food plot or come in out of the woods? I wasn’t sure; he just appeared,” he said.

Bryant shot the buck from about 140 yards away. He hit the deer, which was in a thick cutover, in the left side behind the shoulder. It was so thick he split a limb in two about 5 yards in front of it.

The buck was working a scrape line when he shot it. It ran about 30 yards, then fell.

Killing the buck was special for Bryant for more than one reason. January will be 3 years since he lost his dad. Deer hunting for 50 years, he said it was hard to hunt without him.

“My dad was my hunting mentor,” he said. “I was just sitting there thinking about him that morning. I felt like it was daddy telling me to get the gun ready. I feel like he was there. It makes the buck even more special,” he said.

About Wendy Schrantz 2 Articles
Wendy Schrantz is a freelance writer and photographer living in Cornelius, N.C. She is a graduate of the University of South Carolina and enjoys outdoor adventures with Josi, her beloved husky.