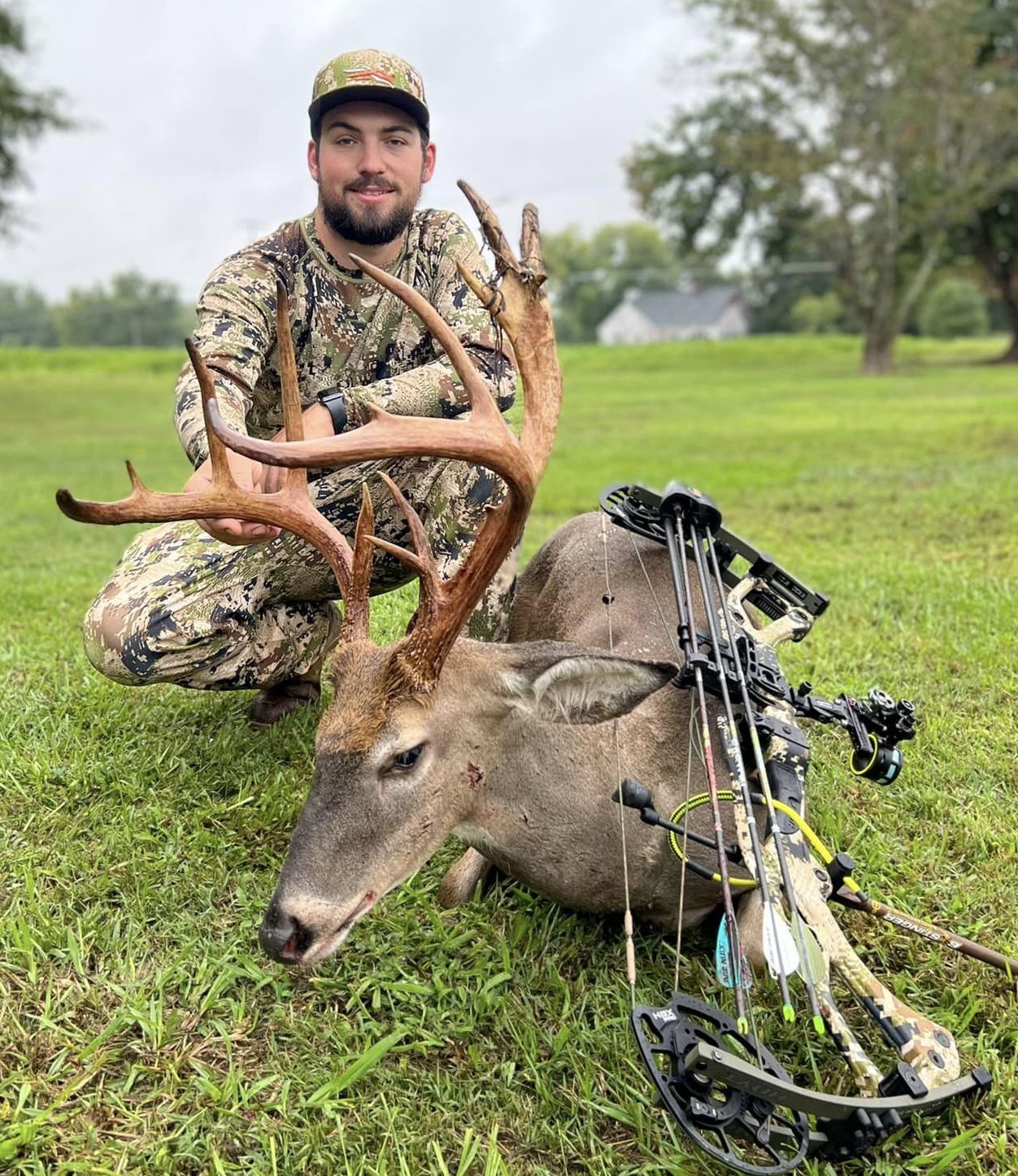 Hayden Wicker of Madison, N.C. in Rockingham County opened the 2022 archery season with his finest trophy, downing a non-typical buck that sported a 16-point rack, five typical points on the right side and palmated with 11 points on the left.

Most of central North Carolina was deluged by opening-day rain, but Wicker arrowed his buck at shooting light, before the torrential rains started.

“I can stand a little sprinkle (when hunting), but I wouldn’t have gone in a downpour,” he said.

The part-time worker for Boneyard Archery in Madison, which specializes in custom bow setups, had modified the sights of a Hoyt RX 7 Ultra compound bow. A single-post Axcel Landslyde slider sight and Spot Hogg double-up pin are attached to the riser.

It you think Wicker is dialed into having the best compound equipment, you’d be correct.

Wicker was 25 feet up a tree

That hunt will include lots of walking through rugged terrain, so knocking a scope out of line is a possibility. The Spot Hogg scope is field adjustable and can be re-zeroed in seconds if the Landslyde sight were to get hit.

Still, taking down a N.C. trophy buck was a large challenge, and Wicker had no qualms about using his elk bow.

“I’d only put out apples and two bags of corn,” he said of an area 18 to 25 yards from his Hawk aluminum ultra-light tree stand set 25 feet off the ground.

“When my trail cameras started getting pictures, the buck was always with a little three-point buck, no other deer,” Wicker said. “But they came out like clockwork for 2 months, same time each morning and evening. He’d stay a minimum of 35 minutes. He was comfortable at this spot.”

Wicker’s tree stand was perched in an oak tree flat that overlooked a pine-studded bedding area.

“I saw the three-point first, then I saw (the bigger buck) coming from 80 yards away,” he said.

Wicker had spread apples and corn in a long row, and the buck stopped to chew on an apple 24 yards from the hunter.

“He was quartering toward me,” Wicker said. “It wasn’t a super-hard angle.”

He put the 20-yard sight pin on the deer’s shoulder and touched the arrow release. The Easton Axis LongRange 505-grain shaft, including a Levi Morgan Series Swhacker 100-grain broadhead, passed through the deer’s body and exited at a rib.

Congratulations to Wicker, who is now entered in our Bag-A-Buck Contest and in the running for these monthly prizes and the Grand Prize package:

Check out this non-typical, 17-point buck killed by Natalie Swaney of Central, S.C! She killed this one in McCormick County. […]

nclifer01 Bag a Buck, Deer of the Year