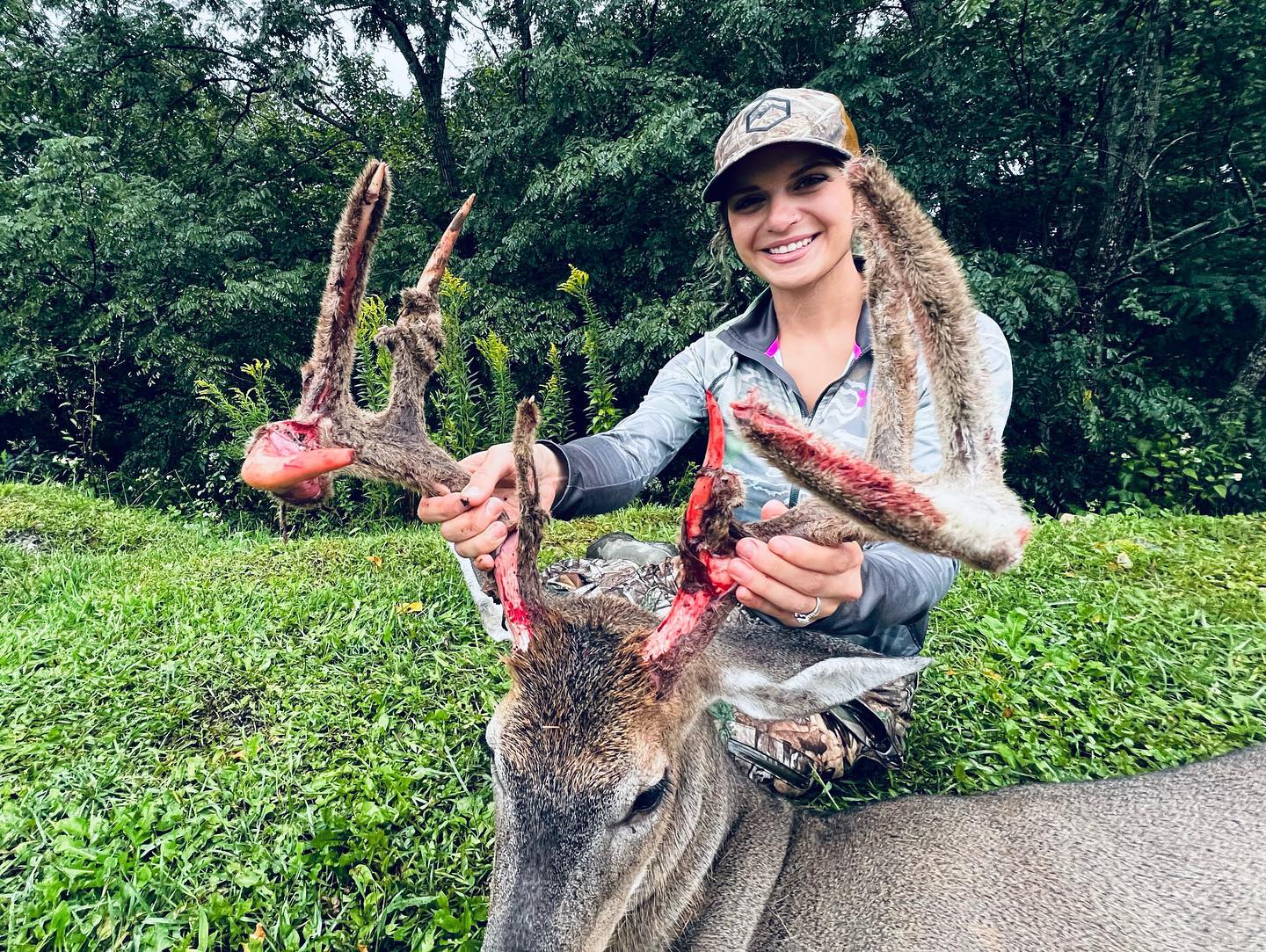 Mom’s day off was bad news for trophy 8-pointer

Ashley Ingraham of Newland, N.C. arrowed an in-velvet 8-point Avery County buck on Sept. 10, North Carolina’s opening day of the 2022 archery season. She estimated the weight of the buck at 190 pounds.

When the wife and mother of two small boys has some free time in the fall, she can often be found in the woods with a compound bow, waiting on a deer to appear.

“I have my places I hunt (alone), but Coty was above me in a tree stand holding a camera,” Ingraham said of her husband’s presence. “He filmed the entire hunt.”

People who know western N.C. topography understand its mountainous terrain and difficulty to hunt. Ingraham was in a single-person tree stand, with her husband above her in a tree saddle.

“We were on a ridge above an apple orchard,” she said.

They’d chosen the spot because a decent-rack buck had been appearing “hit or miss” for a few days at the area.

“We had lots of trail camera pictures of him last year,” she said.

Her husband had mixed shell corn and Big&J attractant meal on the ground near the stand tree. The buck appeared alone, although Ashley said the spot had been covered up in does since 2021.

The buck’s antler rack was three-fourths covered in velvet, but the right main beam of its 4×5 rack was bloodied where the deer had been rubbing it against trees.

She began preparing to take the shot and was standing, holding the Bowtech Carbon Rose compound at full draw. An Easton Axis arrow with a 275-grain Tuffhead fixed-blade broadhead sat on the arrow rest.

“I was at full draw and expecting to shoot at 20 yards. But the buck ran off about 10 yards,” she said.

Ingraham and her husband both wore Under Armour Realtree Xtra camouflage clothing, but no gloves or facemasks.

She didn’t let off the bowstring, but immediately released the arrow when the buck stopped moving at 30 yards.

“I guessed the distance in my head, and I had the sight pins on his side,” Ingraham said.

Once released, the arrow sliced through the buck’s heart and exited on the opposite side of its body.

Ingraham said she would use the deer’s venison for stews, steaks, sausage and beef jerky.

This wasn’t the heaviest buck she’s killed, but this buck’s headgear is the best of her hunting career.

Dennis Shepard of Dink’s Taxidermy in Marion will prepare a shoulder mount and score the antlers. The Ingraham’s may take the mount to the Dixie Deer Classic in Raleigh in March where it would be entered in the Adult Female Bow division.

Ingraham is now in our Bag-A-Buck Contest

Congratulations to Ingraham, who is now entered in our Bag-A-Buck Contest and in the running for these monthly prizes and the Grand Prize package:

Emma Fitzgerald killed this buck on the evening of Sept. 16 with her crossbow. […]