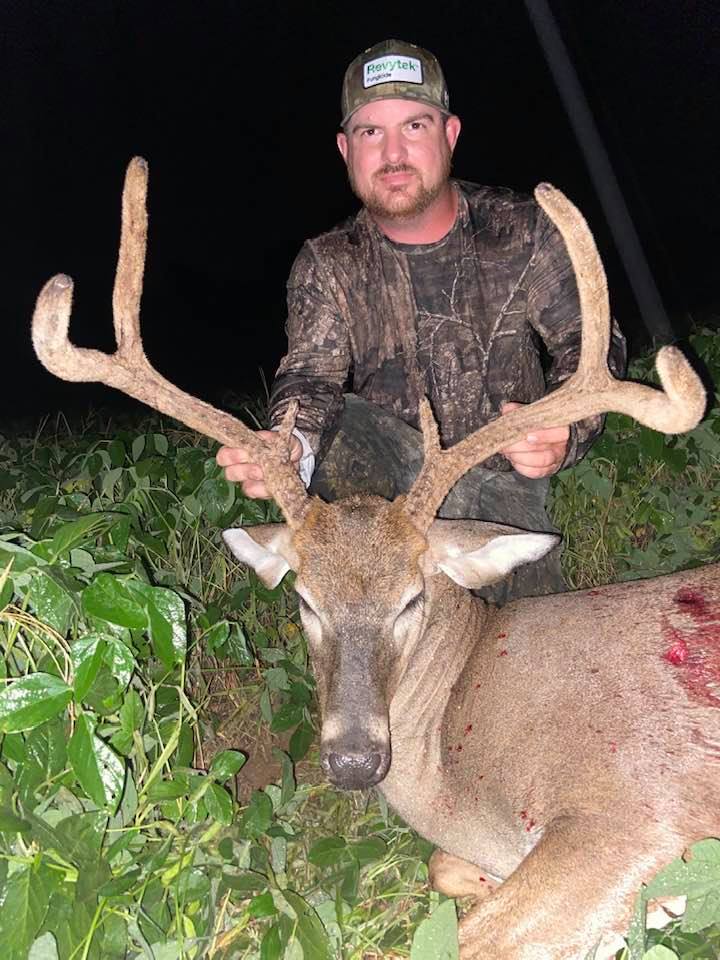 Adam Rorie of Monroe, N.C. killed a one-of-a-kind 6-point buck in Chesterfield County, S.C. while hunting on Sept. 1. The buck was in full velvet, and it’s the buck that he — and some other hunters — were specifically targeting.

“I let a good 130-inch 10-point buck walk that day while waiting on the 6-pointer. One of my buddies with land right next to where I hunt also had the big 6 on his trail cameras. And we kind of battled it out to see who would kill it first,” said Rorie.

Rorie’s trail cameras did not get any photos of the deer last season, but he knew about the buck from other hunters in the area. And as soon as he put his trail cams up before this season started, they captured photos of it.

“Part of the fun of it was that so many other people knew about the deer. So there was some fellowship about it, and we had fun talking some junk to each other about who would get it first. It was all in good fun and added to the excitement of it,” he said.

Rorie’s stand overlooks a bean field, and since his trail cam showed lots of deer activity at all hours of the night and into the mornings, he decided to hunt in the afternoon.

Dozens of deer show up

“I didn’t want to take the chance of running anything off. So I checked the wind for that afternoon and it was good,” he said.

He saw dozens of deer that afternoon, including some that any hunter would have been proud to shoot.

“About 30 deer came in and out of the field while I was waiting on the big 6. Eight or nine were bucks, and I saw at least two bucks that if I’d been anywhere else, or if I hadn’t known about the 6-pointer, I’d have shot without hesitating,” he said.

But the one buck he didn’t see among all of those was his target deer.

“I had checked to see when legal shooting time was over. And it was getting pretty close to that. With maybe 30 minutes left, I heard a deer blow to the left of me. And I thought that was probably him. And I thought it was all over then. I was covered up good, had the wind in my face just right. I was just trying to figure out what went wrong — what scared that deer,” he said.

But he decided he might as well tough it out and sit until legal shooting time was over.

“I decided to sit there until it was time to go. And right at 8 o’clock a deer popped out into the bean field to my left,” he said.

It was the big 6. As the deer walked, Rorie pulled his .270 up, immediately finding the deer in the scope.

“As soon as I put the scope on him, I could see his horns way outside his ears. I said ‘that’s him.’ My crosshairs were right where they needed to be, and I pulled the trigger,” he said.

The deer bolted. Rorie knew he’d hit it good. But he didn’t want to take a chance on losing it.

“I’d decided I was going to shoot him again, on the run if I had to. But he stopped. I don’t know if he stumbled, or if he just decided to stop. I put another one in him. He fell right there,” he said.

Rorie sent a text to his buddy who’d also been hunting the deer.

“I told him he definitely needed to find another deer to hunt. We had so much fun talking junk about that deer to each other. I hated for all of that to end, but I’m glad I got the big 6,” he said.

Congratulations to Rorie, who is now entered in our Bag-A-Buck contest. Click here to enter your buck in the Carolina Sportsman Bag-A-Buck contest. We’re giving away some great monthly prizes, as well as a Grand Prize that includes a Millennium M25 hang-on deer stand and a 2-man, 2-day hunt for deer and hogs at Cherokee Run Hunting Lodge in Chesterfield, S.C.

Chad Gaines of Siler City, N.C. killed two October giants, making his case as one of the state’s top archery hunters of 2021. […]

Chesney Luck got a second chance at an 8-point buck she’d missed during archery season, and this time, fortune was on her side. […]

Jeff Burleson Bag a Buck, Deer of the Year, Newsletters