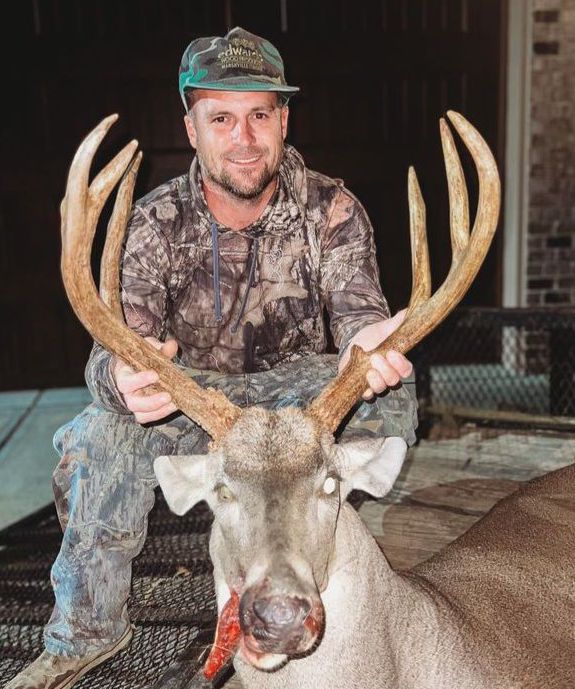 Hunting with his Parker Buckbuster crossbow on Oct. 26, 2022, Marshville, NC’s Blake Ammons killed a Union County hammer of a buck.

Parker arrowed the buck from 30 yards away out of a ladder stand. He had never seen the 8-point buck until that hunt. The deer’s antlers carried mass throughout.

“I’d been watching two separate groups of does grazing a cut corn field for an hour. At just about last light, the buck came out of the woods 300 yards away, heading my way toward the does in the field,” he said.

Ammons watched the buck as it stayed out of range, then retreated back into the woods after checking out the group of does. But that wasn’t the last encounter with the big buck.

“Before I knew it, there was a new group of does 30 yards in front of me. The big buck came back out and headed their way,” he said.

Ammons got ready to take a shot as the buck moved closer.

“He inched closer and I prepared for a shot. I let an arrow sling 30 yards away. I thought I missed. He ran 20 yards and stopped,” he said.

After quickly getting another arrow ready, Ammons stood up for a better shot, and pulled the trigger.

“I heard the arrow hit. So I knew I hit him for sure this time,” he said.

The deer took off, disappearing into the woods where Ammons heard it crash. After 30 minutes, he began searching for the deer.

He found blood and followed it for 50 yards across two creek crossings.

“My flashlight finally saw white belly,” he said. “As I got closer, I could see the mass of the horns and how thick they were coming out of the bases. All the minerals over the past few years have been paying off,” he said.

When he reached the deer, Ammons realized that both of his arrows were in the deer.

“I realized I had hit him with the first shot after all,” he said.

Congratulations to Ammons, who is now entered in our Bag-A-Buck Contest and in the running for these monthly prizes and the Grand Prize package:

Main frame 10pt with a 14” eye guard. Weighed 191 lbs killed in Beaufort County on October 13 2022. I had been chasing this deer for two seasons. His nickname was Hollywood. I’m strictly a […]