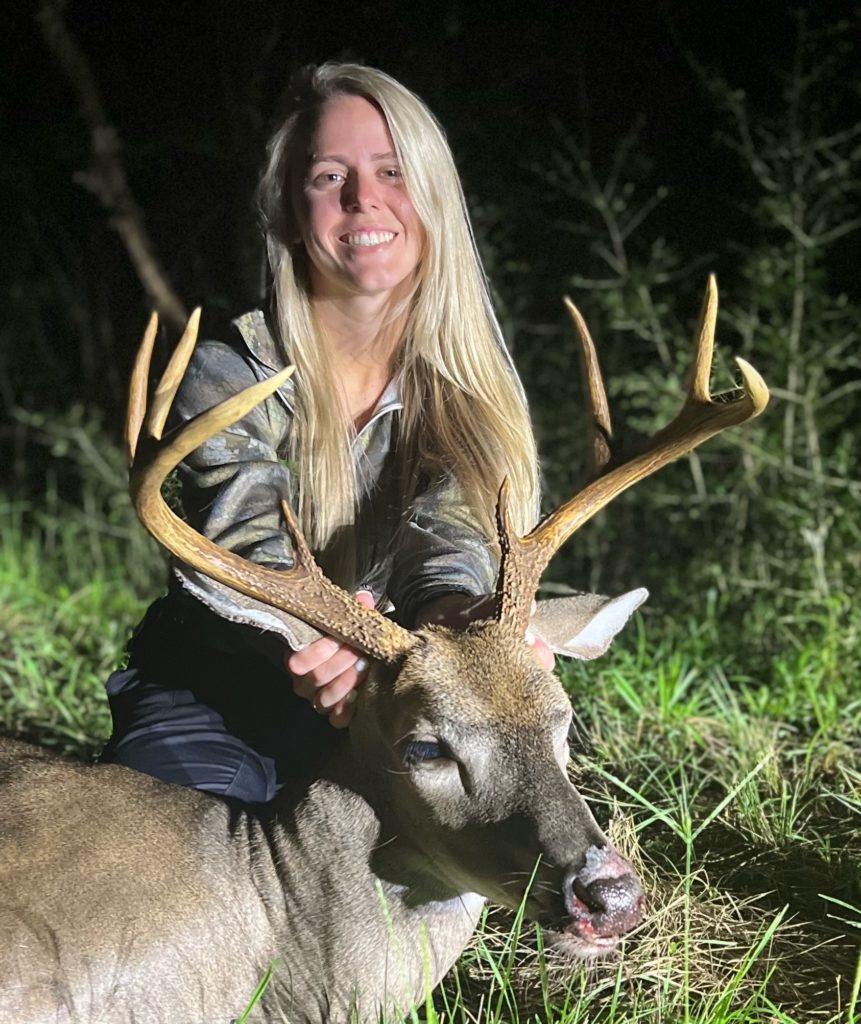 Rosalyn Ballam, of Awendaw, S.C. chalked up her second buck of the 2022 deer season with a wide 8-point from Williamsburg County. It was a hit-list trophy that she had been watching on her trail cam since July.

“His wide rack was a dead giveaway once he stepped out into the lane,” said Ballam.

She shot the deer with her Remington .308 just as he turned broadside and stopped at 175 yards. He was the last deer to come out into the lane, after four does and another smaller buck fed for about 30 minutes in front of her stand.

“All afternoon I watched them looking back over their shoulders at something back in the woods”, said Ballam. “It was 7:20 pm when he stepped out. As soon as I saw how wide he was, I knew he was the one,” she said.

The hefty 8-point buck’s 170-pound body stood out from the crowd when he came out of the woods. Not long after her first sighting, she knew she would be making a shot if given the chance.

“I saw him stick his head out of the tree line and look at my stand. I sat motionless to let him get comfortable, in hopes that he would come on out,” she said.

After entering the lane, the buck moved quickly toward the does and frantically chased them around. Ballam nervously awaited her chance for a clean shot. She watched as the buck moved from doe to doe, lifting his nose in the air. He would stop for just a moment before darting off in another direction toward one of the other does. The smaller buck stood still on the sidelines watching the show unfold.

The buck made his last stand when one of the does turned and darted across the lane in front of him. He was standing broadside looking back over his shoulder when Ballam sent the 168-grain bullet on its way.

“I saw him hunch down and kick out his back legs after the shot. So I knew I hit him in the boiler room,” she said.

The buck ran 40 yards before he dropped in the pine needle covered woods.

After the shot, Ballam called her father, Bram Ballam and asked him to come help her collect her prize. When he arrived, they discussed how the hunt unfolded. He told her the buck would not be far from where she made her shot.

At the point of impact, they immediately found blood on the ground and turned in the direction the deer ran. In the woods they could see the white patch against the dark colors of the ground. It was the rump of the buck facing away with antlers sticking high above its body.

They dragged the hefty buck out to the lane and hugged once again to acknowledge another successful hunt.

Ballam is an accomplished hunter with a proven track record of successful hunts under her belt. At this rate she is going to need a large trophy room to show off all of her bucks.

Congratulations to Ballam, who is now entered in our Bag-A-Buck Contest and in the running for these monthly prizes and the Grand Prize package:

Failure sucks, but when you learn from it and keep going, success usually follows. […]