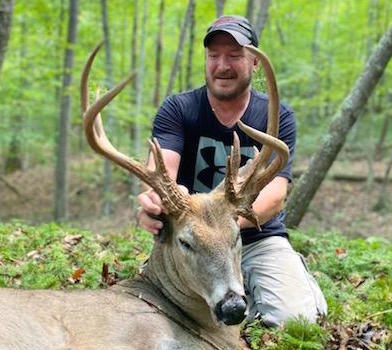 I’ve not had the opportunity to get back into the woods for 3 yrs. In July I went and set out 3 cell cameras to get an idea of what I had to look forward to hunting this fall. This buck was 1 of 3 Bucks that I put on my hit list.

This buck was like a watch during July, Aug and September. Friday September the 10th he was in there like clockwork at 7pm. Come opening day he disappeared. I had him on camera the 13th, 14th and 15th at 4 to 430am. He went nocturnal. I don’t know if he winded me and I didn’t know it the 1st 4 days of Bow Season or the acorns pulled him away.

I thought he had moved to another property or another hunter had harvested him? But, on Sept 28th at 8:35am while at work, he shows up on my camera. So I knew he was back and close by. I left work early that day because I had the perfect wind for that stand. I settled into my stand around 4:30. 6:45 rolls around and I haven’t seen a deer yet!! I wasn’t feeling well that day and had even thought about heading out of the stand early, when at 6:47pm a doe showed up on a camera about 150 yrds NE of my stand, so I thought they are going to move at last light. So, I decided to go ahead and sit until dark.

When about 6:49pm I heard a sound down below me at the creek. I turned and seen the body of a deer about 80 yards away walking down towards the creek. Once I got 1 glimpse of his rack I knew it was him!! He was trying to get downwind of the stand. He was very calm and walking a path to give me a 25 yrd broadside chip shot, when all of a sudden he caught my wind!!!

He locked up, put his nose in the air and was trying his best to see what that smell was. I had an opening approximately the size of a soccer ball and he was 38 yards away. So I knew it was now or never!!

I settled my crosshair from Mathews Mission, and squeezed the trigger! I seen the hit was good but at the angle had passed thru the stomach, liver area as well. So I decided even though entry was good, to wait till next morning. Didn’t take long to pick up blood trail and locate one of the best bucks I’ve ever taken. We rough scored him around 147 inches. Left base was 8.5″ and right was 5.5″ He has 12 scorable points! I harvested him in Stokes County NC, and I reside in Walnut Cove.

Sometimes, a plan comes together like clockwork. That was the case with this Carolina deer hunter. […]