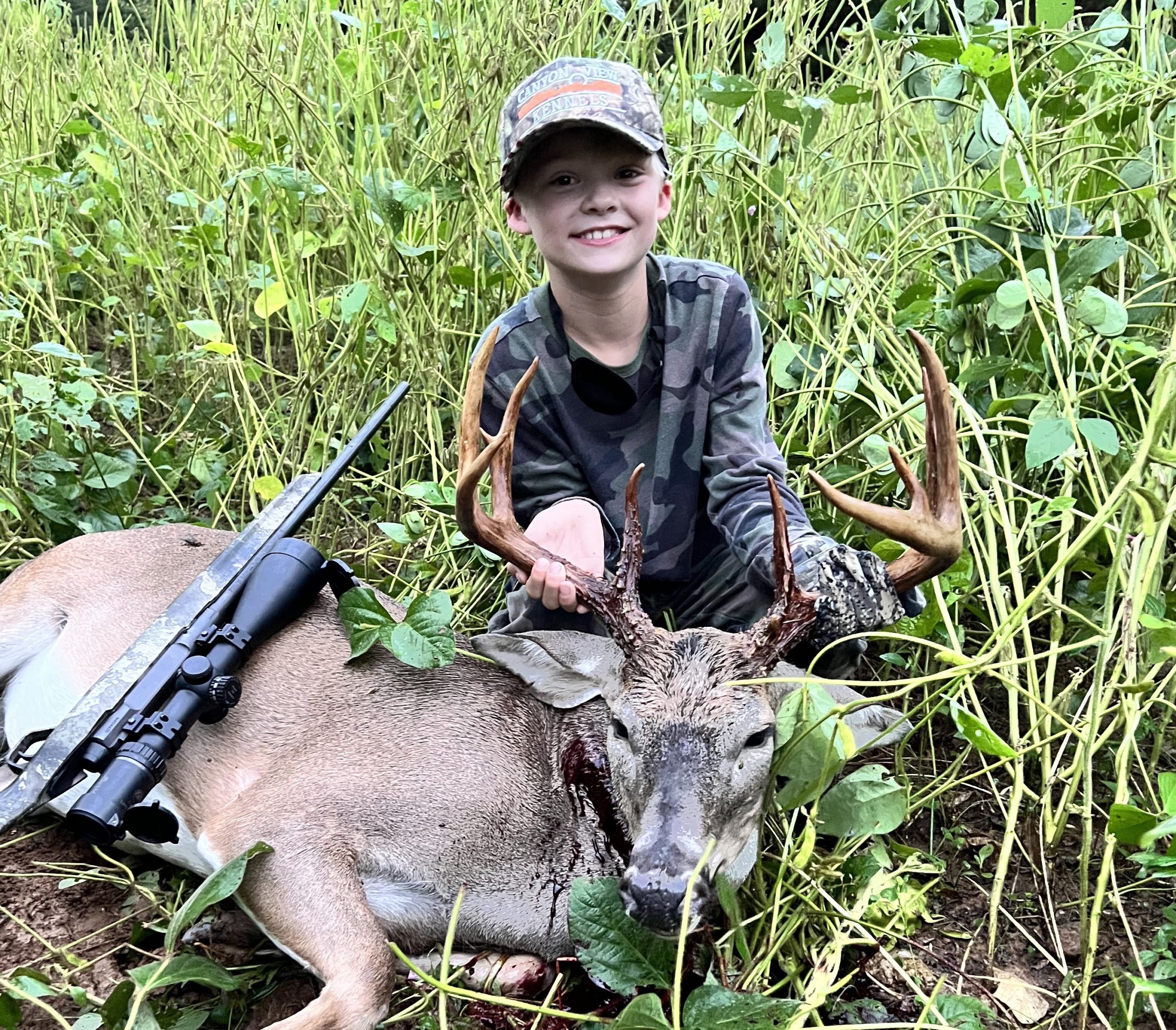 We have history with this buck, he was an 8-point last year, and my son had a shot at him, he connected but we were never able to find the deer. Followed blood for 5+hours. Fast forward a few weeks and the buck appeared on camera, with a scar on his neck. He made it through the end of the year and looked healthy so I knew he would survive.

Fast forward to July, we started prepping the food plots(soybeans and sunflowers fenced in and electric fence), filling the feeders and putting out cameras. We immediately started getting a lot of pictures of does and young bucks but not until the end of July did I get a picture of a good Buck, but he would never get close to the feeder. So I put out another camera on a known trail at the back right corner of the food plot, and he was all over it.

I did not recognize the buck from first being the one my son had already shot until I noticed the scar on his neck. Wow, he had grown from a mainframe 8-point to a mainframe 10-point with all kinds of kickers and character. With other cameras set up around the property (106 acres on the Broad River) we knew where this bucks home was at, he never once showed up on any of the other cameras.

Buzzards try to spoil the hunt

On Aug. 28 I had just got back from a hunting trip in Arizona, and I knew I had to take down the electric fence and start getting the stand ready. Knoll and I headed to the river(while I had maybe 2 hours of sleep coming back from Arizona), but we had to get it done. We got to the river that Sunday around 2:00 pm and I asked knoll to check the stand while I started taking down the fence. Knoll walked to the stand and started hollering at me, Daddy what in the world. Well buzzards had taken over the stand. I was like how am I going to get this thing cleaned our and ready to go by youth day.

We took out both chairs, the carpet and tried to sweep out as much buzzard crap as we could. We were able to get the electric fence down as well.  The chairs were ruined, carpet ruined and stand smelt horrible. I was able to buy two new chairs, found some old carpet in our house and by the end of the following week the stand looked great. We ordered some fake owls to put on the roof in hopes ot keep the buzzards away (it worked).

The week before the hunt, we noticed the weather was not looking good for Saturday, I was getting upset, but I still had high hopes we would be able to catch a break in the weather (Knoll and I had at least 30 man hours of work for this one hunt for youth day). Come Friday evening it was calling for 1.5” of rain for Saturday, at the same time I was getting pics of the Giant buck all over the food plot Friday.

I thought if we can just catch a break in the weather I think we will get a shot at this guy. I woke up at 3 a.m. and checked the weather and it looked like we had a window that morning of only light rain. I got Knoll up, he made his usual three peanut butter jelly sandwiches and we left the house at 5:10. We stopped at Wilson in Little Mountain and we always get gummy worms for good luck before every hunt.

We got to the river at 5:40 and were able to get in our stand and settled by 5:55. By 6:15 we could see all kinds of activity in the food plot, but could not make out the big boy. We sat until 9 that morning and we had deer in front of us until 8:45. We were able to clearly identify four bucks and four does during the morning hunt.

The weather was calling for heavy rain during our evening hunt but we decided to go anyway. And fortunately when we got to the stand that evening at approximately 5:15, we saw on the radar we were going to have one blip of bad weather come through around 6:20.

Right when the bad weather started we had 2 bucks (both we saw that morning) come to the back of the food plot but something spooked them. At 7 p.m. the rain had settled and the same two bucks appeared right in front of us at 40 to 50 yards. They came out and were followed by a doe and yearling about 5 minutes later.

Around 7:20 my son said daddy big buck, big buck, I looked and he was right it was a big 8 (probably 17-inch spread). He was with another smaller 8 and a spike. I asked my son if he wanted to shoot the big 8 as he came out about 40 to 50 yards in front where the other bucks came from. He said No, daddy that’s not the one we’re after.

A few minutes later we had four does and yearlings appear in the far back left corner of the food plot. We watched the five bucks and six does eat for a few minutes and then I noticed some movement coming form the same place where the other five bucks had appeared and it was no doubt him. He had just made his way through the first of three big rows of sunflowers we planted.

Once he made it to the second row of sunflowers, we couldn’t see him anymore. But I had Knoll ready and the rifle on the tripod pointed in the area he should come out. He wanted to know how he could get his heart to slow down. I said buddy just breathe and be ready.

The buck came out of the second row of sunflowers and he was still hard to see. The beans were thick and tall, but when he had his head up, you could see his neck and that was about it. I said son, I think it’s now or never so whenever you feel confident take the shot.

Within seconds he fired off. The tripod the rifle was on popped straight up and kinda caused me to lose track of the buck. I never saw what happened. All I saw was every other deer in that food plot except him leave.

I said bud, I think that joker is dead right there. We were too excited to wait, we were down and at the buck within seconds it felt like. Knoll had shot him in the neck dead center. I said son is that where you were aiming, he responded Dad I don’t know, all I could see was his neck and up and I just don’t know. I said well son that is one hell of a buck.

Knoll counted 14 points (12 scorable 1-inch or better). The deer green-scored 126 gross inches and netted 119. We took a few pictures in the food plot where he dropped, and we took a few more at the edge of the plot. On the way home we ran into a down pour. Thank goodness he dropped him is all I could think. We weighed him at 180 pounds on the dot.

Congratulations to Dial, who is now entered in our Bag-A-Buck Contest and in the running for these monthly prizes and the Grand Prize package:

nclifer01 Bag a Buck, Deer of the Year

Brian Carroll Bag a Buck, Deer of the Year, Newsletters

Rosalyn Ballam, of Awendaw, S.C. chalked up her second deer of the 2022 hunting season with a Williamsburg County hit-list trophy. […]