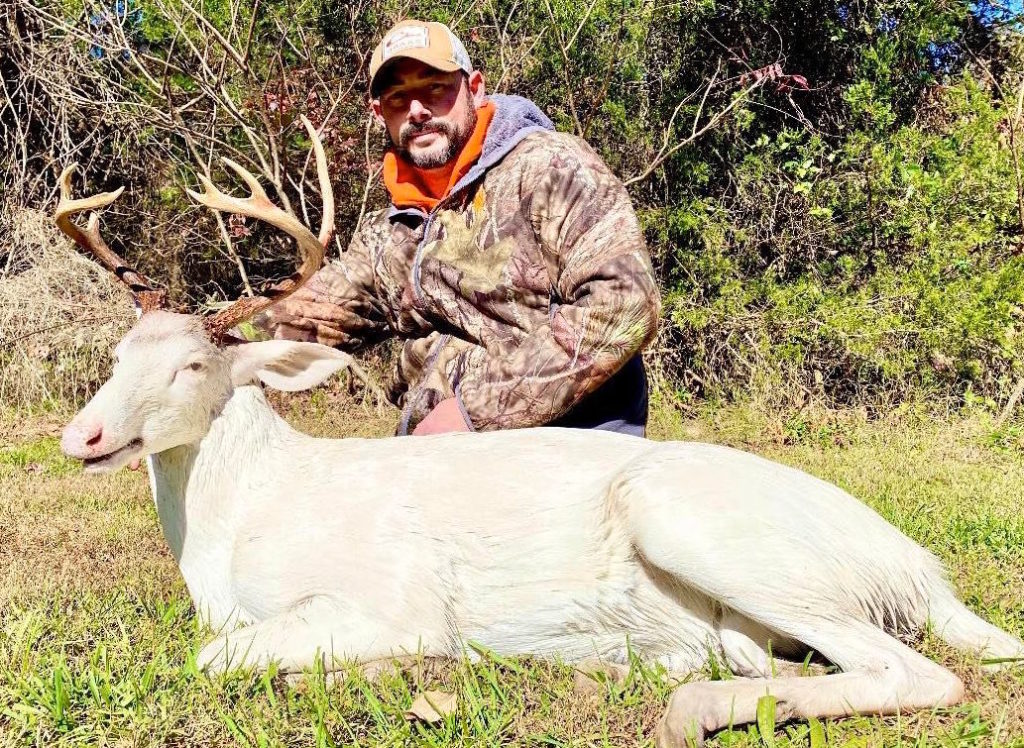 The buck was chasing does when Michael Hall shot it

Michael Hall of Stokesdale, N.C. killed a white 9-point buck during a hunt in Forsyth County on Nov. 15, 2021. He’d watched the deer for two years before finally getting a clean shot at it.

Hall was hunting an area that featured hardwoods joining a swampy area. He shot the buck at 75 yards with a Thompson Center .50 muzzleloader.

He spotted the buck that morning, but didn’t get a chance to shoot. He got back to his stand at noon, planning to sit until dark. But darkness was still a long ways off when the white deer showed up again.

“I saw the buck early that morning chasing does. I went back in at 12 p.m., planning to sit until dark. When I reached my stand, I heard deer chasing immediately. Within 5 minutes, I could see white running through the woods. He was chasing does again,” he said.

When the buck stopped on the edge of the creek 75 yards away, Hall took aim and pulled the trigger. The white 9-point buck fell on the spot. Once he got an up-close look at the deer, he realized just how unique of a trophy he’d killed.

“I dropped him in his tracks. When I reached the deer, I knew I had something I’d never imagined,” he said.

Congratulations to Hall, who is now entered in our Bag-A-Buck contest. Click here to enter your buck in the Carolina Sportsman Bag-A-Buck contest. We’re giving away some great monthly prizes, as well as a Grand Prize that includes a Millennium M25 hang-on deer stand and a 2-man, 2-day hunt for deer and hogs at Cherokee Run Hunting Lodge in Chesterfield, S.C.

Anglers can expect to catch lots of bass at Hyco Lake throughout June. […]