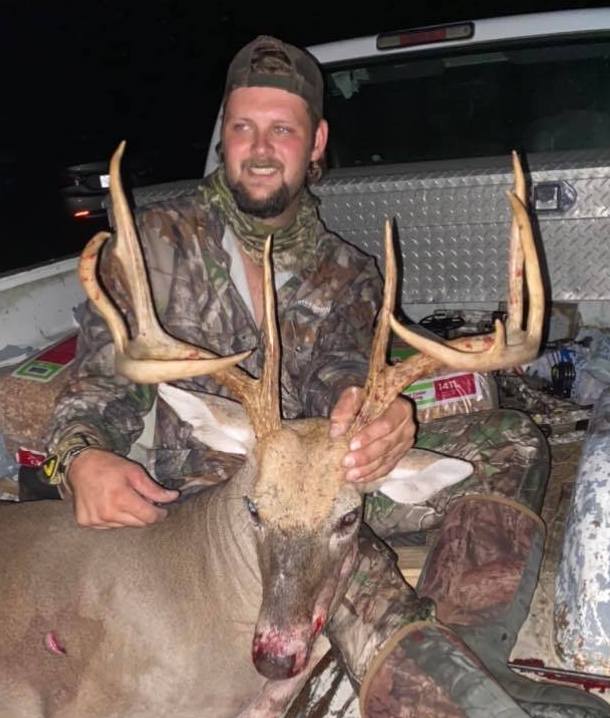 Chaz Clayton of Durham, NC arrowed a trophy 9-point buck in Durham County during an afternoon hunt on Sept. 20, 2022. Leading up to the hunt, he’d had numerous virtual encounters with the deer, which he’d nicknamed “Old Man.” He’d also spotted the deer once before in the flesh.

Clayton and his uncle had estimated the buck at 9-years-old.

Although the buck was a frequent trail-cam visitor, Clayton was still not able to develop a pattern on it.

“I never could get a pattern of this deer. I’ve hunted this deer many different ways and with different strategies. But nothing ever worked. I’d only seen him in person one time besides the day he expired,” he said.

The first time he saw the 9-point buck was during a morning hunt years ago. Clayton was in the stand early — before shooting light. The big buck walked directly under his tree stand.

“I could see his antlers though the light of the moon,” he said.

But the deer disappeared before shooting light.

“Fast forward to this hunt. For the first time, I finally had him on a pattern for about a week. He would come in between 6:45 to 7:30 in the afternoon. I just hoped he would stay on the pattern, since he never had before,” he said.

Once archery season opened, Clayton had another problem. The wind was blowing the wrong direction to hunt his stand — for more than a full week.

A plan comes together

“He stayed on the same pattern, but I did not have the right wind for 9 days straight. Finally, the next afternoon’s weather showed the wind would be in my favor,” he said.

Clayton and his uncle devised a plan that would hopefully put him in position to finally kill the deer.

“My uncle dropped me off so if the deer was bedded down near the location where we thought he was laying, he would be distracted by the vehicle and not me climbing,” he said.

“A little over an hour after being in the tree stand, something catches my eye, and it is him, about 60 yards to my left, circling around straight in front of me. He walked up to a creek bank that was 30 yards from where he was. He just stopped and looked around out into the field that was behind me,” he said.

Shortly after that, the 9-point buck stepped back into the woods, but stayed within Clayton’s sight.

This put the buck immediately in range.

“I pulled back and he gave me a perfect shot at 17 yards. When I shot him, I knew I made a perfect shot. But he didn’t run. He jumped off the creek banks and stood there for a second and then just walked off. This made me second guess my shot placement,” he said.

Clayton gave the buck a little bit of time, called his uncle, and they started tracking. They found the buck within 50 yards, and the shot was truly perfect.

“I finally put my hands on the Old Man after a 5-year journey. God has blessed me with not only an amazing deer but a true legend. A warrior that was estimated at around 9-years-old. The story behind him is like no other,” he said.

Congratulations to Clayton, who is now entered in our Bag-A-Buck Contest and in the running for these monthly prizes and the Grand Prize package:

My name is Jeffrey Dale. I am from Burke County, NC but currently live in South Florida. I drove the 12-hour drive to Caswell County on Wednesday November 9th to hunt for the weekend. I […]

My name is Devin Miles from Sumter SC. I recently killed a palmated 12 point buck with my bow on public land. I killed the buck on October 25th, 2022. I scouted an area twice […]

About Brian Cope 2358 Articles
Brian Cope is the editor of Carolina Sportsman. He has won numerous awards for his writing, photography, and videography. He is a retired Air Force combat communications technician, and has a B.A. in English Literature from the University of South Carolina. You can reach him at brianc@sportsmannetwork.com.
Website

Hunt smarter with a Mountains to Sea e-bike